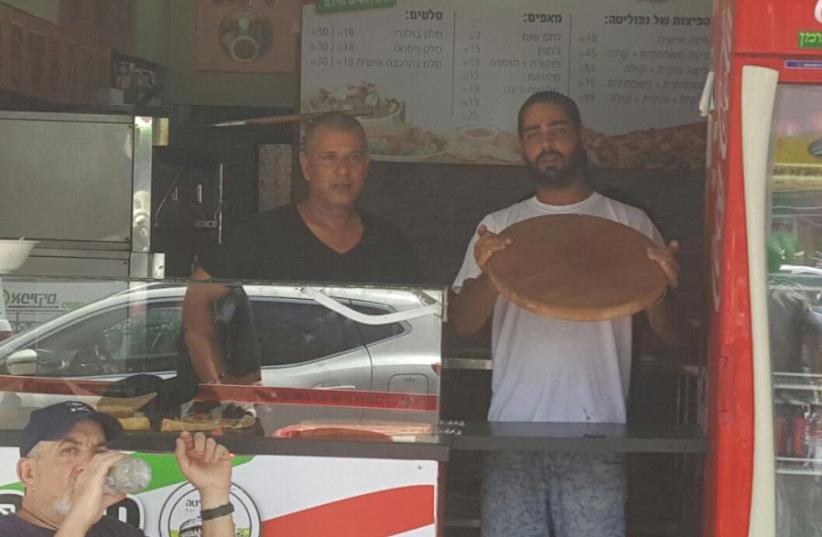 Shlomi Madar, the owner of a pizza restaurant who subdued the terrorist in Petah Tikva
(photo credit: ALON HACHMON)
Advertisement
The Palestinian man who illegally entered Petah Tikva from the West Bank on Monday morning and stabbed an Arab Israeli whom he misidentified as a Jew acted alone, police said, adding that the attack has resulted in heightened security at all West Bank checkpoints.During the late-morning hours, the unidentified 21-year-old suspect from Kalkilya stabbed a 32-year-old Egged bus driver in the neck in front of a downtown shwarma stand before fleeing on foot.“He was looking for Jews to kill, and did not realize the victim was Arab,” police spokesman Micky Rosenfeld said on Tuesday.
Scene of stabbing attack in Petah Tikva (credit: MDA)
The assailant, who witnesses said shouted, “I did it for al-Aksa,” was chased and tackled by a group of onlookers before police arrived at the scene, placed him under arrest, and cordoned off the area to search for accomplices.The victim was treated by Magen David Adom paramedics who worked to stop the bleeding, before rushing him to Beilinson Hospital in moderate-to-serious condition.He is in stable condition and expected to recover, a hospital representative said.Rosenfeld said a joint Police/Shin Bet investigation determined that the suspect – who was released from an Israeli prison last year for unspecified terrorist activity – acted independently.“The area of the attack was cordoned off for more than an hour so police could search for other suspects, and we now know that he acted alone,” said Rosenfeld, noting that heightened security remains in effect in the Central District.“We are trying to determine how the suspect arrived in the area, and Border Police continue to increase security at Kalandia and Bethlehem Crossings to prevent terrorists from coming inside Israel to carry out further attacks,” he added.Monday’s assault followed a weekend of deadly violence, exacerbated by Arab incitement after police installed metal detectors at the entrance to the Temple Mount to ensure that the compound and its mosques are not being used for storing weapons and as a staging area for attacks.Palestinian Authority President Mahmoud Abbas said he would sever security ties with Israel until it reverses its decision regarding the metal detectors.Meanwhile, Hamas and other terrorist organizations have seized on the development to incite zealots by falsely claiming the mosque is under threat; a deadly tactic that helped spur the so-called “stabbing intifada” two years ago.