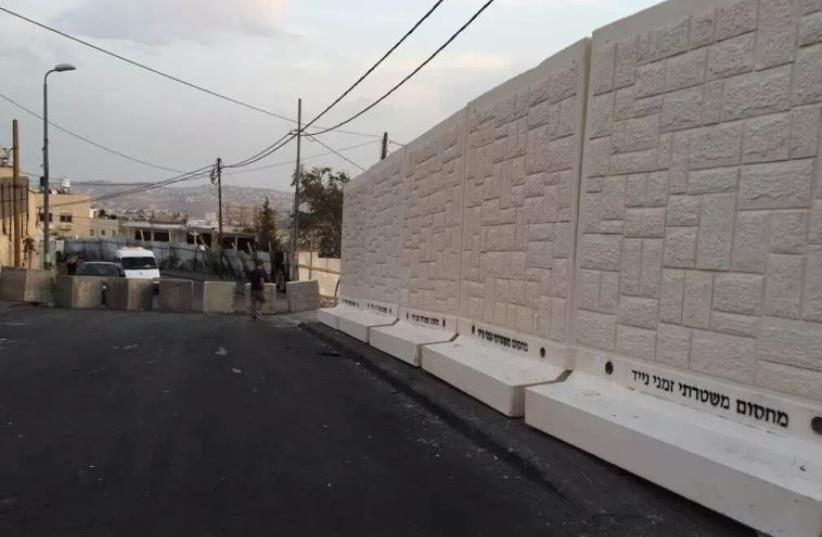 Installing of temporary wall between Armon Hanatziv and Jebl Mukaber in Jerusalem
(photo credit: SHLOMO MOR)
Advertisement
Police on Wednesday removed the temporary concrete wall set up at the entrance to the Jebl Mukaber neighborhood in southeastern Jerusalem, although roadblocks and security checkpoints remain in place.The move comes after numerous human rights groups and left-wing politicians condemned the wall as collective punishment that violated the rights of law-abiding Arab residents. The barrier, about 30-meters long, had blocked vehicular access, but not pedestrian entry, to the Armon Hanatziv neighborhood, where several Jebl Mukaber residents have recently committed terrorist attacks.Police spokesman Micky Rosenfeld said on Wednesday that despite the wall’s removal, Border Police officers continue to man roadblocks and spot checks for all Jebl Mukaber residents traveling to western Jerusalem.While Rosenfeld said the roadblocks have been a game-changer in terms of stopping the deadly terrorism that paralyzed the city, the Association for Civil Rights in Israel said they must be removed.In a statement issued on Wednesday, ACRI said the roadblocks have resulted in mass delays for Arabs attempting to enter the western portion of the city, as well as in the provision of emergency services.“This has resulted in huge traffic jams and disruptions to public transportation, with travel times extended by at least one hour... seriously disrupting access to hospitals, for both patients and staff,” the NGO said.In Isawiya on Mount Scopus, ACRI said that thousands of students who attend schools outside the neighborhood are forced to go through the security checkpoints and wait to be individually checked.“Extensive delays, questioning and searches conducted at checkpoints without reasonable suspicion by police, are unacceptable and degrading acts that treat residents of east Jerusalem as suspects of terrorism,” ACRI said.“These collective actions, enforced without individual consideration or suspicion, cause lasting harm to human rights, including the freedom of movement, dignity and right to privacy.”Rosenfeld dismissed ACRI’s allegations, noting that the roadblocks are a clear byproduct of imminent security concerns following the spate of attacks carried out by Arabs from the targeted neighborhoods.“Those claims are inaccurate and far-fetched,” he said of alleged human rights violations.“Every security measure that is taking place on the ground level has been implemented to prevent terrorists from coming out of Arab neighborhoods.”Moreover, Rosenfeld said the measures have been indispensable in preventing further attacks in west Jerusalem.“The roadblocks have given Israeli police more control of suspicious vehicles that are a potential threat if they try to leave the neighborhoods,” he said. “All security measures are absolutely necessary at this moment in time, and will continue as long as necessary.”On Tuesday night, Rosenfeld said that a Palestinian man was shot in the leg by police during a riot in the Abu Tor neighborhood, south of the Old City, after attempting to throw a firebomb at Border Police officers.“Police spotted the suspect with a Molotov cocktail in his hand and shot him in the leg,” he said. “Locals then removed him from the scene and police are searching for him.”Rosenfeld added that police arrested 15 Arab suspects accused of being involved in recent rioting and attacks on police and Jewish civilians during overnight raids in Jebl Mukaber, Isawiya and Ras el-Amud.“Ongoing police operations are continuing in Arab neighborhoods,” he said.The arrests came hours after acting police commissioner Asst.-Ch. Benzi Sau announced the formation of six task forces with the Shin Bet (Israel Security Agency). Sau added that police expect to make “hundreds of more arrests in east Jerusalem.”Since the beginning of the month, more than 500 Arabs have been arrested, Rosenfeld said.Also on Wednesday, the left-wing NGO Emek Shaveh issued a statement saying that over the past few weeks, settler NGOs have taken over new areas in the capital’s Silwan and the City of David areas.“In all these cases, the settlers’ hold on [to] the new areas by explaining that it is warranted due to security needs and the development and management of archeological sites,” the statement said.“In our opinion, when it comes to Silwan and the Old City, the developments only increase the tension in the area and raise concerns amongst the Palestinians that there are real attempts to change the status quo at the Temple Mount.”Daniel Luria, executive director of Ateret Cohanim, an organization that facilitates purchases of properties for Jews around the world in Arab neighborhoods of Jerusalem, attributed ongoing tensions in Silwan to Arab hostility toward Jews.“As to the tension in the area, this has solely to do with Arab hatred, intolerance, violence, aggression, the Arab refusal to accept any Jewish presence in the region, and an enormous amount of incitement from PA and Hamas leaders, who speak the same language as the [World War II-era] Nazi mufti Haj Amin al-Husseini,” Luria said.