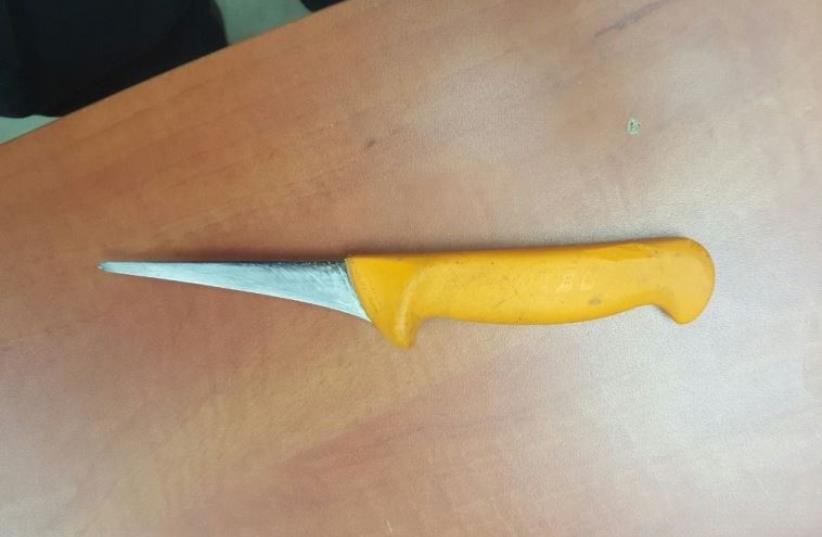 Knife seized by police on April 4, 2016 ‏
(photo credit: ISRAEL POLICE)
Advertisement
Police pulled over what it thought was a suspicious vehicle driving near Latrun towards Jerusalem on Monday morning. After ordering the car to pull over police discovered seven Arabs, residents of the West Bank some who were holding fake Israeli identity cards. Upon searching the suspects' possessions police found a small sharpened knife in the belongings of a 17-year-old youth. Police called for backup and arrested the suspects and their driver, a resident from southern Israel.  On their way to the police station police noticed another suspicious vehicle. The car was stopped following which an additional two Palestinians illegally in Israel were arrested. One of the suspects was holding a fake Israeli identity card. The commanding officer of the Zion area praised the police response. "The alertness of the officers and their ability to identify the unusual, improves security and saves lives," he said.  On Sunday night, the IDF, in a joint operation with the Border Police and Civil Administration, destroyed the houses of three terrorists who carried out a shooting and stabbing attack at the Damascus Gate in Jerusalem's Old City in which one Border Police officer was killed in February.Hadar Cohen, a 19-year-old border policewoman was killed and another female officer critically wounded in the attack carried out by three Arab terrorists wielding machine guns, pipe bombs and knives.