The four West Bank settlements were dismantled during the 2005 Disengagement plan.

By TOVAH LAZAROFF
AUGUST 4, 2017 12:44
Rally at Sa-Nur (Tovah Lazaroff)
Advertisement
Right-wing politicians challenged Prime Minister Benjamin Netanyahu to rebuild the four northern Samaria settlements that were destroyed during the 2005 disengagement.“The Israeli government must redress the terrible injustice that was committed here 12 years ago,” said Deputy Foreign Minister Tzipi Hotovely (Likud).She was one of 13 parliamentarians, including two ministers, who traveled to the ruins of the former Sa-Nur settlement, which was once home to 43 families. Parliamentarians at the protest rally at the site of the former Sa-Nur settlement in Samaria (credit: Tovah Lazaroff)The former communities of Sa-Nur, Kadim, Ganim and Homesh were located in an isolated area of the West Bank, near Jenin.They have been closed military zones since their destruction and Israeli citizens are forbidden to enter.But on Thursday the Samaria Regional Council was given a permit to allow former Sa-Nur families and their supporters to hold a protest at the site, that included a musical performance by Yonatan Razel.Under a military escort they traveled to the hill where the settlement was located, through Palestinian villages, IDF checkpoints and past large red signs signifying entry into Area A, which is under the Palestinian Authority’s control.Along the way they passed a faded road sign for Sa-Nur that was never removed. Settlers at a protest rally on the ruins of the former Sa-Nur settlement in Samaria (credit: Tovah Lazaroff)The parliamentarians called on the government to approve legislation put forward by MK Shuli Moalem-Refaeli (Bayit Yehudi), that would rescind the disengagement decree which allowed for the destruction of the four communities.Earlier in the day, Netanyahu had inaugurated a neighborhood in the Betar Illit settlement in Gush Etzion, saying that no government had been more supportive of settling the land than his.But more politicians trekked to Sa-Nur than followed Netanyahu to Betar Illit. Hotovely criticized Netanyahu’s statement in support of the settlements and challenged him to do more to prove that he stood behind them.“A government can’t consider itself a nationalistic one if doesn’t settle the Land of Israel,” Hotovely said. “We will settle this place,” she vowed.“And then you can invite us to the corner stone-laying ceremony of the renewed settlement of Sa-Nur,” Hotovely added. Settlers at a protest rally on the ruins of the former Sa-Nur settlement in Samaria (credit: Tovah Lazaroff)Coalition chairman David Bitan (Likud) said: “The disengagement was a mistake. Today, everyone knows that.” His remarks also referred to the 21 Gaza settlements Israel razed when it withdrew from the Strip in 2005.“We can’t return to the Gaza Strip, but we can return here. The only way to do it is through legislation,” said Bitan. He pledged to do everything in his power to ensure its passage.“It will be a very difficult task, but with God’s help we will make it happen,” he added.Communications Minister Ayoub Kara (Likud) recalled how he had personally stood with the settlers in 2005, first in the Gaza Strip and then in northern Samaria.“I was among the last people to leave the synagogue in [the former Gaza settlement of] Neveh Dekalim,” he said. Kara was later chastised by the Likud for his actions and was not initially returned to the Knesset in the 2006 election.Communications Minister Ayoub Kara (Likud), MK Motti Yovev (Bayit Yehudi), Social Welfare Minister Haim Katz (Likud), MK Shuli Mualem-Rafaeli (Bayit Yehudi) and Coalition Chairman MK David Biton on the stage at Sa-Nur (credit: Tovah Lazaroff)Samaria Regional Council head Yossi Dagan, who himself is a Sa-Nur evacuee, also recalled the tumultuous events of that summer.Along with the rest of the protesters he had been holed up in a Mandate-era police fortress made of stone.“They forcibly removed us and put us on buses,” he said. “We vowed then to do everything we could to return here and rebuild,” Dagan said.Many of the Homesh and Sa-Nur evacuees still live in Samaria, he added.“Every day when we leave our homes, the knife still turns in our hearts,” Dagan said as he looked out at the same stone structure, one of two still standing in Sa-Nur.“We will do everything we can to return here and fly the Israeli flag from that fortress,” Dagan said.Samaria Regional Council head Yossi Dagan at a protest rally on the ruins of the former Sa-Nur settlement. (credit: Tovah Lazaroff)The IDF had plowed under the other remaining building, a synagogue, that had been completed just before the disengagement.“We have seen how over time the wind, the rain and the longing has brushed away the sand, so that we can see the windows and a corner of the synagogue that is waiting for us,” he said.“It is the only synagogue from the disengagement that was not destroyed,” he said.“The roads and shrubbery are still here. The red and pink flowers are still blooming. The only thing that is missing are the houses and the residents,” said Dagan.On his wrist he wore a plastic orange band, which at the time, was a sign of solidarity with the evacuees.“There is a settlement here, with everything that is ready. There is infrastructure. This is still in Area C [under full Israeli control according to the Oslo Accords]. The only thing that is needed is a governmental decision to return. All I need is a fax giving me permission to start building,” Dagan said. 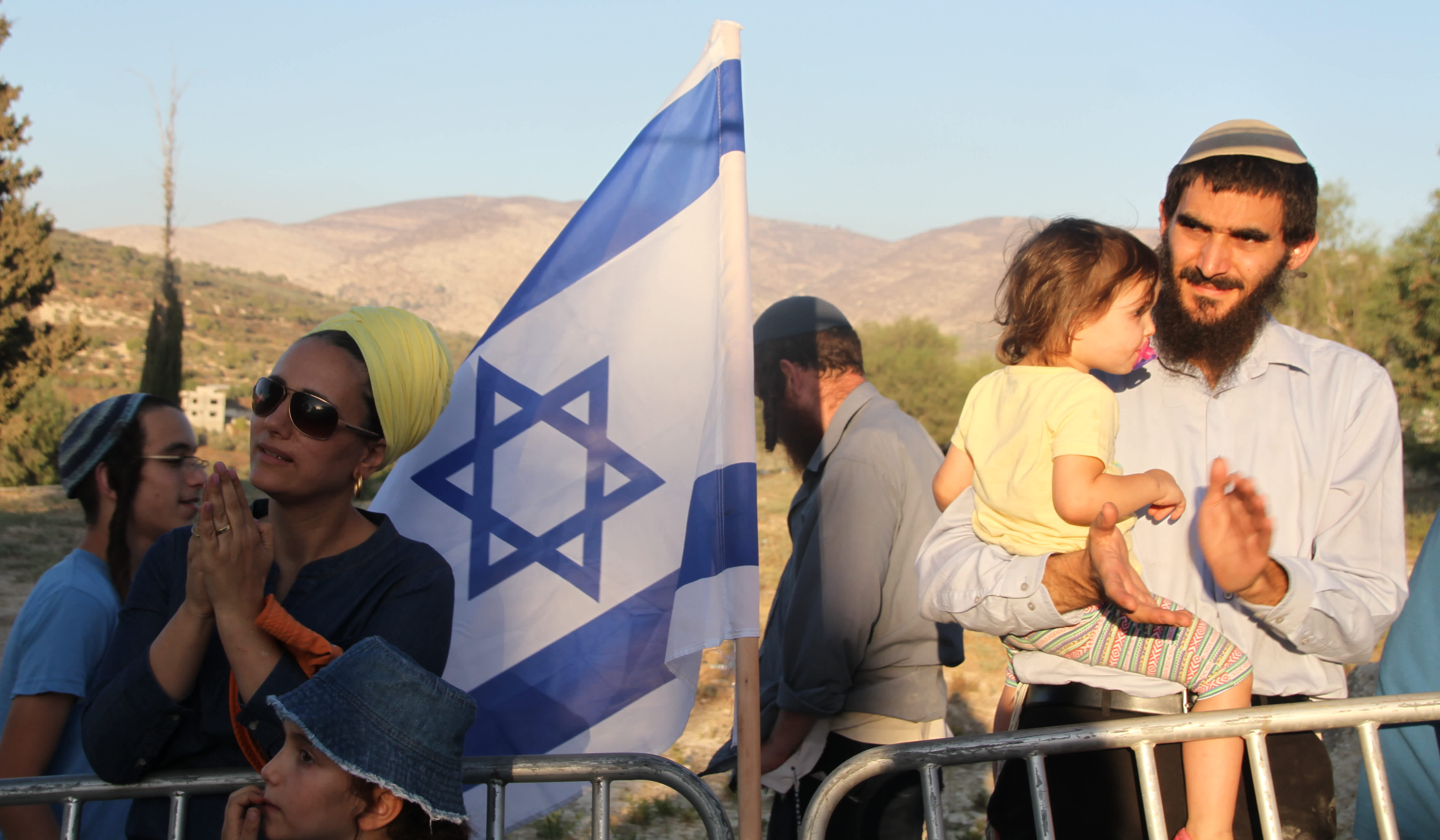 Settlers at a protest rally on the ruins of the Sa-Nur settlement in Samaria. (Tovah Lazaroff)After he spoke the parliamentarians joined him on stage and signed the Sa-Nur compact pledging to realize his vision.“This law gives us hope,” said Sara Har-Malech, 14, of the former Homesh settlement. Her father Shalom, nicknamed Shuli, was killed in a drive-by shooting attack by a Palestinian terrorist in 2003.During the attack Shalom shielded his wife, Limor, who was seven months pregnant with Sara, by placing his body on top of hers.Limor was wounded in the attack and delivered Sara by C-section shortly afterward.With her long brown hair pulled back in a pony tail, Sara stood on the stage during the Sa-Nur rally and read from a letter she had written to Netanyahu.“I was born on the day that my father was killed on his way to Homesh. We survived this terrible attack, but returned home without a father,” she said.“Instead of supporting us, the government pulled us from our homes,” she said.“I am here in Sa-Nur, together with my friends and neighbors, who were evacuated together.”She urged the prime minster to redeem her father’s death by rebuilding the settlement where he lived.“We are asking you: Let us go home,” Sara said.