Erekat asked to remove the flag ahead of his address in which he defended his recent condolence call to a Palestinian terrorist. 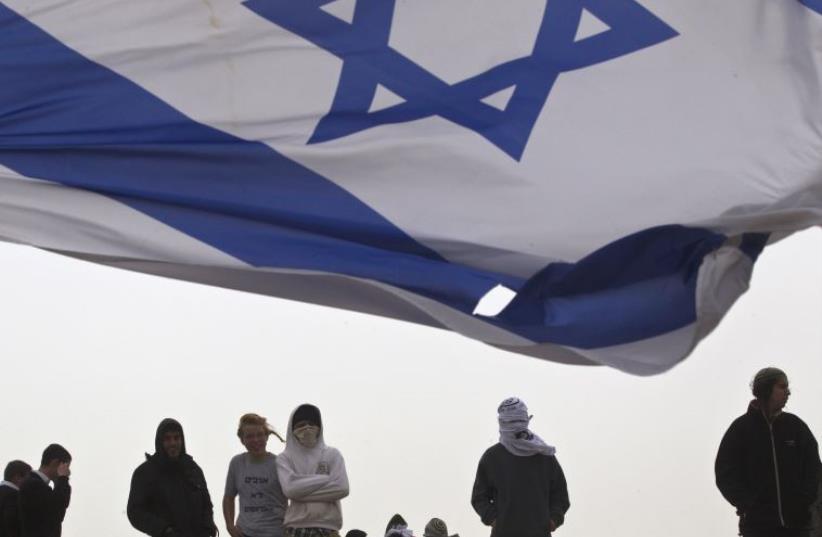 An Israeli flag flutters near Israeli youths as they protest atop the roof of a synagogue in the Israeli settlement of Givat Ze'ev
(photo credit: REUTERS)
Advertisement
Knesset members from right-wing and centrist parties blasted the heads of the Haaretz newspaper on Monday for removing the Israeli flag from the stage of the conference they co-sponsored Sunday in New York, ahead of a speech by senior Palestinian official and negotiator Saeb Erekat.Erekat asked to remove the flag ahead of his address.“The removal of the Israeli flag at the Haaretz conference exemplifies the extreme left’s loss of any remaining national pride,” Yesh Atid leader Yair Lapid told his faction in the Knesset. “Imagine the outcry if an Israeli speaker had asked to remove a Palestinian flag in New York. It’s time for the Zionist Right, Left and Center in Israel to join forces against this kind of extreme behavior. We can’t go on like this.”Lapid referred to Haaretz as “far left” and said that by cooperating with organizations that work against the IDF at the conference, the newspaper had deviated from the path of past leaders of the mainstream Zionist Left.“This kind of behavior leads us to a bi-national state,” Lapid asserted.“The far Left and far Right are together leading us down that path.It is time for a clear distinction in this country between moderates and extremes. The Zionist left of Ben Gurion, of Rabin, would never have allowed something like this, just as the rational right of Begin and Jabotinsky would never have allowed attacks on the Supreme Court and the throwing of stones at IDF soldiers.”Yisrael Beytenu leader Avigdor Liberman blasted President Reuven Rivlin for taking part in a conference that included European-funded Breaking the Silence, an organization which critics accuse of paying former IDF soldiers to tell stories that make the army look bad to the world. The combat soldiers involved in the group though say they speak voluntarily about their own experiences intimidating Palestinian civilians while on military missions in the West Bank.“I have nothing against Haaretz but I do against Breaking the Silence, which does more harm to Israel than Hamas and Hezbollah together with its intolerable libels,” Liberman told his faction. “It is wrong for the president to participate in an event where at the request of the world’s worst besmircher of Israel, our flag is removed. That’s unprecedented, intolerable and unacceptable.”Immigrant Absorption Minister Ze’ev Elkin (Likud) tweeted that Haaretz was “ready to defend all rights except the right to the Israeli flag” and lamented that its publisher Amos Shocken did not even understand why the decision to remove the flag was shameful.Shocken tweeted back to Elkin that his newspaper would obviously defend the right of everyone, including Haaretz, to fly Israel’s flag but there was no obligation to do so.“Rivlin’s office asked to have the flag when he speaks,” Shocken tweeted. “Erekat’s advisers asked for no Israeli flag behind him when he speaks. Reasonable.”Zionist Union MK Omer Bar-Lev, who presented his diplomatic plan at the conference, blasted Lapid for his criticism of the event.“How far will Lapid stoop?” Bar- Lev tweeted. “He expected Saeb Erekat to speak near our flag so he (Lapid) could feel patriotic? What’s next? A Jewish National Fund charity box in Obama’s office?”