President Rivlin: Iran is a threat to the world

Rivlin cautioned that Europe will “have to be very precise” in determining relations with Iran, because Iran is a supporter of terrorism.

President Reuven Rivlin
(photo credit: MARC ISRAEL SELLEM)
Advertisement
Iranian support of terrorism is a threat not only to the region but to the world, President Reuven Rivlin told Lithuanian Foreign Minister Linas Antanas Linkevicius on Monday.Rivlin insisted that Iran cannot be allowed to threaten the very existence of Israel. Aware that some European countries have close relations with Iran, Rivlin cautioned that Europe will “have to be very precise” in determining relations with Iran, because Iran is a supporter of terrorism.Linkevicius said that he wanted to hear more on the Iran issue “because there seem to be some differences in perception of agreements with Iran,” and there is also the need to diminish the threat. “This is something that must be addressed,” he said.The conversation touched briefly on Israel’s conflict with the Palestinians, with Rivlin explaining that negotiations can be conducted only among parties that trust each other. “They don’t trust us, and we don’t trust them.”The overall situation is very complex, he said, and each problem must be tackled individually. 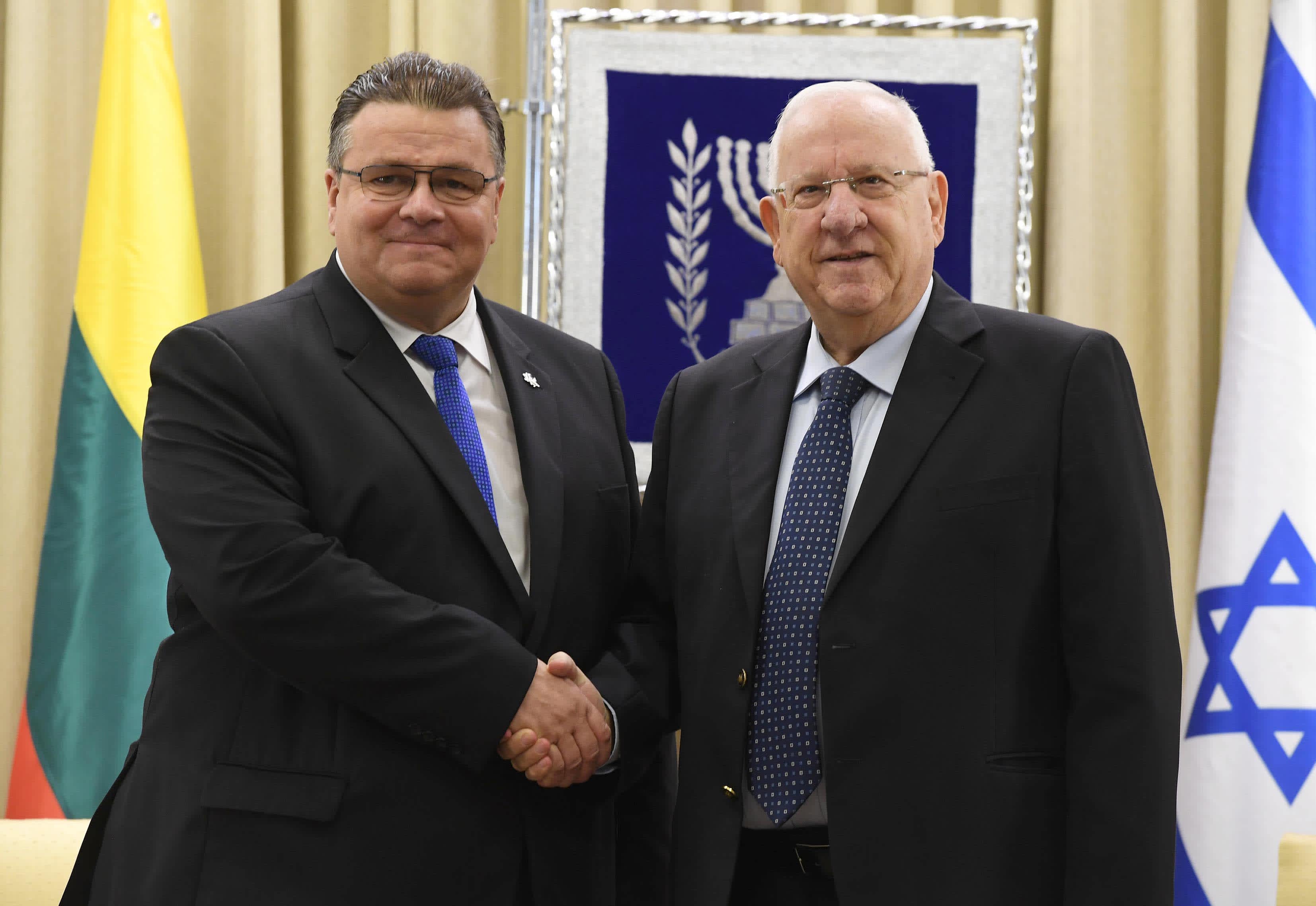 President Reuven Rivlin and Lithuanian Foreign Minister Linas Antanas Linkevičius, September 4, 2017. (Marc Neyman/GPO)“But they’re all related,” Linkevicius said.Rivlin agreed, but insisted nonetheless that each problem be dealt with as a stand-alone.Their discussion focused mainly on security issues but also on their common backgrounds, and on sport.When hosting foreign dignitaries, Rivlin often introduces a sports element into the conversation.On Sunday, he and the prime minister of Macedonia chatted about soccer, and on Monday, Rivlin and the foreign minister of Lithuania bantered about basketball.Linkevicius told Rivlin that Tel Aviv was chockablock with Lithuanian basketball fans who had come to Israel for the FIBA EuroBasket 2017 games. Local Litvaks (meaning immigrants from Lithuania), he said, had been “splitting their hearts” over which team to support in the match between Israel and Lithuania.At one point, Rivlin mentioned that he would inform Defense Minister and former foreign minister Avigdor Liberman that Linkevicius, whom he knows well, was in the country.“We already met at the basketball [game]. I imagine he supported Israel,” responded Linkevicius, prompting Rivlin to remark that Lithuanian basketballers are among the best in the world, and to recall that Lithuanian hoopster Sarunas (Saras) Jasikevicius was a star player for Maccabi Tel Aviv. Linkevicius updated the president with the information that Jasikevicius is now a coach.In greeting his guest, Rivlin said, “I welcome you as a Litvak, as the president of Israel and as a Jerusalemite, adding that Jerusalem is connected to Vilna, which was long known as the Jerusalem of the north. He also suggested that Linkevicius, who is known to be a good friend to Israel, could give UNESCO the facts about that connection.Claiming descent from the Gaon of Vilna (Rabbi Eliyahu Ben Shlomo Zalman), who sent his disciples to Jerusalem, Rivlin said that the idea of a Jewish democratic state had been set down by the Vilna Gaon in 1776, long before Theodor Herzl had conceived of political Zionism.Linkevicius smiled and told Rivlin that he would always be welcome in Vilnius.