In an unexpected move, the IDF announced that the convict was released due to the emergence of new evidence. Haitham Muari's release comes after 16 years behind bars. 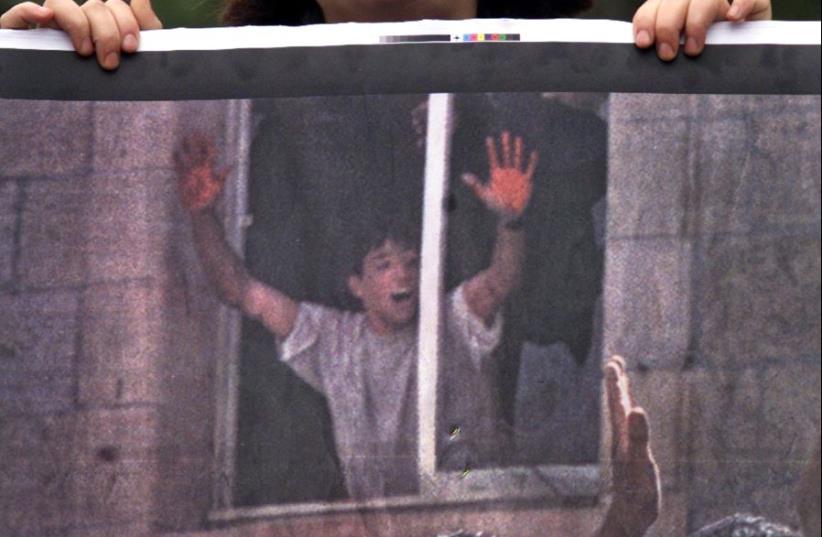 A right-wing Israeli woman blows a whistle in an attempt to disturb a meeting of [Prime Minister Ehud Barak's cabinet outside the Prime Minister's offices] in Jerusalem October 22, 2000. She holds a poster depicting a picture of a Palestinian holding up his hands covered in blood while standing in t
(photo credit: REUTERS)
Advertisement
One of a group of Palestinians convicted in the second intifada Ramallah lynching of two IDF soldiers in October 2000 was abruptly released on Wednesday, after the IDF explained that new evidence had arisen.Haitham Muari was convicted in 2004 of the 2000 murder of one of the two victims, Sgt.- Maj. Yosef Avrahami, and sentenced to life in prison.Yet on Wednesday, the IDF said that Muari had raised new evidence that put into question for the first time whether he had been misidentified and lumped in with a group of Palestinians who had attacked the soldiers, but not participated in their later murder.The Jerusalem Post has learned that the new identification issue may have arisen after Muari learned that security forces at the time had released others in similar circumstances as his, as having been involved in beating, but not killing, the soldiers.Muari’s conviction was voided and he cut a plea bargain admitting to beating the soldiers and failing to prevent other crimes, and was immediately released based on time already served.In October 2000, IDF reservists Yosef Avrahami, 38, from Petah Tikva, and Cpl. Vadim Nurzhits, 35, from Or Akiva, accidentally entered Ramallah. Palestine Authority policemen took them to the local police station, where they were murdered.The shocking turn-around marks an extremely rare instance in which one of the highest profile murder cases in the state’s history has suddenly led effectively to the acquittal of a convict who served 16 years in prison for a crime it now appears he did not commit.The rest of the convicted murderers will continue to serve their life sentences.The horrific photos of Aziz Salha, who is still serving a life sentence for the murders until he was released in the 2011 Gilad Schalit prisoner exchange, throwing his arms and hands up, seen through a window with blood dripping from his hands, went viral worldwide and supported Israel’s argument that it was fighting barbaric terrorism of the worst kind.