In 2014, USA Network's 'Dig' was filming in Israel and had to quickly exit - but insurance doesn't want to pay up. 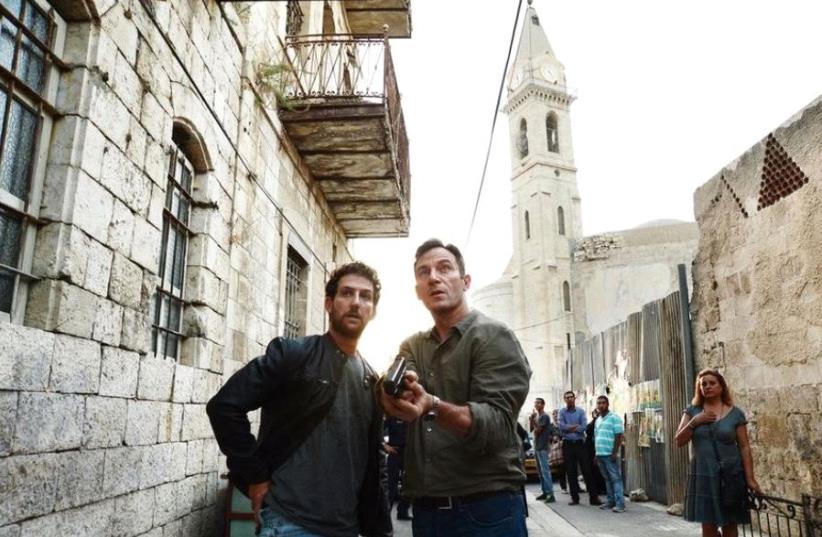 JASON ISAACS (right) and Ori Pfeffer on the set of 'Dig.'
(photo credit: RONEN AKERMAN/USA NETWORK)
Advertisement
Did the events of the summer of 2014 constitute war or terrorism? That is the $7 million question a district court in California will be asked to decide, as a battle between a TV network and its insurance company heads for trial.In July 2014, as Hamas was firing rockets in Israel, and the IDF was preparing for a ground operation in Gaza, a US film crew was faced with a dilemma: stay or go?
The decision to leave cost the production crew of the USA Network show Dig close to $7m. in unexpected expenses. The network filed a claim with its insurer, Atlantic Insurance Company. But the company refused to pay out, saying the policy does not cover war. USA, owned by NBC Universal, countered the claim, saying the events of the summer of 2014 were not war, but terrorism.Last week, both sides filed motions of summary judgment, asking the judge to throw out the case and decide in their favor. That hearing is set for May 22. If the judge dismisses the summary judgment motions of both sides, the trial will begin on July 25.The crew was in Israel to film Dig, a miniseries on the USA Network about an FBI agent investigating the murder of a young American in Jerusalem.They finished filming the pilot by the end of June 2014, and were set to restart filming on July 19, according to court documents. But in the first week of July, Hamas rocket fire toward Israel intensified, with close to 250 launched from the Gaza Strip. On July 8 the IDF launched its offensive operation, which began with air strikes and eventually included a ground invasion.The TV film crew, meanwhile, were unsure what to do. On July 11, they decided to postpone production for a week. But tensions only continued to escalate, and on July 16 they decided to pull out of Israel, and eventually finished filming in Croatia and New Mexico.The change of plans incurred costs of $6.9m., which Universal Cable Productions thinks should be covered by its insurance policy.“At a time when insurer support was most critical – i.e., when the physical safety of cast and crew was at risk – Atlantic turned its back on Universal and disclaimed any responsibility for the claim,” it said in its court filing.And while the Atlantic insurance policy had a “war exclusion,” Universal said it would only apply when the “conflict at issue is between two sovereign or quasi-sovereign states.”Hamas, Universal claimed, is neither a sovereign nor quasi-sovereign state.But Atlantic countered, writing in its motion that the war exclusion certainly applies, since “the conflict lasted 50 days, killed thousands, injured thousands more, and devastated both sides.” Atlantic added that many news organizations, including those affiliated with NBC, referred to the conflict as a war.Both sides cite pages and pages of supporting evidence, from previous case law to media coverage, government reports, emails from NBCUniversal staff on the ground and even dictionary definitions.Universal cited Merriam-Webster Dictionary as defining a war being “between states or nations” – and noted that Hamas is neither.“Atlantic has conceded Hamas’ actions fall outside of ‘established norms of warfare,’” lawyers for Universal wrote in its motion. “The rockets are being fired into civilian areas, which may violate established norms of warfare and armed conflict under international law.”The motion added that the rockets “lack directional controls to ensure they are hitting military [and not civilian] targets... and therefore those rockets cannot be considered ‘weapon[s] of war.’” But Atlantic blasted Universal’s arguments in its own motion.After an amusingly titled onepage section titled “A Brief History of Israel and Palestine,” the insurance company detailed the brutal 50-day conflict and asked: “What else is such a conflict if not a war?” “Plaintiffs prefer to focus narrowly on the actions of only one of the combatants – Hamas – to the exclusion of the other – Israel – and characterize the conflict as mere terrorism in the hope of avoiding the war exclusions,” lawyers for Atlantic wrote. “This position ignores the reality of warfare in the 21st century.”So is it war or terrorism – or mere semantics? Either way, there’s $7m. at stake.