There were no immediate reports of injuries or damage. 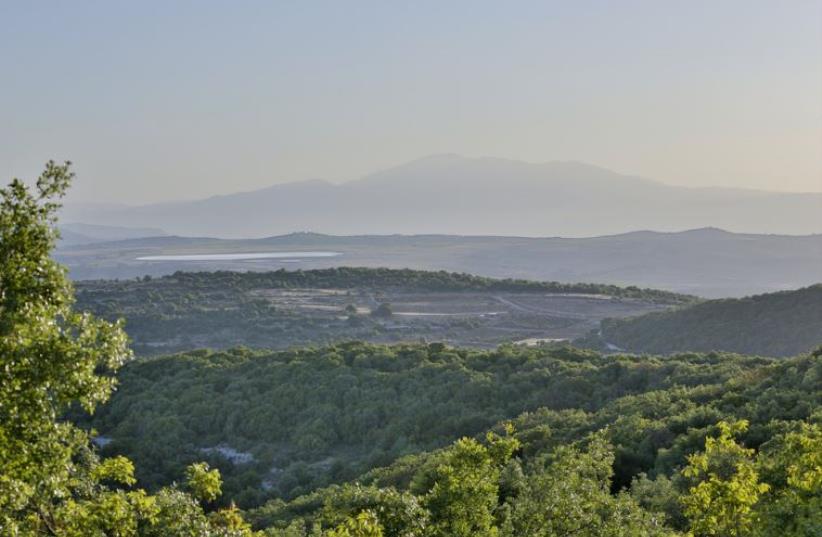 A view of Upper Galilee from Mount Hillel with Mount Hermon in the background
(photo credit: MINISTRY OF TOURISM)
Advertisement
Three rockets are believed to have exploded in the Western Galilee Sunday evening, the IDF said, as forces were searching the scene for rocket remnants. A red alert siren in the northern Israeli city of Nahariya, and its surroundings, preceded the rockets. According to the Lebanon-based Al-Mayadeen television network, a Hezbollah related media outlet, the rockets were launched from a village south of the city of Tyre, Lebanon.There were no immediate reports of injuries or damage, yet local residents reported hearing sounds of the blast nearby. Security forces were investigating the circumstances of the alarm. The mayor of Nahariya, Jackie Sabag, issued a statement saying that, "The rockets fell outside of Nahariya territory.""We are prepared to handle such cases of emergency and have returned to regular operations following a situational analysis."Sabag asked residents of Nahariya to carry on with their normal daily activities. "There is no need for us to open up bomb shelters right now. Should the need arise, we would open them immediately."Lebanese media reported that IDF planes were flying at low altitudes above southern Lebanon following the rocket launches.The alert followed Sunday morning's reports of the death of Lebanese militant leader Samir Kuntar, responsible for murdering the Haran family in 1979 as part of a PLO operation and later joining Hezbollah following his release from Israeli prison.Israel welcomed Quntar's death, saying he had been preparing attacks on it from Syrian soil, but stopped short of confirming responsibility for the strike that killed him.A former national security adviser to Israel said he doubted the strike would escalate hostilities between Israel and Iranian-backed Hezbollah, whose last major confrontation was in 2006. Israel has formally kept out of Syria's civil war which started almost five years ago but has bombed Hezbollah targets there without publicly acknowledging these sorties.Hezbollah, a powerful Shi'ite Muslim group that has sent hundreds of fighters to Syria to support President Bashar al-Assad against rebels trying to topple him, said Quntar was "martyred" in an Israeli raid on the residential district of Jaramana in the Syrian capital, but gave no details.Hezbollah leader Sayyed Hassan Nasrallah was due to speak on Monday evening as both supporters of the group and Syrian loyalist groups said the death of Quntar would be avenged and not be in vain.Jailed in Israel for his part in a 1979 raid in Israel that killed four people, Quntar, a Druse, was repatriated to Lebanon in 2008 in a prisoner swap with Hezbollah, which he is then believed to have joined.  Hezbollah's official media said Quntar would be buried on Monday in a Shi'ite cemetery in its main stronghold of Dahiya in the southern suburbs of Beirut. The party opened a condolences hall to receive the public."Such acts of the Zionist regime (Israel), which have become a consistent method, are the most dangerous forms of state terrorism," Iranian Foreign Ministry spokesman Hossein Jaber Ansari was quoted as saying by Iran's ILNA news agency.Syrian Information Minister Omran al Zubi pointed the finger at Israel but fell short of blaming it directly."The party that gains most from the assassination of Quntar is the Zionist enemy whom we have long known for these cowardly attacks," Zubi told Hezbollah's Manar television station.Official Syrian media said an Israeli aerial strike hit a six-story residential building in Jaramana.