Muhammed Allan, who has been on hunger strike for 59 days, has been put on a respirator according to hospital spokesperson. 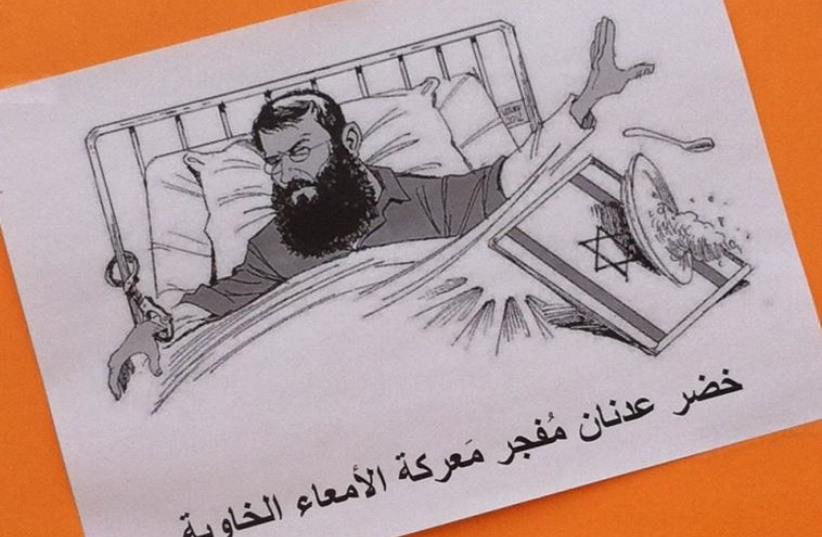 A handout supporting a Palestinian hunger striker.
(photo credit: Courtesy)
Advertisement
Palestinian administrative detainee Muhammad Allan, who was transported to Barzilai Medical Center in Ashkelon on Monday, was put on a respirator and his condition deteriorated on Friday morning, hospital officials said. Barzilai said that it was giving the prisoner liquids and a saline drip and his condition had stabilized. Allan's hunger strike has now lasted 59 days.Both the doctor representing the Red Cross and the patient's lawyer were informed of his condition, hospital officials added.Amid the deterioration in Allan's health, Palestinian sources reported that prisons in Israel were under lock down for fear of riots. The Palestinian Prisoners' Committee said on Friday that several prisons, such as the Ramon prison and the Nafha and Eshel prisons in the south have decided to go on lockdown fearing disturbances by other prisoners in the event that Allan's condition worsens. According to the PPC,  for the first time special units of the Israel Prisons Service are equipped with live ammunition to handle disturbances.  Riots broke out at Shikma prison near Ashkelon on Friday morning which were brought under control. Backup IPS forces were called into the prison. Israeli security forces were also on heightened alert on the Temple Mount, a flashpoint for Palestinian rioting in Jerusalem.  The prisoner Allan was transported to Barzilai from Soroka Medical Center after the Hospital Ethics Committee determined that according to the Patient's Rights Law it is up to the patient to accept or refuse treatment. Allan refused to be fed or treated.In late July, the Knesset passed into law the “Prevention of Damage by Hunger Strikers” bill, which gives authorities the right to force-feed hunger-striking prisoners. The step can only be applied after it is approved by the attorney general and a president of a district court, and only after a doctor determines that the hunger strike, if continued, would cause irreparable damage to the prisoner or that the life of the hunger striker is in danger. Authorities must also first try to get the prisoner to consent to the treatment and make them aware of the realities of the procedure, which would be administered by infusions or tubes forced through the mouth or nose into the stomach, and a prison guard would be able to use reasonable force if the prisoner resists.In a tweet on Monday, Public Security Minister Gilad Erdan, the main supporter of the force-feeding bill, lashed out at the IMA, saying that according to the IMA “there are only two ways the state can deal with a terrorist from Islamic Jihad who is in custody: release him or let him die. This is the conclusion drawn from the pressure being exerted on the doctors.”Hunger strikes have long been a favored tactic of protest by Palestinian security prisoners. In recent years, it has been used repeatedly to protest “administrative detentions,” the procedure in which suspects believed to be involved in security crimes are held in custody for months at a time – and potentially indefinitely – without charge or without being able to see the evidence or allegations against them.The death of a hunger striker is a possibility feared by Israeli security officials because of the possibility that it would prompt a wave of rioting. The force-feeding bill was meant to give authorities the ability to prevent hunger strikers from dying, without giving in to their demands. Ariel Ben-Solomon and Ben Hartman and Noam Amir contributed to this report.