Ben-Artzi admits to Jpost: Haven't spoken to him since Bar-Ilan speech. 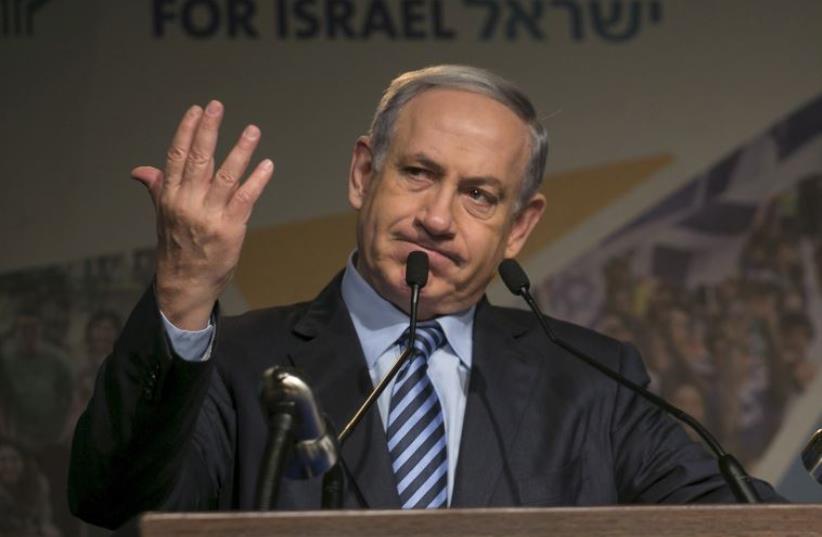 Prime Minister Benjamin Netanyahu gestures as he give an address
(photo credit: REUTERS)
Advertisement
Prime Minister Benjamin Netanyahu is against a Palestinian state and does not believe in the two-state solution, according to Netanyahu’s brother-in-law who spoke to Al Jazeera in an interview published Saturday.Dr. Hagi Ben-Artzi, the brother of Sara Netanyahu and a key figure in the settler community, told Al Jazeera that Netanyahu’s public claims of supporting a Palestinian state were merely a political tactic utilized to appease Western governments and that Netanyahu has no intention of negotiating a final agreement between Israel and the Palestinians.“Unfortunately, the Israeli government, including my brother-in-law, Benjamin Netanyahu, they, unfortunately – I’m sad to say that – agreed to the two-state solution,” Ben-Artzi said. “And here, I must say... I have taken part with my brother-in-law in writing his book, in his famous book, A Place Among the Nations. He writes very clearly against the establishment of a Palestinian state,” he added.Asked by Al-Jazeera if Netanyahu was sincere in past pledges to the US and European governments who have pressured Israel for years to come to negotiated settlement, Ben-Artzi said, “My feeling is that he made a maneuver, some kind of tactic: ‘I will say that I agree, but I will act against it.’” Ben-Artzi added, “I don’t think it’s a good move, although it’s regarded as sophisticated; but I have told him several times, ‘You have to be sincere,’ and I believe, and I know that in his heart and in his mind, he is against the Palestinian state."“[Netanyahu] sets so many conditions that it makes it impossible, practically speaking. So it’s not really lying; he is saying, ‘I’m in favor.’ For example: ‘I’m in favor of flying in the air, but on condition that you give me a plane. You are not going to give me a plane, and so I won’t fly in the air.’ Something like this,” he said.The prime minister has distanced himself many times from Ben-Artzi, who has publicly criticized Netanyahu using strong language. Netanyahu’s associates noted that the prime minister also has far-left activists in his family.Asked by The Jerusalem Post about his current relationship with Netanyahu, Ben-Artzi admitted that they have not spoken since he came out in favor of the two-state solution in a 2009 speech at Bar-Ilan University, though they were in contact for 20 years, ending in 2008.“I have spoken to him many times, but not recently,” Ben-Artzi said. “He is a smart guy, and a smart guy can’t support a Palestinian state. I don’t think he has changed his convictions, which come from deep in his heart. I hope I’m not wrong.”Ben-Artzi said he thought former prime ministers Ariel Sharon and Ehud Olmert shifted leftward when they became prime minister for legal reasons and that Netanyahu was not currently under significant legal pressure. Asked if questioning Netanyahu’s commitment to a Palestinian state on Al Jazeera could be harmful to Israel’s public diplomacy, Ben-Artzi said he believes it is right to prevent Netanyahu from “playing a dangerous double game.”A day before the March 17 election, Netanyahu gave an interview to right-wing newspaper Makor Rishon’s diplomatic correspondent Ariel Kahane that The New York Times and US President Barack Obama interpreted as coming out against a Palestinian state.Kahane said the reports about his interview were mistaken and that the prime minister remains committed to a Palestinian state.In a poll conducted by the Israel Democracy Institute and Tel Aviv University last month, among the Israeli population as a whole, 61.5% said they did not believe Prime Minister Benjamin Netanyahu’s commitment to the two-state solution was genuine, 26.3% thought it was, and 12.3% declined to answer or said they did not know.Since taking office in 2009, Netanyahu has repeatedly spoken of his vision of two states for two peoples.In his first major policy address at Bar Ilan University in June of that year, Netanyahu said, “If we get a guarantee of demilitarization, and if the Palestinians recognize Israel as the Jewish state, we are ready to agree to a real peace agreement, a demilitarized Palestinian state side by side with the Jewish state.”Netanyahu repeated that vision before he met with US President Barack Obama at the White House in Washington DC on November 9.“We’ll never give up our hope for peace. And I remain committed to a vision of peace of two states for two peoples, a demilitarized Palestinian state that recognizes the Jewish state,” Netanyahu publicly told the president.The Prime Minister’s Office said in response to Ben-Artzi’s comments, “The prime minister does not need self-appointed spokespeople. The prime minister has made his position clear when the issue has been raised.”