An Israeli security team went to Cairo about a month ago to review security arrangements needed to reopen the embassy. 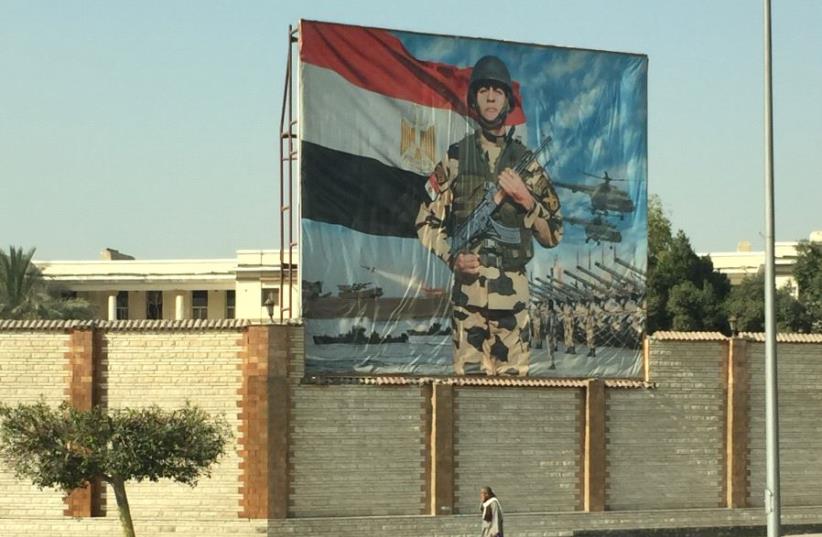 A poster celebrates the Egyptian army in Cairo.
(photo credit: SETH J. FRANTZMAN)
Advertisement
Israel is expected to shortly reopen its embassy in Cairo, some nine months after it was closed due to security concerns, according to media reports on Tuesday.The Foreign Ministry, however, would not confirm the reports, saying it does not discuss security arrangements at Israeli embassies.Ambassador to Egypt David Govrin was pulled out of Cairo with the entire embassy staff in December. He has since been working out of Jerusalem.“Due to security concerns, we have limited the return of the Foreign Ministry embassy team to Cairo,” the Shin Bet (Israel Security Agency) said at the time.Haaretz reported on Tuesday that an Israeli delegation made up of representatives from the Shin Bet and the Foreign Ministry were in Cairo on Sunday for talks regarding the security arrangements needed at the embassy. These talks have been ongoing for a number of weeks.Israel pulled the staff from the embassy at the end of 2016, a little more than a year after it reopened the embassy in September 2015. The embassy was opened four years to the day after a mob invaded and trashed it.On September 9, 2011, during the height of the “Arab Spring” and half a year after Hosni Mubarak was overthrown, thousands of protesters stormed the embassy, using light poles as battering rams to demolish a protective wall around the compound.That incident forced Israel to airlift its diplomats out of Egypt and plunged the countries into a series of diplomatic crises – the worst diplomatic crises between the two neighbors in 30 years.Six security guards took refuge in a safe room in the embassy, and were finally evacuated hours later by Egyptian commandos, following direct intervention from then-US president Barack Obama.Even as Israel is on the verge of re-opening the embassy in Cairo, there is no indication of when it will send its ambassador and staff back to Jordan.Israel removed its embassy staff last month following an incident at the embassy on July 23 when a security guard was stabbed. He then killed his attacker and a bystander.The Jordanian government said last week it will not allow the return of Ambassador Einat Schlein until Israel guarantees that the guard will be investigated and brought to trial.