There are growing signs of improvement in the quality of life for the Arab population and joint regional projects promoted by Arab and Jewish local authorities, Rivlin said. 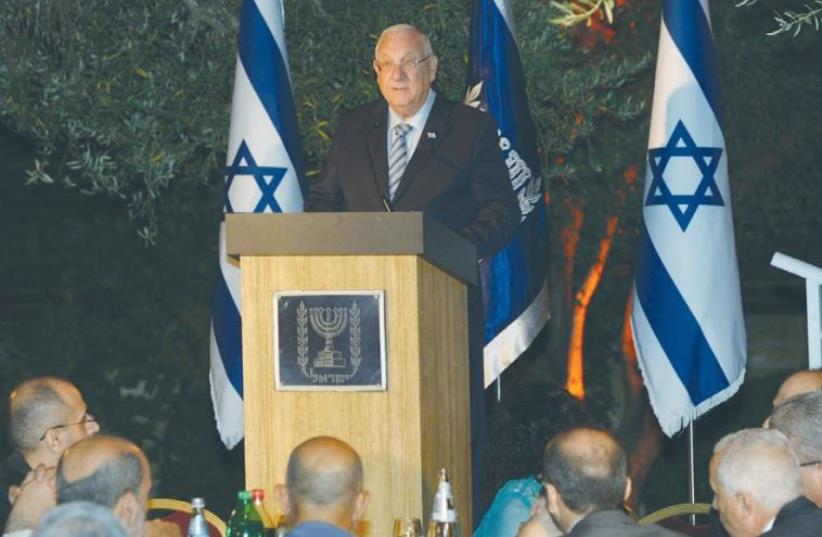 PRESIDENT REUVEN RIVLIN speaks at an Iftar meal on Sunday at the President’s Residence in Jerusalem. (
(photo credit: AMOS BEN GERSHOM, GPO)
Advertisement
Co-existence, peace and equality were the themes in speeches made Sunday at the Iftar dinner hosted by President Reuven Rivlin at the President’s Residence in Jerusalem.Guests included mayors and spiritual leaders from Muslim cities and towns, Ambassadors Hazem Khairat of Egypt, Walid Obeida of Jordan, and Oybek Eshonov of Uzbekistan, Turkish Charge d’Affaires Cem Utkan, Druze IDF officers, academics, business people and members of the Sakhnin junior soccer team. Arab MKs who participated included Esawi Frej of Meretz and Zohair Bahloul of the Zionist Union.Rivlin told the gathering he was filled with hope even though there are times when the public spirit and the political discourse give cause for despair. There are growing signs of improvement in the quality of life for the Arab population and joint regional projects promoted by Arab and Jewish local authorities, he said.Nonetheless, the president was deeply troubled as he spoke of his condolence call that day to the family of 13-year-old Hallel Yaffa Ariel, who was murdered last week as she slept. After that shiva call, Rivlin attended the funeral of Rabbi Michael Mark, yet another victim of Palestinian terrorism.Rivlin deplored that “the Palestinian leadership and society encourage such brutal and criminal terrorism.”Rivlin congratulated Mazen Ganaim, mayor of Sakhnin and chairman of the Committee of Arab Municipal Authorities, for continuing to speak bravely. He commended Ganaim’s courageous leadership and unwavering commitment to the partnership between Jewish and Arab Israelis.Ganaim responded to Rivlin, “Your actions and your campaign for equality prove that you are the president of us all. Jews and Arabs breaking bread together. This is the message that emanates from here. Let us hope that when we meet next Ramadan, we will have achieved equality and peace.”Kadi Abed al-Hakim Samara, the administrator of the Sharia Court of Appeals, lauded Rivlin’s promotion of respect for the other. Samara quoted from a survey taken by the University of Haifa regarding the three most important issues to Israeli Arabs.Housing, surprisingly, was in third place, even though so many Arab families live in overcrowded environments. But Arabs are rarely given a building permit, and thus have no master plan for their respective neighborhoods. The second issue was education, and the third personal safety.