President welcomes UN chief, who says that "fifty years of occupation has had a devastating impact on Palestinian lives." 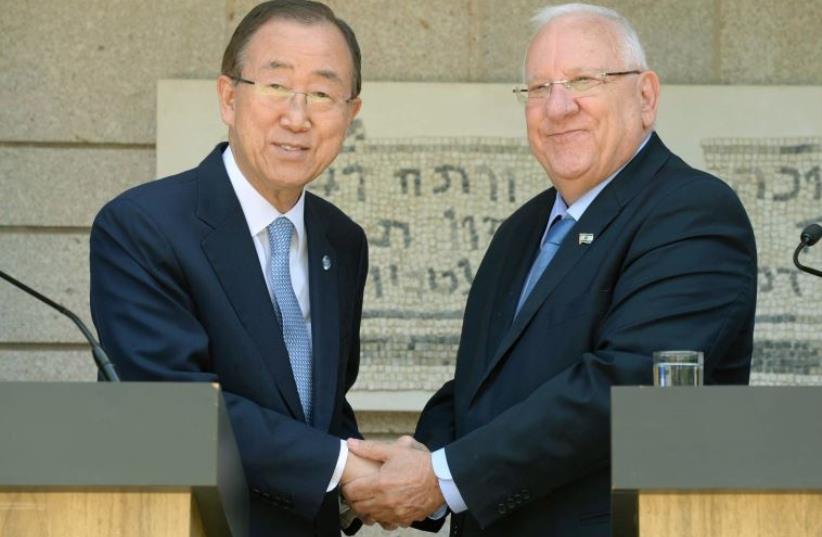 Rivlin and Ban Ki-moon
(photo credit: Mark Neiman/GPO)
Advertisement
In welcoming UN Sec.-Gen. Ban Ki-moon on his 11th and final visit to Israel in his present capacity, President Reuven Rivlin pleaded with Ban on Monday to do his utmost to relieve the pain of the families of soldiers Hadar Goldin and Oron Shaul, pronounced dead by the IDF but believed by their parents and siblings to be prisoners of war missing in action.Rivlin also included the families of two Israeli citizens “both suffering poor mental health – one Muslim, one Jewish.”Hamas still refuses to provide information on the two soldiers, even to the Red Cross, said Rivlin.Turning to developments in the region, Rivlin said that there is closer cooperation between Israel and her neighbors, and that he believes that there is a regional desire to bring an end to the conflict between Israel and the Palestinians.He also welcomed the chance for Israel to renew relations with Turkey.“We have a long history of cooperation, and I believe we have a promising future of cooperation,” said Rivlin. “I understand the many Israelis that disagree or feel hurt by the agreement, but our elected leaders have the responsibility to act in the country’s best interest. There are no shortcuts in the Middle East. Hatred spreads much faster than hope, and the only way to move forward is direct negotiations.”Rivlin thanked Ban for his dedication to the region and peoples around the world, and told him that despite occasional disagreements, he would always be welcome “as a friend of Israel, who knows the importance of a strong Israel.”In addition to his regular entourage, Ban was accompanied by Israel’s permanent representative to the UN Danny Danon, who was congratulated by Rivlin on his recent election to chair the UN legal affairs panel, which also deals with international terrorism. He is the first Israeli to hold this office.Ban said he wanted to use the opportunity of his visit to meet with Israeli and Palestinian leaders, to discuss the way forward. Earlier in the day, he met with innovators at Tel Aviv University who are working to build a better tomorrow.In Ban’s perception, a better tomorrow “means a future free of stabbings, shootings and bombings, which will not achieve anything because violence is never a solution. Such acts are precisely designed to breed fear and uncertainty,” said Ban, who condemned the recent terrorist attack in Tel Aviv.“They eat away at trust and hope, drive Palestinians and Israelis further apart, and strip away a sense of empathy for one another.”He was equally insistent that “50 years of occupation has had a devastating impact on Palestinian lives, undermining the belief in a peaceful resolution to this conflict,” and emphasized that it has not brought security to the Israelis.“Leaders on both sides need to take concrete steps to restore hope and a political horizon, so that the Israeli and Palestinian people see a pathway to peace, not a quagmire of recurring violence,” he said.Ban encouraged Israeli and Palestinian leaders to engage with the Quartet on its recommendations, following its soon-to-be published report on creating conditions for the resumption of meaningful negotiations.Ban reiterated his belief that the only viable solution to the conflict is a negotiated two-state solution, and pledged that efforts towards this goal would be supported by the United Nations.In their public statements, neither Rivlin nor Ban referred to Palestinian Authority President Mahmoud Abbas rejecting the European Parliament’s request for Abbas to meet with Rivlin last week when both were in Belgium.Rivlin told Ban that he was disappointed that Abbas had once again resorted to falsehoods about Israel in his address to the European Parliament.With regard to Abbas’s refusal to meet with him, Rivlin said that this illustrated his contention that it is essential to introduce strong confidence-building measures in order to facilitate a return to the negotiating table.