By JPOST.COM STAFF
AUGUST 24, 2014 10:21
An Israeli boy runs up the stairs in a public bomb shelter.
(photo credit: REUTERS)
Advertisement 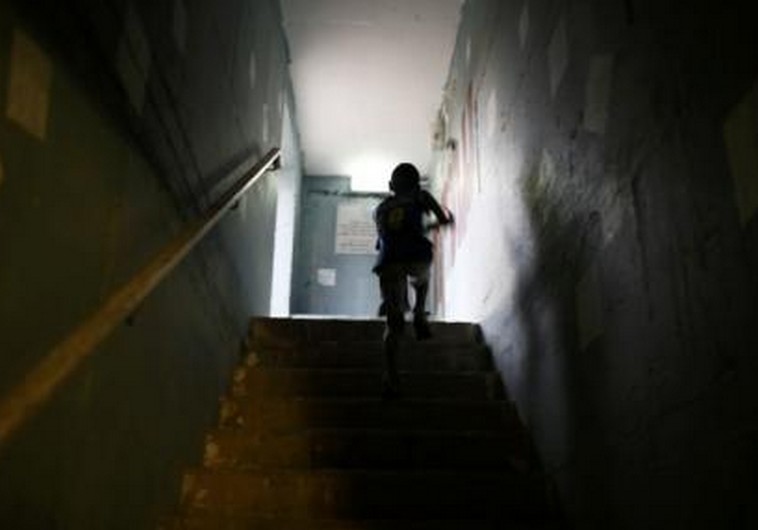 Rocket fire from the Gaza Strip resumed targeting southern Israel on Sunday morning following several hours of relative quiet in the South. On the northern front, projectile attacks emanated from Lebanon and Syria late Saturday and early Sunday morning. On a fifth day of continued fighting since terrorists in Gaza violated a temporary cease-fire last Tuesday, five rockets landed in open areas in the Sdot Negev Regional Council. Rockets pounded the Eshkol area, causing damage to a structure within a community. A man was lightly injured and treated on the spot when a rocket exploded inside a parking lot in an Eshkol community. A second projectile hit a hothouse, causing damage.Multiple Code Red rocket alert sirens sounded Sunday morning in Israeli communities on the Gaza periphery, as over 20 rockets flew across the border. Gaza militants aimed further north just after 9:00 a.m.
as Ashdod and Ashkelon came under rocket attack.In response to the rocket fire, the IDF struck 17 terror targets in Gaza overnight. The military also confirmed that it targeted three Palestinian terror operatives early Sunday.

Terrorists in Gaza continued to fire rockets into Israel late Saturday evening. Two rockets fired from Gaza landed in a residential area in Beersheba, with one lightly injuring two people and destroying a car.Overnight between Saturday and Sunday, five rockets from Syria landed across the border with Israel in the Golan Heights. The rockets landed in open areas and no injuries were initially reported. Multiple alert sirens sounded in the Golan Regional Council warning of the attack The projectile strike from Syria came hours after a separate incident on Saturday night in which a rocket fired from Lebanon hit a building in an open area in the Upper Galilee.Two children were lightly injured by shrapnel and four people were suffering from shock as a result of the attack. The Lebanese news agency NNA, citing its correspondent in Tyre, said the rockets were fired towards Israel and that the Lebanese army had encircled the suspected launch area.No group immediately claimed responsibility for the attack.Last month, two Katyusha rockets launched from Lebanon landed in open territory outside of Nahariya. IDF artillery responded by targeting the launch site in Lebanon.  Ben Hartman, Yaakov Lappin and Reuters contributed to this report.