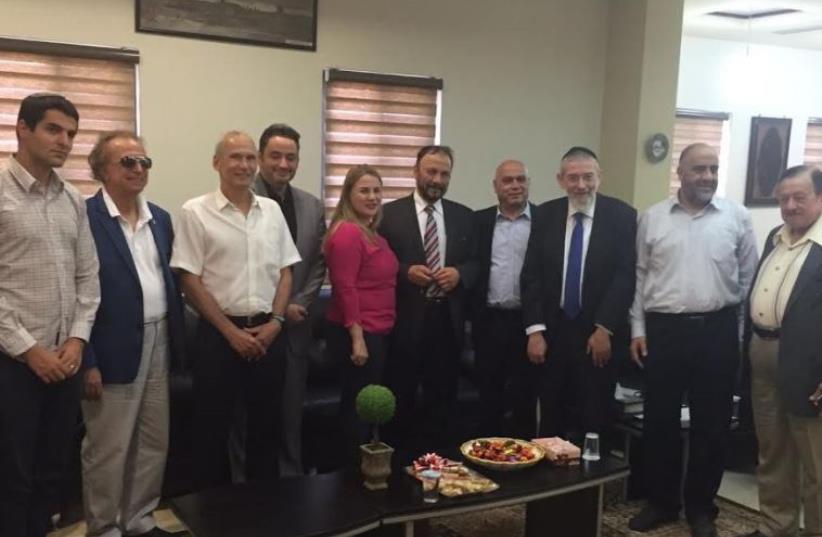 Former Saudi general Dr. Anwar Eshki and a group of Saudi businessmen and academics in Jerusalem, July 22, 2016
(photo credit: Courtesy)
Advertisement
Israel can only normalize relations with its Arab neighbors if it resolves the conflict with the Palestinians, a visiting delegation from Saudi Arabia told parliamentarians on Friday.“Without any advancements in the diplomatic process with the Palestinians there won’t be any advancements with Saudi Arabia or other Arab nations,” MK Ksenia Svetlova (Zionist Union) said as she relayed their message to the press.Parliamentarians Omer Bar-Lev (Zionist Union), Esawi Frej (Meretz) and Michal Rozin (Meretz) also attended the meeting.Saudi general Anwar Eshki led the group of businessmen and academics, who were in Israel in part to promote the 2002 Arab Peace Initiative, also known as the Saudi Initiative. The plan promises Israel diplomatic relations with Arab states in exchange for a withdrawal to the pre-1967 lines. Svetlova said the meetings were important, because Eshki is close to Saudi King Salman and his son, Mohammad. Eshki also heads the independent think tank Middle East Institute, which is working on plans for a bridge between Saudi Arabia and Egypt. The delegation also visited Ramallah and met with Palestinian Authority President Mahmoud Abbas.While in Israel, Eshhki met separately with Foreign Ministry Director-General Dore Gold and the Coordinator of Government Activities for the Territories Maj.-Gen. Yoav Mordechai.Gold confirmed the meeting and said he had established a relationship with Eshki long before taking up his post as director-general.In an unusual event, Eshki had even appeared with him on stage last year at a public event at the Washington based think tank - the Council on Foreign Relations.While he did not discuss the content of their meeting, Svetlova reported that Eshki told Gold to relay the message to Netanyahu that, “without any advancements in the Palestinian arena, there won’t be any rapprochement between Israel and the Arab nations.”Meanwhile on Sunday, the Palestinian Islamic Jihad’s political chief lambasted the visit by the Saudi delegates. “We reject and condemn these visits and call on the leaders of the kingdom and its brotherly people to end this useless act that will cause damage to the kingdom and its people,” Khaled al-Batsh wrote on Facebook.Netanyahu in past months has called for a new peace process based on an amended version of the 2002 Arab Peace Initiative.The Arab League, which has endorsed the plan, has said that it is not interested in amending it.Among the items Israel would like to change is the process laid out in the peace plan, which offers Israel normalized ties after a final status agreement is reached with the Palestinians.Israel would like to normalize ties with its moderate Arab neighbors first, with the idea that it would help pressure the Palestinians to arrive at a peace deal with Israel.Israel also views such ties as necessary to combat extremist terrorist threats in the region.It already has diplomatic relations with Egypt and Jordan, but wants to widen that circle.Earlier this month, Egypt's Foreign Minister Egypt's Foreign Minister Sameh Shoukry made a rare visit to Jerusalem and held a public press conference with Netanyahu.Egypt would like to play a role in leading a regional peace process to resolve the Israeli-Palestinian conflict. Netanyahu has given a nod in the direction of such a Cairo based initiative. Adam Rasgon Gil Hoffman contributed to this report.