By JPOST.COM STAFF, REUTERS, DANIEL K. EISENBUD, BEN LYNFIELD
JULY 27, 2017 09:54
Video shows removal of security apparatus from Jerusalem holy site (credit: REUTERS)
Advertisement
The Muslim Wakf along with the Mufti of Jerusalem announced Thursday morning that Muslims would once again be encouraged to worship at the al-Aksa compound after Israel removed newly installed security measures at the holy site. The announcement raised hopes of an end to two weeks of heightened tensions in the city that is holy to the three monotheistic religions. 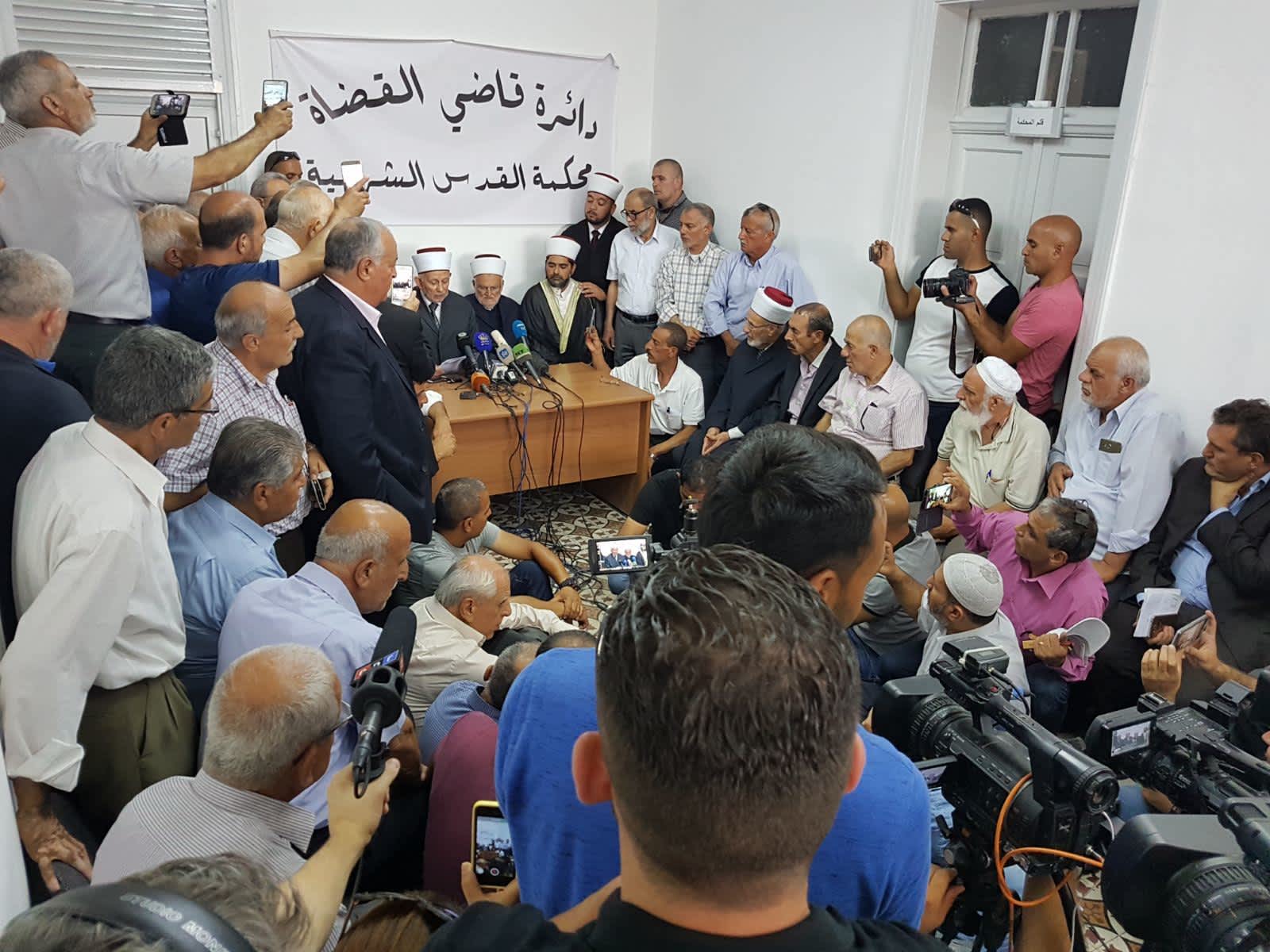 Muslim leaders announce the Muslim return to pray at Temple Mount, July 27, 2017.Security cameras and barricades at Temple Mount were dismantled Thursday morning as a result of the Israeli Security Cabinet's decision to remove the heightened security measures implemented at the site after the July 14 attack where two Israeli policemen were killed. Amateur video shot overnight showed Israeli contractors dismantling gantries put up to hold security cameras and using forklift trucks to take away metal barriers from the marbled Lion's Gate entrance to the mosque compound."The technical report showed that all obstacles the 'occupation' (Israel) put outside Al-Aksa mosque were removed," the head of the Wakf, Abdel-Azeem Salhab, said."We praise this stand in the past two weeks outside Al-Aksa and we want this stand to continue outside Al-Aksa and now inside Al-Aksa," he said, urging worshipers to return to the site. The official Palestinian news agency Wafa quoted President Mahmoud Abbas as saying that afternoon prayers would be held at the mosque after it was confirmed matters had returned to what they were prior to July 14.Wafa reported that Abbas "praised the steadfastness of Jerusalem Muslims and Christians in the face of the Israeli measures against al-Aksa and said their stand was such that the right would prevail and the wrong would pass away."PLO executive committee member Wasel Abu Yusuf told The Jerusalem Post that the lifting of the Israeli measures is "a great achievement for the defenders of al-Aksa and for the Palestinian people against all the efforts to solidify the occupation against blessed al-Aksa mosque.""All the sons of the Palestinian people are called to come to blessed al-Aksa mosque for prayers,"he addedIn a brief statement, Police spokesman Micky Rosenfeld confirmed the development. “The metal detectors and cameras that were put into place outside the Temple Mount after the terror attack on the Temple Mount when two officers were murdered have been removed and dismantled,” he said, noting that he could not add more details at this time.Witnesses said all the security devices had been removed and crowds of Palestinians gathered in the early hours to celebrate. Police spokeswoman Luba Samri confirmed the removal."Everything that was installed after the attack (the killing of the two police officers) was taken down overnight," she said.Police Commander of the Jerusalem District Maj.-Gen. Yoram Helevi said on Thursday morning that he expects many Muslim worshipers to attend prayers at the al-Aksa mosque on Friday, and that he expects attempts to harm police personnel and civilians. “Do not test us tomorrow, and no one should be surprised if there are injuries on the other side,” he said in a stark message to the Palestinians. "I call on the leadership of the other side act to calm the atmosphere, and again not to test us tomorrow." Earlier this week, Israeli authorities had already dismantled the metal detectors it had placed at the entrance to the site which is considere the third holiest to Muslims, the placing of which earlier this month led to widespread outrage in the Muslim world, which claimed Israel violated the status quo and violated freedom of worship.Turkish President Tayyip Erdogan has accused Israel of damaging Jerusalem's "Islamic character", prompting a furious response from the Israeli foreign ministry, which accused the Turkish government of brutally repressing its Kurdish minority and of stifling democracy. But it replaced the detectors with separate security measures, including closed-circuit cameras and low metal gates, further angering Palestinian leaders and the population, who had threatened a "day of rage" on Friday.Education Minister Naftali Bennett condemned the decision on Army Radio, saying that he sees it as a political-security weakness.He also stated that "Instead of strengthening our sovereignty in Jerusalem, a message was conveyed that sovereignty and other areas beyond the Temple Mount could be challenged." Newly elected Labor Party leader Avi Gabbay, also condemned the decision to remove the heightened security at Temple Mount on Twitter. He wrote that the decision was hasty and irresponsible, adding that this type of unbalanced behavior has damaged Israel's security and deterrence.Zionist Union Party member, Yoel Hasson accused the government of having no foresight. Though commending Israel's cooperation with the Wafk, America and Jordan, the MK also stated that a "wise government would never have entered a problem that can not be extricated from without being seen as a loss on the international court."
Jeremy Sharon contributed to this report.