Asalam Khamed was a member of a terrorist cell behind 2010 shooting attack that injured 2 Israelis; Shin Bet: His release is evidence of weakness of PA judicial system. 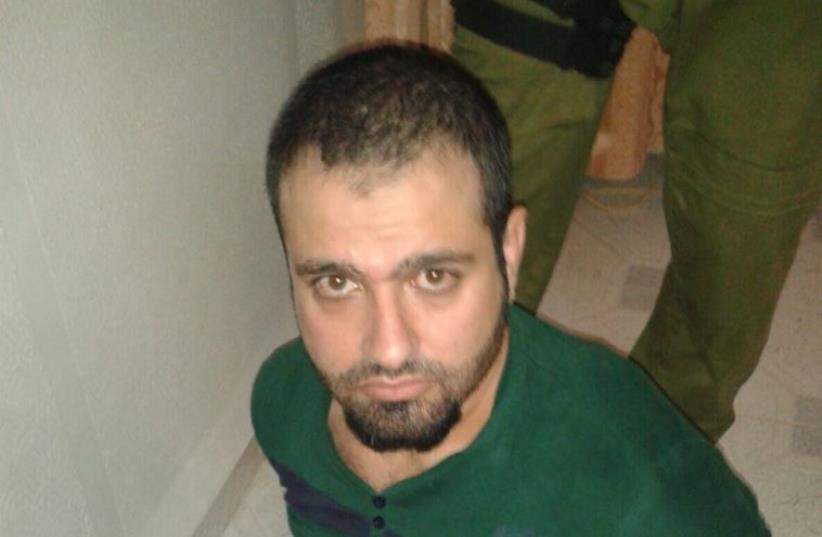 Hamas fugitive arrested by Shin Bet
(photo credit: SHIN BET)
Advertisement
Security forces arrested a Hamas operative early Saturday near Jenin who had been released by the Palestinian Authority despite taking part in a 2010 shooting attack on Israeli civilians, the Shin Bet security agency announced.Asalam Khamed was a member of the Hamas terrorist cell that shot an Israeli couple at Rimonim junction, between Ramallah and Jericho, in September 2010.Husband and wife Moshe and Shira Moreno were wounded in the attack; Moshe with a bullet wound to his knee, and Shira was lightly wounded while escaping the attack.Khamed, 20, a resident of Silwad village northeast of Ramallah, had been jailed on several occasions for terrorist activities.Since the 2010 attack, he had been in Palestinian Authority custody, together with a fellow cell member. Both had been held without a trial. On July 21, the PA released Khamed without coordinating the move with Israel.“Since then, Khamed has been acting as a fugitive,” the Shin Bet said.The manner in which the PA dealt with the terrorist is evidence of “the weakness of the Palestinian judicial system.Most of those held for terrorism in the PA do not stand trial,” the Shin Bet added.Ma’aleh Efrayim resident Moshe Moreno told Army Radio in 2010 that he and his wife, Shira, were driving on Route 60 when a car pulled up behind them and began “riding his bumper.”Moreno said he waved to the driver, signaling him to pass, and “then we took a turn and the car passed us and opened fire.”The terrorists sprayed their car with automatic rifle fire and the vehicle spun out of control, overturning at the side of the road.The attackers were approaching the car when suddenly one of their rifles malfunctioned, and the Morenos were able to escape.“One of the guns jammed and we took the chance to roll out of the car and take cover,” Moshe said. The Morenos hid in a ditch and called police, who rushed to the scene.The village of Silwad, where Khamed comes from, was also the scene of a counterterrorism raid in July 2015, when security forces arrested a Hamas cell suspected of carrying out a shooting attack in June that murdered one Israeli, Malachi Rosenfeld, and wounded three others.Ben Hartman contributed to this report.