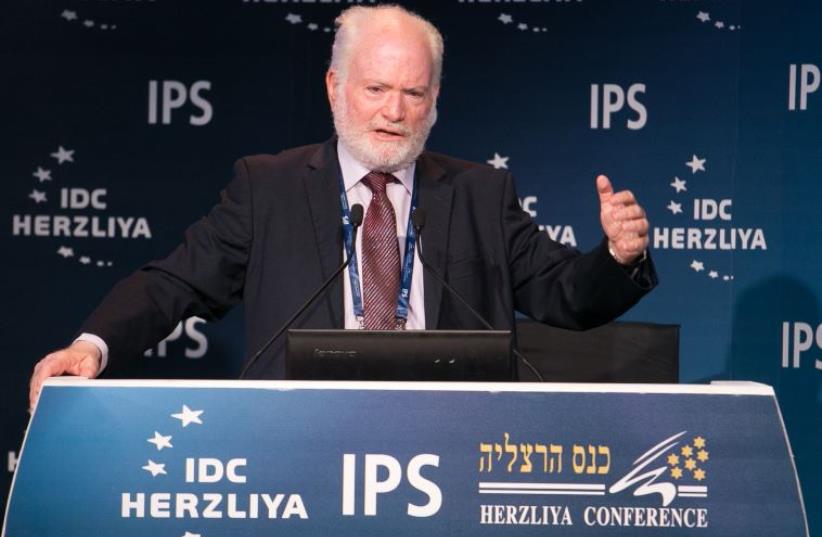 Amos Gilad
(photo credit: EREZ HARODI - OSIM TSILUM)
Advertisement
Maj.-Gen. (res.) Amos Gilad, director of political-military affairs at the Defense Ministry, played meteorologist on Monday, comparing Israel's current security situation to a weather forecast with "clear and sunny skies" and "threatening storms in the distance." The senior defense official was speaking at the 15th Annual Herzliya Conference, where top security and policy experts come together for a series of debates and speeches. In his keynote address, Gilad said that the Lebanon frontier with Israel was enjoying relative calm, even as "200,000 rockets" are aimed at the country from Hezbollah.In Syria, by contrast, where a four-year civil war is raging on, the situation is ever-volatile. Eulogizing "the death of Syria," Gilad said President Bashar Assad only rules a third of the country de facto; with southern Syria currently dominated by al-Qaida and the North by Islamic State. "There is nothing there and it has no future." Syria's president, who is struggling to consolidate control, will continue to lose power, Gilad predicted. "Assad seems like a humanitarian compared to al-Qaida, who look like humanitarians next to ISIS." The most perilous threat, however, remains Iran, who he likened to a Janus-esqe two-headed Greek god – one face of which pushes negotiations with six world powers, as the other works to build up a "Shi'ite empire."   Israel's deterrence is stronger than the threats it faces. As Gilad put it, "Compared to the rest of the neighborhood, the quiet is pretty amazing." The Herzliya Conference, held at the Interdisciplinary Center Herzliya (IDC), is hosted by the Institute of Policy and Strategy (IPS) at the IDC's Lauder School of Government.