The Left-wing organization Yesh Din said that on Saturday afternoon several dozen Israelis had thrown stones at homes and vehicles in the Palestinian villages of Urif and Huwara. 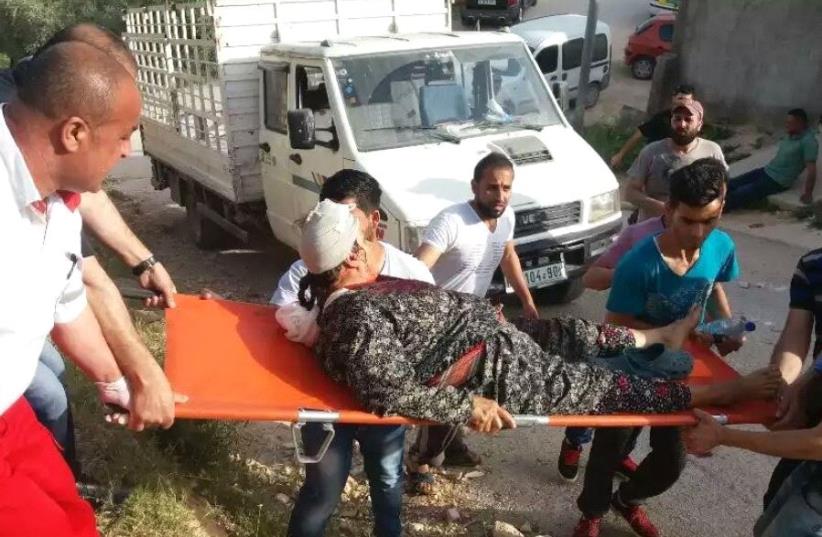 A wounded man is treated at the scene of violent clashes between settlers and Palestinians in the Yitzhar settlement
(photo credit: YESH DIN)
Advertisement
Settlers and Palestinians clashed on Saturday in two West Bank incidents outside the Yitzhar settlement. It followed three other incidents in what was an unusually violent weekend.The Left-wing organization Yesh Din said that on Saturday afternoon several dozen Israelis had thrown stones at homes and vehicles in the Palestinian villages of Urif and Huwara.It provided the media with photographs of shattered windows in vehicles as well as a broken window in a home. One of the photographs showed settlers and IDF soldiers on a hilltop. 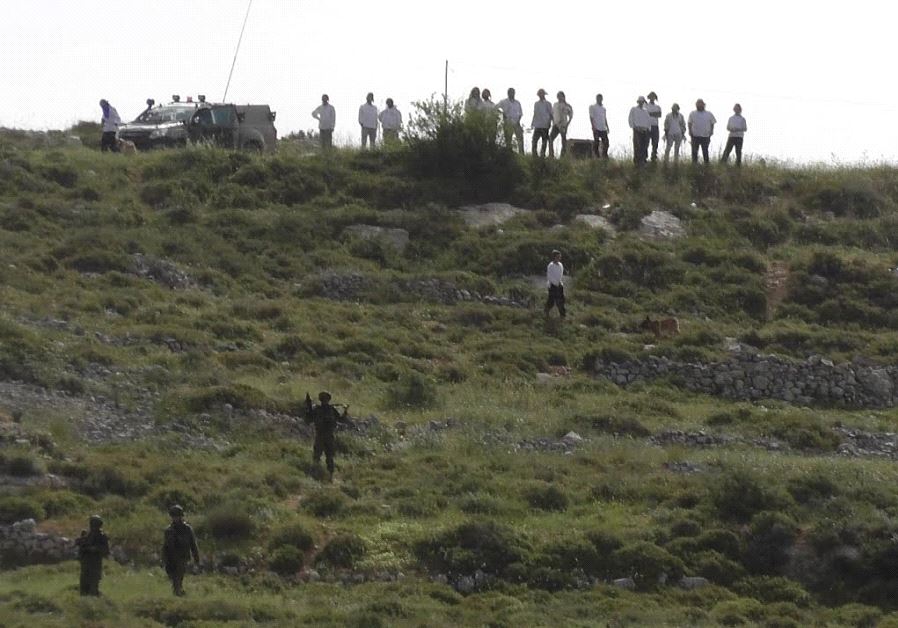 Settlers and IDF soldiers stand on a hilltop outside the Yitzhar settlement
Yitzhar spokesman Avraham Binyamin said that the violence near Urif occurred after Palestinians had come very close to the community and had lit a fire nearby. The settlement has similarly felt threatened by Palestinians in a number of incidents over the last month, he said.With regard to the incident near Hawara, he charged that Palestinians had thrown rocks at Israelis who were hiking in that area.He added that the settlement had hosted an unusually large number of out-of-town guests over the weekend and that he did not believe that anyone from Yitzhar was involved in the incidents.The IDF said that it responded to both incidents and that, in the case of Urif, had used riot dispersal methods to quell the violence. An IDF spokeswoman said that in Urif Palestinians had thrown firecrackers at the soldiers.Two Palestinians were wounded in Urif and one in Huwara, she said, but added that she did have any more details on their injuries.Yesh Did alleged that the soldiers shot and wounded four Palestinians in Urif with rubber bullets and that two Palestinians were harmed by stones in Huwara.“A [Huwara] woman was evacuated to the hospital after she was moderately wounded by a rock, according to reports,” Yesh Din said, adding that “a relative of the woman was also wounded and treated at the scene.”On Friday, settlers attacked a group of Left-wing activists who had gone to the West Bank to protect Palestinian goat herders.The attack took place about a kilometer from the Baladim outpost on a rocky hilltop so remote that even a vehicle cannot access it, explained Rabbi Arik Ascherman.The well-known activist now heads an interfaith organization called Haqel – Jews and Arabs in Defense of Human Rights. He was there along with members of the Ta’ayush organization and Sarit Michaeli of B’Tselem.A five-minute video filmed by the activists showed the group of teenagers and young men charge across the barren terrain, some of them wearing hooded sweatshirts. They picked up rocks and threw them at the activists. A few of them hit the activists with sticks, yelling at them, “get out of here.” Some of them wore hooded sweatshirts. They picked up rocks and threw them at the activists. A few of them hit the activists with sticks, yelling at them, “get away from here.”Ascherman told them “stop acting crazy.”According to B’Tselem, which released the video, he was one of three activists who was lightly wounded.The activists reported the incident to the police, who did not respond to requests for a comment.