The orders are a preventative measure as non of the activists in question have been charged with involvement in any Jewish terror attacks or in hate crimes against Palestinians. 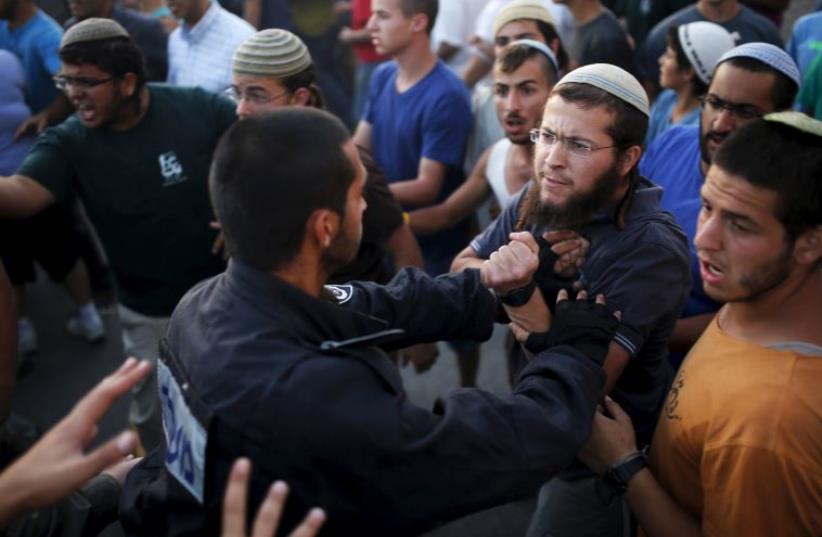 Jewish settlers (R) scuffle with Israeli police officers near buildings slated for demolition by order of Israel's high court in Beit El
(photo credit: REUTERS)
Advertisement
The Shin Bet on Sunday banned 10 Jewish activists from Judea and Samaria – many of whom are minors – as part of a general crackdown on the extreme right wing in the wake of last month’s terrorist attack in the Palestinian village of Duma.Restrictions placed on the activists by the Shin Bet (Israel Security Agency) beyond banning them from Judea and Samaria for a set period of time varied, including late night curfews or total confinement in their homes, as well as restraining orders forbidding them from contacting certain friends.The restraining orders are a preventative measure as none of the activists in question have been charged with involvement in any Jewish terrorist attacks or in hate crimes against Palestinians, often described as “price-tag attacks.”“They’re in hysterics,” said the nongovernmental organization Honenu, which provides free legal assistance to activists.“They [the Shin Bet] are handing out administrative orders as if they were fresh rolls,” it said.The Shin Bet, however, said that the orders met the guidelines the security cabinet set to combat Jewish terrorism and hate crimes in the aftermath of the Duma attack, in which two homes were torched, allegedly by Jewish extremists, killing Saad Dawabsha, 31, and his 18-month-old son, Ali.Due to a number of terrorist attacks that have been carried out recently, including ones in which people were killed, the Shin Bet recommended restraining orders against the 10 activists, which have been signed.The orders are part of “the unyielding policy against terrorism,” and are aimed at “dismantling the terrorist infrastructure that has been responsible for these attacks and to prevent further actions.”The restrictions were put in place to keep the activists from reaching illegal West Bank outposts, in particular “Baladim.” It is from these outposts that some people left to execute terrorist attacks, the Shin Bet said.It added that it was determined to prevent terrorist activity and to bring its perpetrators to justice.To date, however, no one has been charged with the Duma attack.