Hamas funds were said to be used to carry out attacks against Israel. 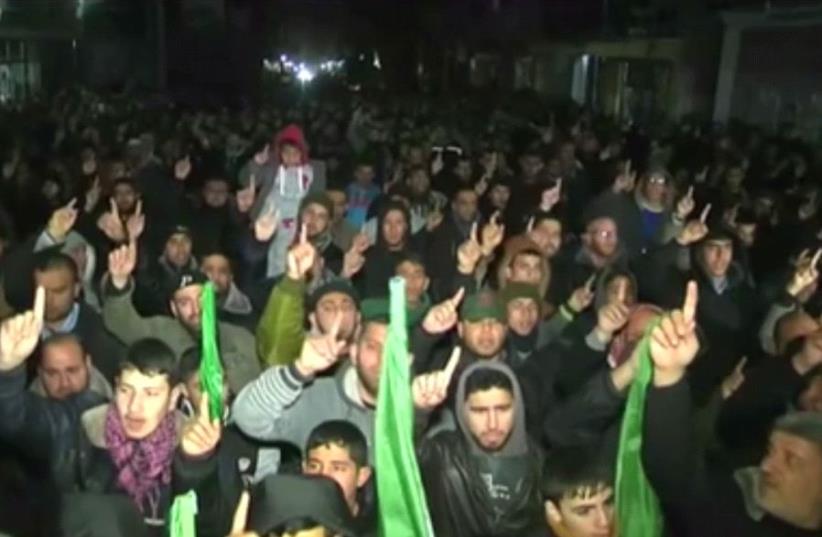 Hamas holds rally in Gaza to celebrate terrorist ramming that killed 4 Israelis
(photo credit: screenshot)
Advertisement
Security authorities have thwarted attempts in recent months to smuggle funds to terrorist organizations in the Gaza Strip and the West Bank, the Shin Bet (Israel Security Agency) announced on Wednesday.The smuggling was facilitated by transferring debit cards through the Erez crossing via messengers and outgoing mail from the Gaza Strip.The suspects are said to have obtained the PIN numbers to withdraw the money from ATMs in several ways, such as by calling Hamas members in Gaza or by having it written on the card.Gaza resident Salim Fawzi Tutah and West Bank resident Ismail Ahmed Muhammad Hawamidiyya were arrested in November and December 2016, respectively, for their involvement in the transfer of funds.According to the Shin Bet, 26-year-old Tutah had received a permit to enter Israel to work as a tractor driver for a Palestinian contractor as part of a project of USAID in the West Bank.Tutah is suspected of delivering to Islamic Jihad cells in Jenin a debit card loaded by a Hamas official with thousands of shekels.Hawamidiyya, 26, a Hamas member from the Hebron region, is suspected of having received debit cards from Hamas by mail.During their interrogation, important information was gleaned about the methodology of terrorist organizations transferring funds, particularly how they make use of the entry permits issued to Gaza residents, the statement said.“Terrorists in Gaza are continually working to promote terrorism in the West Bank,” and are funding terrorist organizations in the West Bank to “carry out military operations against Israel and its citizens. The State of Israel allows thousands of residents of the Gaza Strip to enter Israel each month for humanitarian purposes; terrorists take advantage of these permits for illegal purposes, including the transfer of funds for terrorism,” the statement read.“These investigations once again demonstrate how Hamas and other terrorist organizations in the Gaza Strip are cynically exploiting the willingness of Israel to facilitate the entry of civilians into Israel and the West Bank by using permit holders to further the purposes of terrorism.”