Shootout in Jenin between Palestinian forces and gunmen wounds three

Wasfi Qabaha, a senior Hamas official in Jenin, said that the gun battle erupted as a result of a “misunderstanding” between a number of youths and a security officer in plainclothes. 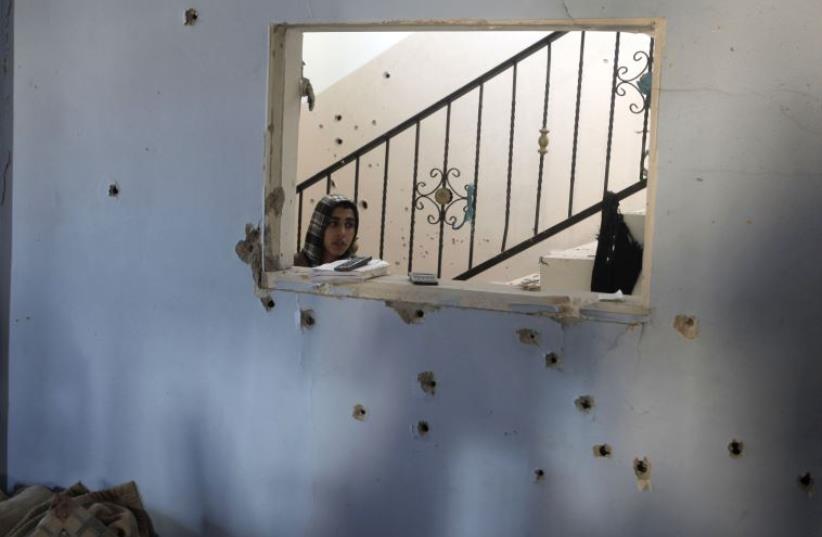 Bullet impacts are seen on a wall as a Palestinian man inspects a house where two members of the military wing of Hamas, the Ezzedine al-Qassam Brigades, and a civilian were killed on March 22, 2014 during an Israeli military operation in the northern West Bank of Jenin.
(photo credit: JAAFAR ASHTIYEH / AFP)
Advertisement
Three Palestinians were wounded, one of them seriously, in a gun battle that erupted in the Jenin refugee camp late Tuesday between Palestinian security officers and local gunmen.The armed clashes erupted after gunmen opened fire into the air during a rally in protest against visits by Jews to the Temple Mount, eyewitnesses said.Gen. Adnan Damiri, spokesman for the Palestinian Authority security forces, accused the gunmen of opening fire towards security officers who were in the vicinity.He said two officers were wounded.One of them, Emad al-Qassaem, was struck in the head with a bullet, he added.Wasfi Qabaha, a senior Hamas official in Jenin, said the gun battle erupted as a result of a “misunderstanding” between a number of youths and a security officer in plainclothes.Qabaha said several youths who were participating in the rally surrounded the security officer and seized his weapon after beating him.Palestinians security officers who rushed to the scene opened fire into the air in a bid to disperse the crowd, the eyewitnesses said. The youth hurled stones at the security officers, they said.Later, Palestinian security forces arrested 15 men from the refugee camp on suspicion of participating in the clashes. The forces also confiscated pistols and rifles that were found in the possession of the suspects.