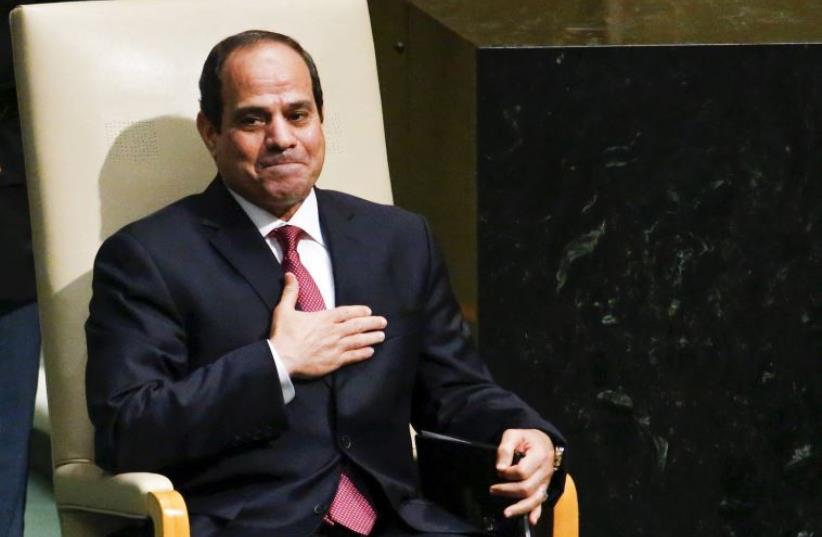 Egypt's President Abdel Fattah al-Sisi after addressing the 70th session of the UNGA, September 28, 2015.
(photo credit: REUTERS)
Advertisement
Egyptians view President Abdel Fattah al-Sisi’s speech this week calling for a new effort to reach an Israeli-Palestinian agreement as not such a big deal, a Cairo-based columnist for the Al-Arabiya News website told The Jerusalem Post on Thursday.“People who are against him are using it to show that he is against Islamic and Arab concerns, and those that support him say that the idea supports regional stability by seeking to resolve the Israeli-Palestinian conflict,” said Abdallah Schleifer, who also is a professor emeritus at the American University in Cairo.In other words, both sides are finding what they want in the speech, he said.Sisi said on Tuesday, “I ask that the Israeli leadership allow this speech to be broadcast in Israel one or two times, as this is a genuine opportunity... We are willing to make all efforts to help find a solution to this problem.”Egypt helped broker the cease-fire ending the 2014 Gaza war (Operation Protective Edge) between Israel and Hamas.Schleifer went on to say that with Islamic State running rampant in the region as well as other domestic and regional problems, Sisi feels this is the moment to introduce something positive.Asked whether Sisi is looking to draw attention away from domestic economic and terrorism crises, he responded that he does not see it that way since the initiative will be unable to make Egyptians forget other difficulties.As for the average guy on the street, the Cairo-based writer observed that he “probably doesn’t care that much, but is more concerned about food prices.”Mentioning an op-ed by MP Emad Gad in the Al-Masry al-Youm newspaper equating Sisi’s speech with that of president Anwar Sadat’s 1977 address to the Knesset in Jerusalem, Schleifer responded that it is “overstated, a way of praising the president.”Ramy Aziz, an Egyptian political analyst, opined that the initiative “will not achieve any tangible progress as some think, because Egypt as a nation is no longer influential on various Palestinian factions as it was before.”He noted that Foreign Minister Sameh Shoukry told the parliament’s Foreign Relations Committee earlier this month “that Egypt is not a leader in the region, and does not seek to achieve leadership.”Aziz continued, “This confirms that Egypt in this case can’t put any pressure on the various parties to accept a settlement. The initiative is an attempt to divert attention from the deteriorating domestic situation in order to present Egypt as a regional power again and to achieve some of political and economic gains.”He cited a reaction in an article in Al-Ahram by Moustafa Elsaeed which said that Sisi’s initiative comes under the guidance of Saudi Arabia, which seeks to set up an Arab-Israeli coalition, but is looking for some progress on the Palestinian issue so as to justify the alliance to Arabs. The article added that if the alliance would materialize, it would increase Israel’s “control” over the region.Samuel Tadros, an Egyptian expert and research fellow at the Hudson Institute’s Center for Religious Freedom, told the Post that Egyptians’ perceptions of Sisi’s speech have “fallen along the existing lines of the country’s divide.“Egypt is currently a deeply divided country with no common agreement among its people on the country’s past let alone on its future, so reactions have largely followed where one already stands on the map,” he said.Tadros went on to explain that both Islamists and revolutionaries “have viewed it as the latest proof of Sisi’s treason. Coming shortly after the handover of two islands to Saudi jurisdiction, the move will provide further ammunition for their attacks on Sisi.”On the other hand, he said, Sisi’s supporters will support anything he does.“This is a life and death struggle between them and the Islamists, and for his role in that, they are willing to accept anything he does even if they fail to understand it,” he added.“Given the amount of conspiracy theorizing that has taken over the country, many Sisi supporters are already analyzing his speech as some sort of secret genius move to destroy Israel.”Most Egyptians contacted by the Post for this article did not want to comment.Reuters contributed to this report.