Police apprehended the terrorist, a resident of the Palestinian territories, after a short chase. 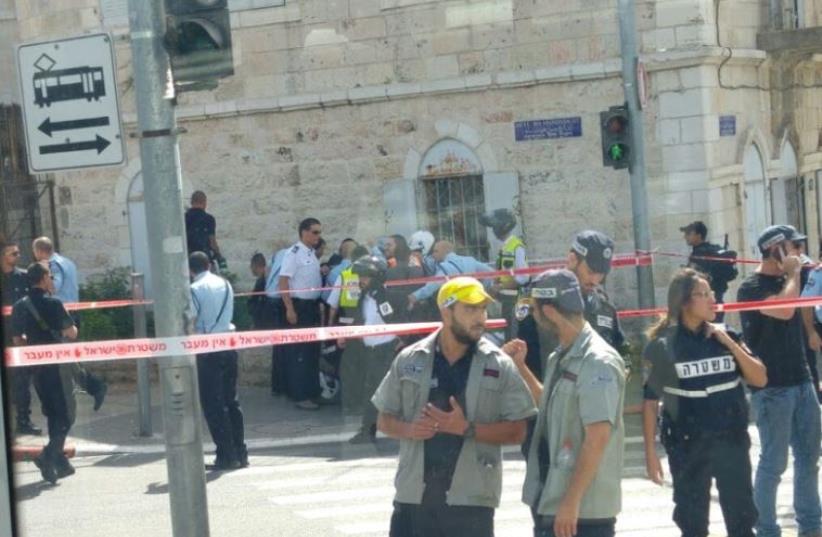 Scene of stabbing attack in Jerusalem
(photo credit: YONATAN COHEN)
Advertisement
A Palestinian man stabbed and slightly wounded a Jewish youth near the Old City’s Damascus Gate in east Jerusalem on Monday morning, before being overpowered and arrested by Border Police officers after a short pursuit on foot.According to Ch. Supt. Asi Aharoni, spokesperson for the Jerusalem Police District, a team of Border Police officers were on special patrol outside Damascus Gate at around 9:30 a.m. when they heard shouting coming from Hanevi’im Street nearby. The officers ran to the scene and saw a suspect who had just stabbed a Jewish man in the back and was fleeing toward Ben Shadad Street.Aharoni said the assailant tossed his knife to the ground as police closed in, but it was later retrieved.The attacker, described by police as a resident of the West Bank in his 20s, was taken for questioning by the special investigation branch of the Jerusalem Police, Aharoni said.The victim, described as a haredi youth, was slightly wounded. He was treated by paramedics at the scene before being taken to Sha’arei Zedek Medical Center for further treatment.The commander of the Kedem police subdistrict, Cmdr. Haim Shmueli, praised the arresting officers’ quick response, saying they prevented further harm to bystanders. He added that special deployments in the area will continue for the time being.Dovid Shekler, a United Hatzalah volunteer medic, treated the victim, who had been stabbed in his upper body, at the scene.“I continued to treat him until an emergency services ambulance arrived at the scene and evacuated him to Shaare Zedek hospital,” Shekler said. “He was fully conscious at the time of transport.”The attack followed an incident last week in which two elderly women were stabbed and moderately wounded by a Palestinian attacker in the city’s Armon Hanatziv neighborhood.Damascus Gate has been one of the principal flash points of the so-called stabbing intifada, which began last fall, and the site of repeated stabbing and shooting attacks. The first fatal stabbing took place on Hagai Street, inside the Old City just steps from Damascus Gate, on October 3, when Nehemia Lavi and Aharon Bennett were killed by a Palestinian teen.The site is a crossroads where Jews heading to the Western Wall and Arabs making their way to the Temple Mount cross paths. It is considered one of the most difficult places in the country to police.Taking the difficulties of providing security at the site into consideration, Jerusalem police have for several months deployed dozens of officers in and around the gate and throughout the nearby alleyways of the Old City.Jerusalem Post staff contributed to this report.