A number of alleged Jewish extremists have been arrested since the attack, including three placed under administrative detention, but neither the Shin Bet nor the Israel Police have said if any are suspected of being involved in the attack. 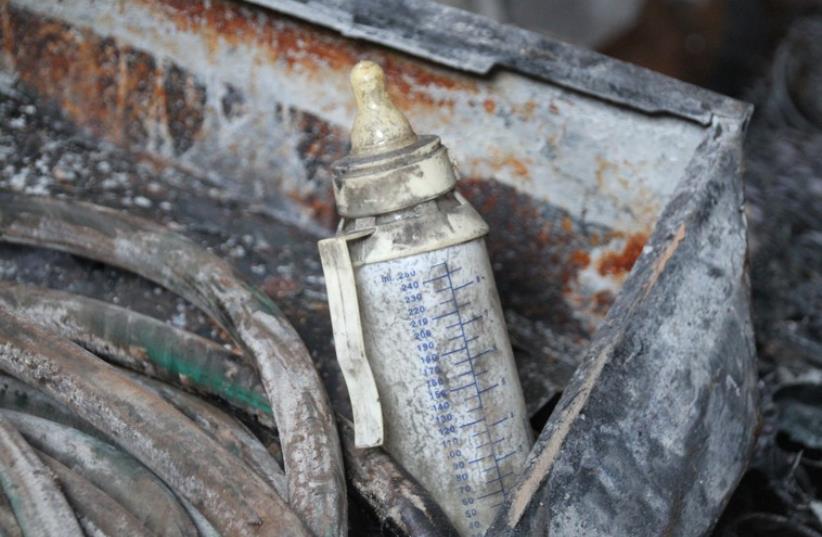 A burnt baby bottle found in the bedroom where the Dawabsha family slept when Israeli terrorists threw a molotov cocktail through the window
(photo credit: TOVAH LAZAROFF)
Advertisement
The Shin Bet and Israel Police investigation into the arson attack in Duma is still ongoing, both agencies said Monday morning, hours after Riham Dawabsha died of her wounds suffered as a result of the blaze in her West Bank family home on July 31.Due to a sweeping gag order on the investigation, neither agency would give any details about potential advancements in the case, but they said it has yet to reach its conclusion.A number of alleged Jewish extremists have been arrested since the attack, including three placed under administrative detention, but neither the Shin Bet (Israel Security Agency) nor the Israel Police have said if any are suspected of being involved in the attack.Israeli lawmakers conveyed their condolences to the Dawabsha family on Monday morning, but expressed amazement that the case had not been solved yet.“More than one month has passed and the murderers are walking free and the terrorism and the hate crimes against Palestinians continue and nothing has changed,” Joint List MK Aida Touma-Sliman said. “The policy of occupation gave rise to the killers of the Dawabsha family.”Zionist Union MK Zouheir Bahloul said that, “Thirty-nine days and three family members dead, and still not one arrest or even a lead about who is responsible for this inhumane and barbaric act.”“The Israeli security forces, who boast about their intelligence and investigative capabilities and their advanced weapons systems, cannot even bring a few small and miserable murderers to justice. This is infuriating but even more so, it is embarrassing,” he added.Zionist Union MK Omer Bar-Lev said that the arson has harmed the fabric of relations between Arabs and Jews in Israel.Bar-Lev said that Dawabsha is “another victim of the sick, messianic, barbaric cult that has taken over our country and that threatens to destroy us from the inside.”Israeli officials, meanwhile, pushed back against Palestinian charges that Israel was not doing enough to find the perpetrators.“Israel is determined to find those responsible and bring them to justice,” one official said, adding that Israel will “get to them,” just as it apprehended those who killed east Jerusalem teen Muhammad Abu Khdeir last summer, and those responsible for the arson at the Church of Loaves and Fishes on the shores of the Kinneret in June.The official said that Prime Minister Benjamin Netanyahu unequivocally condemned the Duma attack when it took place, designated it a terrorist act to make it easier for the law enforcement officials to operate, visited the family in hospital, and called PA President Mahmoud Abbas to express his outrage.By contrast, he said, “we have never seen the same unequivocal condemnations,” when Palestinians attack Jews. When was the last time, he asked, that a Palestinian leader visited or called a Jewish victim of Palestinian terrorism? “Before they try to score some cheap political points,” the official said, “the Palestinians need to look in the mirror.”