The man was reportedly stabbed by two terrorists while doing shopping outside a Palestinian village. 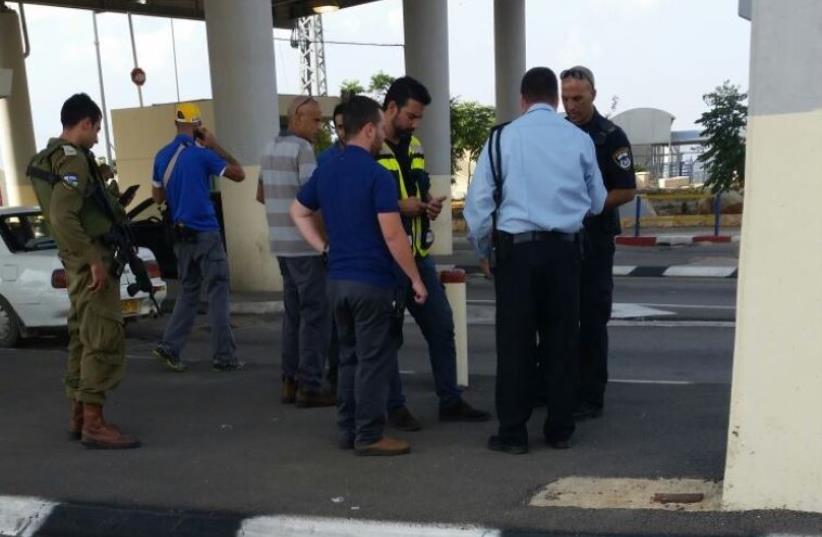 Eliyahu crossing in the West Bank, the checkpoint to which a man who was stabbed in his vehicle by a suspected terrorist fled on Sunday, November 8
(photo credit: MEDABRIM TIKSHORET)
Advertisement
A 48-year-old Israeli man is in serious condition after he was stabbed Sunday on Highway 55 outside the Palestinian village of Nabi Ilyas. After the attack, the victim, a resident of the settlement of Emmanuel, managed to drive himself to the Eliyahu checkpoint, swerving between the lanes as he drove, according to the Defense Ministry's report of the attack. Security personnel approached the vehicle and when the man opened his car door, he told security forces "I've been stabbed. I've been stabbed," before passing out. Security forces then provided emergency medical treatment to stop his bleeding. An initial investigation of the incident found that the man had stopped to do some shopping on the road outside Nabi Ilyas. At one of the shopping stands, two terrorists stabbed him in the stomach and fled. After driving himself to the checkpoint, the man was taken to Meir Medical Center in Kfar Saba for emergency treatment and is on a respirator.The terrorists who committed the attack are still at large and security forces are conducting searches in the area.
This is the third separate terror attack of the day. Around 11:00 AM, a civilian security guard shot a female Palestinian assailant who stabbed and lightly wounded him, as he stood at his post, just outside the Betar Illit settlement, which is located a short distance away from Jerusalem.Earlier, around 9 o'clock in the morning, Border Police shot and killed a terrorist who had rammed his car into a hitch-hiking post at the Tapuach junction. Five Israelis were injured in that attack, two seriously, one moderately and two lightly.