The statements of condemnation came promptly following the attack, and shared a common harsh tone against the act of terror inflicted upon Israelis by terrorists. 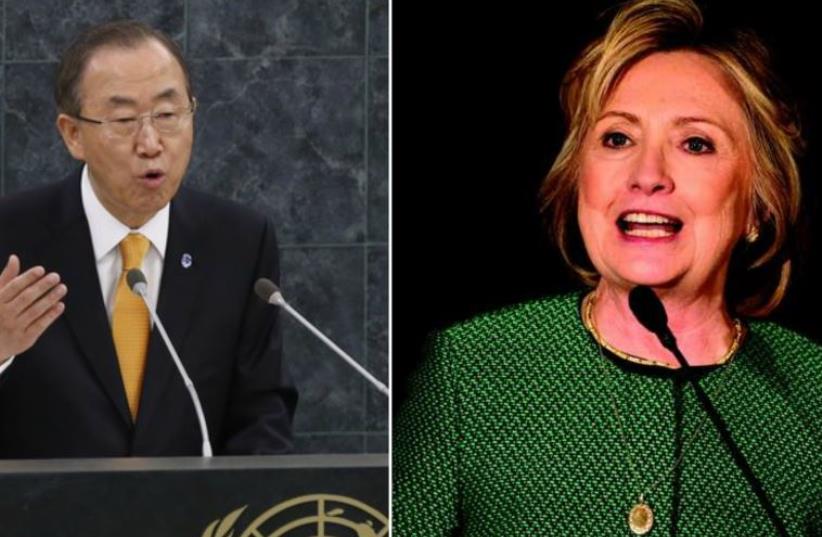 Hillary Rodham Clinton and Ban Ki-Moon
(photo credit: REUTERS)
Advertisement
WASHINGTON/NEW YORK - Both the United States and the United Nations strongly condemned the coordinated terrorist assault on Tel Aviv’s Sarona Market Wednesday evening, during which four people were killed and multiple others wounded.The statements of condemnation came promptly following the attack, and shared a common harsh tone against the act of terror inflicted upon Israelis by terrorists.The United States condemned the attack and referred to it as a "cowardly" and "horrific" act of terror.A statement issued by the State Department said that US officials are in touch with Israeli authorities to express "support and concern.""The United States condemns today’s horrific terrorist attack in Tel Aviv in the strongest possible terms," the statement reads. "We extend our deepest condolences to the families of those killed and our hopes for a quick recovery for those wounded. These cowardly attacks against innocent civilians can never be justified."Presumptive Democratic presidential nominee Hillary Rodham Clinton referred to Wednesdays events as a "heinous terrorist attack," reaffirming Israel's right to defend itself as authorities confirm that the perpetrators were Palestinian.“I condemn the heinous terrorist attack in Tel Aviv today," the candidate said in a prepared statement. "I send my deepest condolences to the families of those killed and I will continue to pray for the wounded."In a reference to comments from her campaign rival, Republican Donald J. Trump, who argues for a "neutral" approach to the Israeli-Palestinian conflict, Clinton added: "Israel’s security must remain non-negotiable."In past remarks, Clinton has questioned Trump's commitment to the US-Israel alliance."I stand in solidarity with the Israeli people in the face of these ongoing threats, and in unwavering support of the country’s right to defend itself," she said.The attack was further condemned by UN Secretary-General Ban Ki-Moon. He conveyed his condolences to the families of the victims and the Government of Israel and reiterated that there is no justification for terrorism "nor for the glorification of those who commit such heinous acts."The Secretary-General added he is "shocked that the leaders of Hamas have chosen to welcome this attack and some have chosen to celebrate it" and called upon the Palestinian leadership to "live up to their responsibility to stand firmly against violence and the incitement that fuels it."