"Perhaps if this policy of demolishing homes was implemented sooner, I wouldn’t have become a bereaved father," says father of Lt. Shir Hajaj, 22. 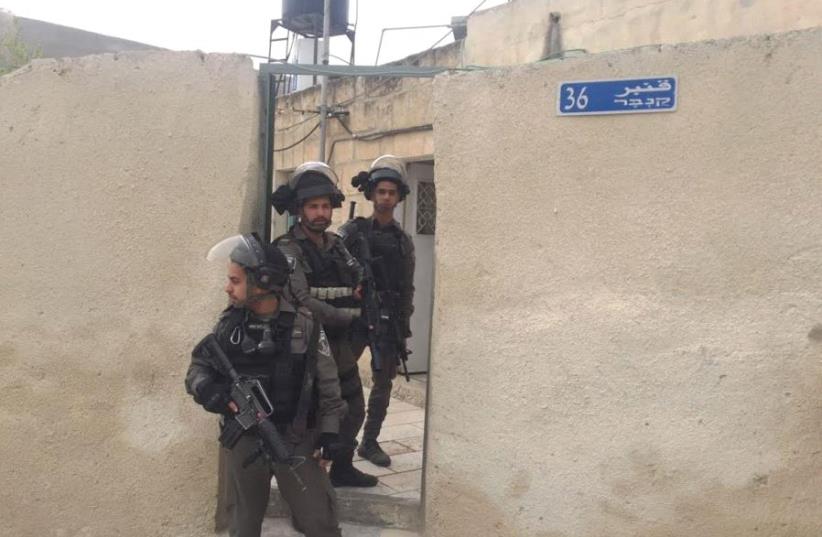 Police oversee the Wednesday morning home sealing
(photo credit: POLICE SPOKESPERSON'S UNIT)
Advertisement
Two months after mowing down 21 IDF soldiers in a Jerusalem truck-ramming attack, killing four who were trapped beneath its wheels, police on Wednesday sealed the east Jerusalem home of the terrorist responsible for the carnage.On January 8, Fadi al-Qanbar, 28, of Jabl Mukaber, drove a flat-bed truck into the unsuspecting soldiers as they were exiting a bus on the Armon Hanatziv promenade, killing Lt. Shir Hajaj, 22, of Ma’aleh Adumim; cadet Erez Orbach, 20, of Alon Shvut; cadet Shira Tzur, 20, of Haifa; and Lt. Yael Yekutiel, 20, of Givatayim.
Jerusalem Terror Attack: Footage of truck ramming into group of people in Armon Hanatziv, Jan. 8, 2017
Prior to carrying out the attack, the married father of four, reportedly posted multiple comments on his Facebook page praising ISIS.On Wednesday morning, Merav and Herzl Hajaj, whose daughter Shir Hajaj, was murdered, joined the cadre of heavily-armed police who cordoned off the area surrounding Qanbar’s two-floor residence to witness the concrete being poured to condemn the home.Jerusalem District Police Commander, Major-General Yoram Halevy, approved the Hajaj’s request to be present. Additionally, Halevy met privately with each of the deceased soldiers’ families to keep them updated on all police activity related to the investigation.While Herzl conceded that the operation did not assuage the pain of losing his daughter, he said he hoped it will nonetheless serve as a deterrent against future attacks. “It won’t bring Shir back, but it might stop future terrorists,” her father told Ynet. “I can’t say I’m happy, and I’m not really satisfied. Perhaps if this policy of demolishing homes was implemented sooner, I wouldn’t have become a bereaved father.”Still, Herzl commended the police for their support, as he and his wife mourn their loss.“I have to praise the Jerusalem Police and the district commander who really embraced us today and accompanied us throughout the entire process,” he said. “They took us to his home and explained to us how it will be sealed off, and supported us during the difficult moments.”To prevent potential disturbances, police temporarily detained the killer’s father and brother before the home was sealed.Days following the attack, the Interior Ministry initiated plans to revoke the residential status of 12 of Qanbar’s family members. Interior Minister Arye Deri said the move is intended to send a firm message to other potential terrorists who exploit receiving state benefits.“From now on, anyone who plots, plans or considers carrying out an attack will know that his family will pay a heavy price for his actions,” he said at the time.“This decision signals a new era against terrorism and terrorists who carry out terrible attacks against civilians. From now on, there will be no tolerance shown to anyone involved in attacks against Israel – including their relatives.”Indeed, Police spokesman Micky Rosenfeld said on Thursday that home demolitions of terrorists will continue to be enforced.“Police operations will continue sealing and demolishing homes if necessary, based on court orders, as part of ongoing coordination with the Jerusalem Municipality and other security organizations dealing with the terrorist attacks taking place,” said Rosenfeld.