Terrorist who rammed infant, 10 others in capital, affiliated with Hamas 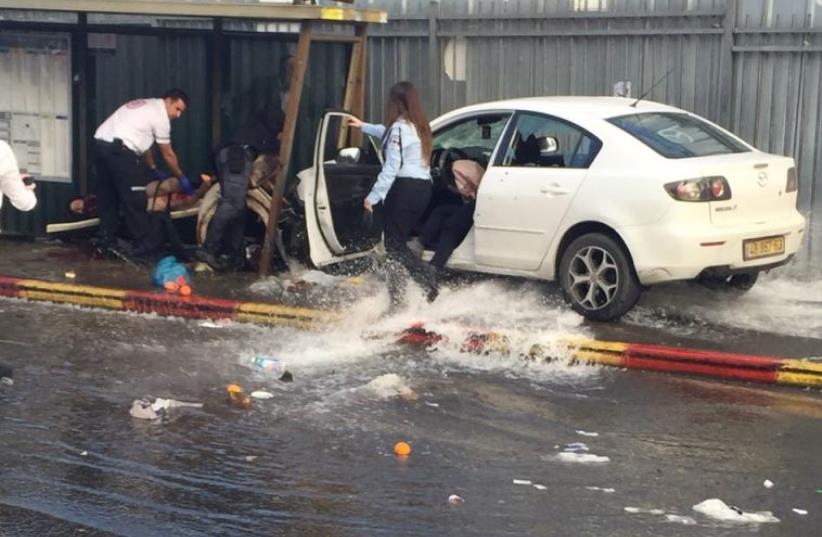 Scene of rammin attack at Chords Bridge in Jerusalem
(photo credit: ISRAEL BEN HEMO)
Advertisement
Less than 24 hours after a Palestinian man rammed his car into 11 pedestrians in Jerusalem, seriously wounding an infant boy, Hamas announced Tuesday that the assailant was a member of the terrorist organization and resided in the West Bank.Although police initially identified the terrorist, Abed el-Muhsen Hassuna, 21, as living in east Jerusalem’s upscale Arab Beit Hanina neighborhood, Hamas claimed that Hassuna, who held an Israeli identity card, had resided in Hebron for the past two years.A subsequent police investigation determined that Hassuna drove his car from Hebron to the western entrance of Jerusalem on Monday and at 3 p.m. he plowed the vehicle into a group of civilians waiting at a bus stop near the Central Bus Station, across from the Bridge of Strings.During the collision, which knocked over a fire hydrant, an 18-month-old boy sustained a serious leg wound, resulting in reported amputation, while 10 others were taken to area hospitals in satisfactory- to-good condition.Amid the chaotic, flooded crime scene, a security guard, police officer and armed civilian shot Hassuna dead as he attempted to exit the vehicle.A green, metal hand ax that was found by police near his corpse was seized as evidence.“Their quick and accurate action, which neutralized the terrorist, prevented a more serious attack,” said Jerusalem District Police Chief Asst.- Ch. Moshe Edri following the incident.Of the wounded, seven were rushed to Hadassah University Medical Center in Ein Kerem, while the remaining five victims were taken to the capital’s Shaare Zedek Medical Center.Hadassah officials and the infant’s family, religious immigrants from France, refused to confirm multiple media reports on Tuesday that the boy’s leg was amputated below the knee following two emergency surgeries.The toddler is the only victim still being held at Hadassah.Meanwhile, Shaare Zedek Medical Center reported on Tuesday that one woman is attached to a respirator and ventilator in the intensive care unit; a man in satisfactory condition underwent surgery and is being treated in the orthopedics department; a woman is in the ear-noseand- throat department; and two others are under observation in good condition.Following the attack, Prime Minister Benjamin Netanyahu issued a directive to fortify hundreds of bus stops in Jerusalem to protect them against vehicular assaults. The police and Transportation Ministry will determine the list of bus stops to receive special protection.Moreover, after an emergency security meeting with Transportation Minister Israel Katz Monday night, Jerusalem Mayor Nir Barkat presented Katz with a NIS 2 million plan to protect civilians at high-risk bus stops throughout the capital.“Katz welcomed the initiative and promised to work with the municipality and Finance Ministry to get the budget needed to put this plan into practice,” Barkat said, also thanking Netanyahu for his rapid response.By Tuesday, the prime minister approved the financing for hundreds of the concrete safety barriers.It remains unclear when and where they will be installed.Meanwhile, police said on Tuesday a female Border Police officer prevented a terrorist attack in downtown Jerusalem after detaining and searching a suspicious-looking Palestinian woman.The suspect was arrested after confessing that she intended to use a screwdriver that was found in her purse to carry out an attack on a heavily traveled nearby street.Police and security personnel remain on the highest level of alert across the city, with special emphasis on the Old City, flashpoint Arab neighborhoods and all public venues.Judy Siegel contributed to this report.