'The IDF has lost control over the Hebron area'

Members of the Knesset Foreign Affairs and Defense Committee were present at a parlor meeting of settlers and politicians on Thursday. 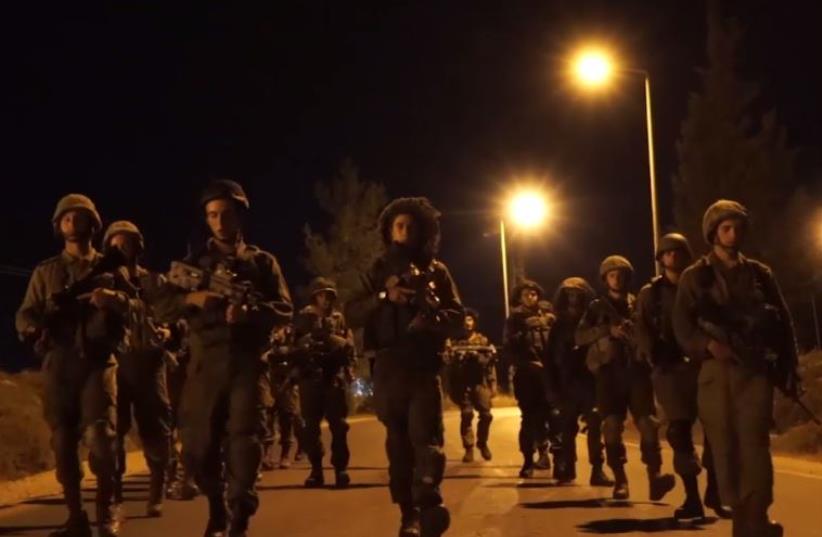 IDF raid in Hebron
(photo credit: screenshot)
Advertisement
The IDF has relinquished control over portions of Area C around the Hebron area, Kiryat Arba Council head Malachi Levinger told politicians at a parlor meeting between politicians and settlers on Thursday afternoon.“Something has to change,” Levinger said as he sat in the living room of South Hebron Hills Regional Council head Yochai Damri in the Otniel settlement.Along with several dozen area settlers, Levinger spoke with members of the Knesset Foreign Affairs and Defense Committee, who came to the area in the aftermath of two terrorist attacks that claimed the lives of Hallel Ariel, 13, and Rabbi Michael Mark, 47.Ariel was stabbed to death on June 30 by a Palestinian teenager who broke into her bedroom and Mark was killed on July 1 by Palestinian gunmen on Route 60, outside Otniel. In January a Palestinian teenager infiltrated the Otniel settlement and killed a mother of six, Dafna Meir, in her home.Levinger told the politicians that on the way on the meeting he had thought of the dozens of attacks that had occurred in the Kiryat Arba, Hebron and South Hebron Hills area since the wave of Palestinian violence against Israelis began in mid-September.“The IDF has lost control over this area,” said Levinger, who urged the FADC to help restore security to the region.There is an Arab population in this area that wants to live together with the Israelis here and the two groups are in contact with each other, Levinger said.A number of those who spoke explained that they want to live in peace with their Palestinian neighbors. They mentioned with gratitude the fact that a Palestinian doctor from a nearby village was among the first responders to the terrorist attack in which Mark was killed.The Palestinian doctor helped rescue Mark’s wife, Chava, and two of his children Tehila, 15, and Pedia, 15.
Terror victim"s daughter addresses Knesset members (Video: Jack Brook)
But Levinger and others said there are other Palestinians who engage in violence and they must be exiled and or treated harshly to prevent further attacks. The settlers also proposed simpler solutions, such as better lighting on roads, better cellular coverage and improved security.MK Amir Ohana said that those who use the mosques as a pulpit from which to incite Palestinians to kill Jews must be stooped. The demolition of terrorist homes must be speeded up, he added.Mark’s daughter Shira said it scares her that she does not know “who is with us and who is against us. Those who are with us, should be greeted with us. But to the others we have to do something drastic.“I lost my father and I want to scream enough already. But it seems to me that you are the ones who should be screaming and doing something,” she said. “The South Hebron Hills needs you.”Mark’s brother-in-law Rabbi Beni Kalmanzon said his vehicle has been attacked more than 19 times over the past years as he drove home to Otniel.Damri said that over the last 22 years, Palestinian terrorist have killed 25 people on a 16-kilometer stretch of Route 60 near Otniel.At the meeting, a doctor from Otniel, David Schler, said he wears a flak jacket when he drives on Route 60 and of late has also begun carrying a gun.“It could be that we would have to leave rather than become another headline in the newspaper,” he said.Resident Sigal Shiloh said, “We cannot continue to endure one terrorist attack after the other.” Vigilance on the part of area residents is not enough, he said.Meir was known for locking her door, but she was killed in that one moment when it was open, Shiloh said.“I want to drive on the road without being afraid,” Shiloh said. “I am certain that you have the answers.”