‘This Intifada is worse than the last’

New survey finds that the majority of those asked said that they felt “the security situation is more serious today compared to the Second Intifada.” 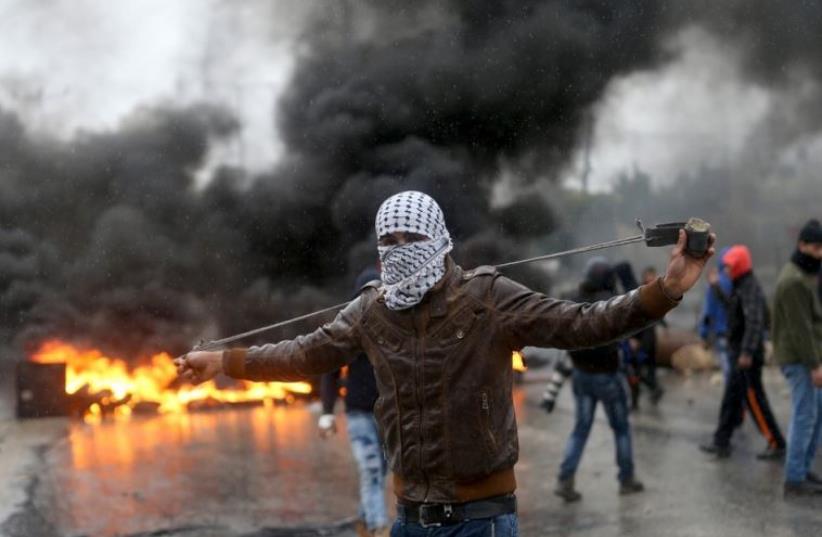 A Palestinian protester prepares his sling to hurl stones towards Israeli troops during clashes near Jenin
(photo credit: REUTERS)
Advertisement
Six months into a wave of stabbings, shootings and car ramming attacks by Palestinians against Israelis, the strain is showing. A survey conducted by the Smith Polling Institute found that the majority of those asked said that they felt “the security situation is more serious today compared to the Second Intifada.” Since mid-September, 34 Israelis have been killed in attacks by Palestinians. In this time period there have been 211 stabbings, 83 shootings and 42 vehicular attacks, according to information on the Foreign Ministry's website. Approximately 200 Palestinians were killed by Israelis over the same period, 130 of whom were said by Israel to have been conducting an attack at the time of their death. The remaining 70 people died in clashes with Israeli security forces or with Jewish residents living in the West Bank.The Second Intifada (Palestinian uprising) lasted from 2000 to 2005 and was responsible for the deaths of an estimated 3,000 Palestinians and 1,000 Israelis. Suicide bombings were a frequent occurrence in those years. Opinion differs as to whether the recent increase in violence in Israel and the Palestinian Territories amounts to a full intifada or not.“An indifferent reaction cannot be expected from the Israeli public when the level of risk to the citizens has increased significantly,” Pini Schiff, CEO of the National Association of Security Companies, said in a statement released with the findings of the polling. Statistics from the survey were released in anticipation of the Israel Security Conference taking place on April 12 which will bring together elements from the Israeli private security sector and official institutions such as the police, intelligence agencies and the Ministry of the Interior. Of the 500 adult Israelis polled, 51% said that they found security worse now than in the early 2000s. A further 53% said they felt their personal security had diminished in the last two or three years.“Now it’s the Third Intifada and it is the worst one (of the three),” Galit, a shop worker selling bags and accessories on Jaffa Road, Jerusalem’s main commercial street, told The Media Line. The frequency and the random nature of the current ‘lone wolf’ attacks are what makes them so scary, she suggested. “With the (suicide) bombings it was one at a time - one every two, three four months. The stabbings happen every day.”Not everyone agrees. While acknowledging that attacks are occurring more frequently today, Dan Levi, a young Israeli working at the Jerusalem Hostel, said that the lethal nature of the bombings fifteen years ago contributed to a greater feeling of insecurity. “The Second Intifada was serious. I was a teenager and I knew people who died. Buses were exploding, it was really scary,” he told The Media Line.As a result of the current violence, 56% of those asked said that they “refrained from travelling on public transportation and/or entering crowded public places.” During the Second Intifada it became common for Israelis to avoid eating in restaurants or traveling on buses, both of which were viewed as easy targets for suicide bombers. Samuel, a young religious Israeli who immigrated to the country from America four years ago, told The Media Line he felt his security was no better or worse than it was when he first arrived, though he conceded he had changed his behavior because of the recent attacks. “I don’t walk through the Muslim quarter (of the Old City) anymore on my way to the Kotel (Western Wall). It’s quicker, it saves me about ten minutes, but I walk the roundabout way through Jaffa Gate now,” he said. This he does on account of the recent spate of stabbings which Samuel described as the main danger today. A year ago car rammings and attacks on public transport were the greater threat so he avoided standing at bus stops or traveling on the train, he explained. At the upcoming security conference the role of security guards and armed civilians as a counter-weight to the unpredictable phenomenon of ‘lone wolf’ attacks will be discussed. “If you look at what’s happened in the last six, seven months, most of these terror attacks were stopped by (armed) civilians,” Iran Gil, CEO of the security firm HSMT, told The Media Line. A question on the agenda is how much responsibility for security the state should relinquish to civilians. There is a balancing act required between allowing civilians, who may have limited training, to be armed, and protecting people from ongoing attacks, Gil said. In the meantime the role of security guards is emerging as an important, and often first, line of defense.“Just yesterday (parliament) passed a law that security personnel should go home with their weapons (at the end of a work shift). This means an extra 50,000 weapons (will be) on the streets every day,” the CEO said.This might be a comfort to the 69% of Israelis polled who said they felt “that a civilian carrying a weapon in a public place largely contributes to a sense of personal security.”