Border Police officers stand guard at the scene of the terror attack in Har Adar
(photo credit: AMMAR AWAD / REUTERS)
Advertisement
Soldiers patrolled the seam-line area of the Har Adar settlement Tuesday night after a 7:14 a.m. terrorist attack at its back gate claimed the lives of three Israelis and wounded one other.According to Border Police, the Palestinian assailant approached the town's gate posing as a laborer. When the officers manning the gate grew suspicious of him because of his unusual clothing, he pulled out his weapon and opened fire.After an exchange of gunfire, the assailant was shot dead, but not before fatally injuring three people and severely wounding another.It was the first terrorist attack in the 31-year history of the settlement that abuts the Green Line just outside Jerusalem.
Israeli Border Policeman speaks out about killing the Har Adar terrorist, September 26, 2017. (Israeli Police
The victims – Border Police officer Solomon Gavriya, 20, of Be’er Ya’acov, and security guards Youssef Othman, 24, of Abu Gosh, and Or Arish, 25, of Har Adar – were buried in cemeteries in their hometowns late in the afternoon.Israeli media identified the attacker as 37-year-old Nimer Mahmoud Ahmad Jamal, a father of four from the West Bank village of Beit Surik. The man is said to have had a valid work permit allowing him to enter Jewish settlements in the West Bank. Israel Defense Forces closed Beit Surik and the nearby village of Biddu after the attack. Residents can enter the villages but can only leave for humanitarian reasons.Troops also raided Jamal’s home and arrested three Palestinians, including two of his brothers, on suspicion of involvement in the attack.Following the closure of Beit Surik, some 15 Palestinians rioted against the IDF in Biddu.A general closure of the West Bank has not been imposed and Palestinians with work permits can still enter Israel, an IDF spokesman said.
Har Adar resident speaks about terror attack (Tovah Lazaroff)
The attack took place at the back end of the settlement, called the Biddu gate, because it borders the Palestinian village of that name. Some 200 Palestinian laborers cross daily through the gate and into Har Adar, as did Jamal, who had a work permit for communities in Judea and Samaria.It is not currently known if the assailant belonged to a terrorist organization, but Hamas has praised the attack and called for others to carry out similar ones.  Jamal was well-known and trusted in Har Adar, where he worked privately for a number of families.Early Tuesday morning, Jamal hid a gun under his jacket and headed to the gate, as he normally did.But the jacket, an unusual item in the September heat, aroused the suspicion of the security officers who called him over for a special inspection.Jamal “pulled out a pistol he had in his possession, and fired at close range at the security guards and the [Border Police] officer,” police said.
Housing Minister Yoav Galant speaks at the scene of the Har Adar terror attack (Tovah Lazaroff)
The two security guards and the Border Police officer were immediately killed. Other officers at the scene shot and killed Jamal. Har Adar’s security team head, Amit Steinhart, was wounded, but was able to call Har Adar council head Chen Filipovitz and urge him to rush to the scene.“He asked me to look out for his wife if he died,” Filipovitz said.The council head replied: “Don’t be ridiculous, you are not dying.”Filipevitz arrived in minutes and helped cover the bodies.He recalled how the night before, Othman had stayed late in the council offices to help fix the television. In the council offices workers fielded calls all day, telling people of Steinhart’s recovery and the tragic fate of the three slain victims.Palestinian workers were asked to leave by noon and will not be allowed into the settlement on Wednesday, save for a few necessary exceptions.Har Adar Resident Drora Bardizchev, who had employed Jamal in her home, said in an interview to Channel 10 News that she was shocked by the attack. She said she had enjoyed a very good relationship with him, often spending time alone with him in the house and drinking coffee together during breaks. She said the man, whom she referred to as Nimer, had been under stress in recent months due to a domestic dispute with his estranged wife. The Israeli Security Agency (Shin Bet) issued a statement saying Jamal had significant personal and family problems, including a history of domestic violence. The statement added that his wife had fled to Jordan several weeks ago, leaving him to care for their four children.The IDF Spokespersons Unit released a Facebook post that Jamal had written to his wife, in which he stated that his actions were unrelated to their relationship. In the post, which was published on Facebook on Monday, he wrote that he was to blame for their poor relationship due to jealousy and stupidity and that she should care and educate their children according to the teachings of God.
The gun used in the terror attack in Har Adar. (COURTESY ISRAELI POLICE)
The injured Israeli, the town's security chief, was rushed to hospital for treatment.The attacker's home village, located about a kilometer away from Har Adar, has been placed under a military closure. 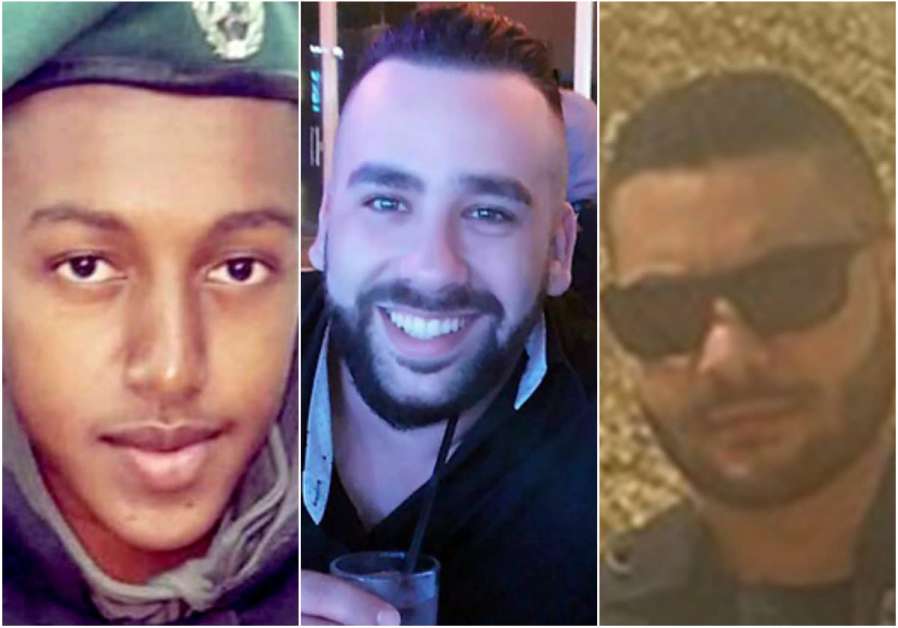 St. Sgt. Solomon Gabaria, Yossef Otman and Or Arish, the victims of the Har Adar West Bank terror shooting, September 26, 2017. (Courtesy Israel Police)
One of the victims murdered was identified as border police officer First Sergeant Salomon Gabaria (20) from Be'er Yaakov. Yossef Otman, from Abu Gosh, and Or Arish (25) from Har Adar were identified as the slain security guards.Israel's police superintendent Roni Alsheich said the actions of the security officers prevented a far more serious outcome. Magen David Adom (MDA) ambulance teams that arrived first at the scene pronounced the three victims dead. MDA paramedic Zohar Lomar described the efforts to save the fourth person shot in the attack: "I went to treat him, he was suffering from gunshot wounds in the stomach and chest. We transferred him to the ambulance and evacuated him to hospital, all the time continuing lifesaving treatment... On the way he spoke to us and told us about what had occurred."Moshir Abu Katish, a Muslim volunteer EMT with United Hatzalah, was also one of the first responders on the scene. He lives in the neighboring Arab-Israeli town of Abu Gosh."I raced over to the scene, which took place near the fence of Har Adar. Security forces had shot and killed the terrorist who had carried out a shooting attack against a group of Israelis," Abu Katish said. "I ran to treat the injured people who were suffering from gunshot wounds to their upper bodies. Unfortunately, the three more seriously injured people in the attack were pronounced dead at the scene. We treated a fourth person who was injured at the scene before he was transported to the hospital for further treatment and observation." Dov Baksht, the commander of  ZAKA rescue and recovery organization, who was at the scene of the terror attack, said, “This is a very difficult attack -  a terrorist opened fire at close range on four Israelis. The outcome is very bad, with three Israelis killed and the body of the terrorist. The ZAKA team at the scene has three ambulances to evacuate the murdered victims and ZAKA volunteers are working to collect the remains.” Baksht added, “The forensics teams from the Israel Police are currently working on the scene. We are waiting until they have completed their work and then we will enter the scene once again to complete our sacred work.”On Tuesday evening, Israeli security forces arrested two of the assailant's brothers in connection with the attack, The IDF Spokesperson's unit reported. The brothers were taken in for questioning.
A general view of the scene of the terror attack in Har. (AMMAR AWAD / REUTERS)
Defense Minister Avigdor Liberman condemned the attack and vowed to hunt down the terrorists and those who sent them out to kill Israelis. Liberman stressed that there is no difference between Palestinian-fueled terror and fundamentalist Islamic terror in Europe. He added that before there could even be talk of negotiations, the world must demand that the Palestinian Authority cease its inciting ways.Israeli President Reuven Rivlin responded to the attack, saying the nation's hearts were with the families of the victims. "The brutal terror attack exposes, once again, the daily reality that Israeli security forces, who are on the front lines, have to deal with," said Rivlin. "We will continue to confront terror and put our hands on the attackers and their backers."Internal Security Minister Gilad Erdan said there were no prior indications about the assailant's deadly motivations. He placed responsibility for the attack at the feet of the Palestinian Authority, which, he said, encourages terror with its policy of handing out stipends to terrorists and their family members.Deputy Foreign Minister Tzipi Hotovely called the attack "The Palestinians' welcome greeting to American envoy Jason Greenblatt." She said the Americans must focus all their attention on ending the murderous Palestinian terror efforts and that any negotiations with them are futile as long as they continue to incite to terror.Zionist Union Chairman Avi Gabbay called on the government to act "with an iron fist" against terrorists whose sole purpose is to harm Jews. "Har Adar is a community that for years exemplified coexistence between Jews and Arabs. This attack is a severe blow to the relations between the two communities," said Gabbay.Joint List MK Yousef Jabarin blamed the policy of the Israeli government for the attack. "The far right Israeli government is responsible for the bloody circle of violence and the conflict's enshrinement," he said. "There is no such thing as an enlightened occupation. There is no occupation without resistance."In July, three Jewish family members were killed when a Palestinian terrorist entered the West Bank Settlement of Halamish and stabbed them while they were sitting down for Shabbat dinner. The terrorist in that incident was incapacitated by a neighbor, a soldier who was home on leave.Gill Hoffman contributed to this report.