Bus sustained broken window and continued on to nearby Kiryat Arba, where it then stopped. 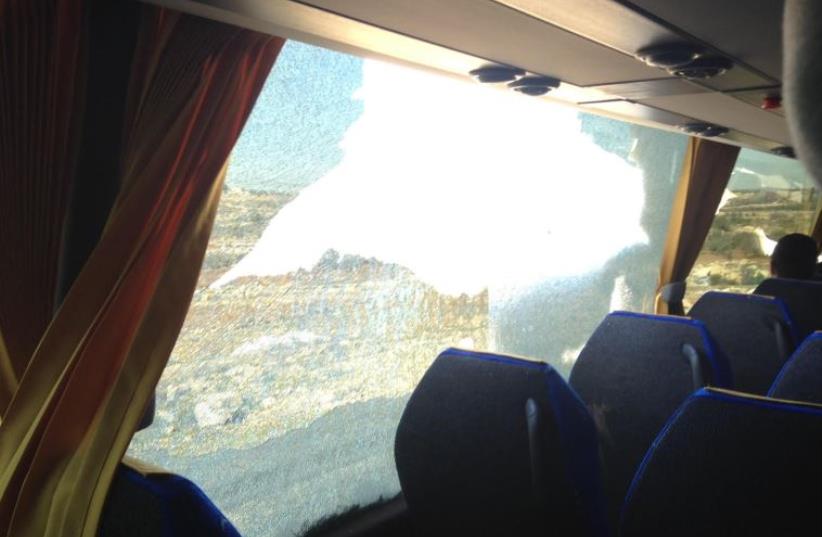 Bus carrying students on a Breaking the Silence tour hit by rocks near Hebron in the West Bank, December 25, 2015
(photo credit: UDI SHAHAM)
Advertisement
Three people were lightly wounded near Hebron on Friday when assailants threw rocks at a bus carrying students from Jerusalem’s Hebrew University on a tour in the West Bank hosted by the left-wing NGO Breaking the Silence.The bus sustained a broken window and continued onto nearby Kiryat Arba.Breaking the Silence collects testimony from former IDF soldiers, many of whom claim that Israel committed war crimes.The group has long been controversial for its questionable methodology, frequently unsubstantiated, unverifiable and anonymous allegations, and its practice of airing its claims abroad instead of bringing them to the Israeli legal system.Breaking the Silence describes itself on its website as “an organization of veteran combatants who have served in the Israeli military since the start of the second intifada and have taken it upon themselves to expose the Israeli public to the reality of everyday life in the occupied territories. We endeavor to stimulate public debate about the price paid for a reality in which young soldiers face a civilian population on a daily basis, and are engaged in the control of that population’s everyday life.”On Sunday, Yesh Atid chairman Yair Lapid and a group of military reservists came out against the NGO, saying that it defames IDF soldiers abroad.In the last three weeks, since President Reuven Rivlin spoke at a conference in which a Breaking the Silence representative participated in a separate panel discussion, politicians, including Prime Minister Benjamin Netanyahu, as well as the NGO Im Tirtzu, have been especially vocal in their criticism.Two weeks ago, Defense Minister Moshe Ya’alon and Education Minister Naftali Bennett banned the IDF and schools, respectively, from cooperating with Breaking the Silence.Lahav Harkov contributed to this report.