After a career as Israel's chief adversary at the negotiating table, Erekat may now rely on Israel for life-saving treatment.

Chief Palestinian negotiator Saeb Erekat speaks during a news conference in the West Bank city of Ramallah January 2, 2012.
(photo credit: REUTERS)
Advertisement
Chief Palestinian negotiator Saeb Erekat is suffering from a serious respiratory disease and is on the waiting list for a lung transplant in Israel or the United States, the Ynet website reported on Tuesday.Erekat, who is also secretary- general of the Palestinian Liberation Organization and one of the most recognizable Palestinian public figures, is reported to be suffering from pulmonary fibrosis and has been informed that a transplant will markedly increase his chances of survival.After a career as Israel’s chief adversary at the negotiating table, Erekat may now rely on Israel for life-saving treatment. 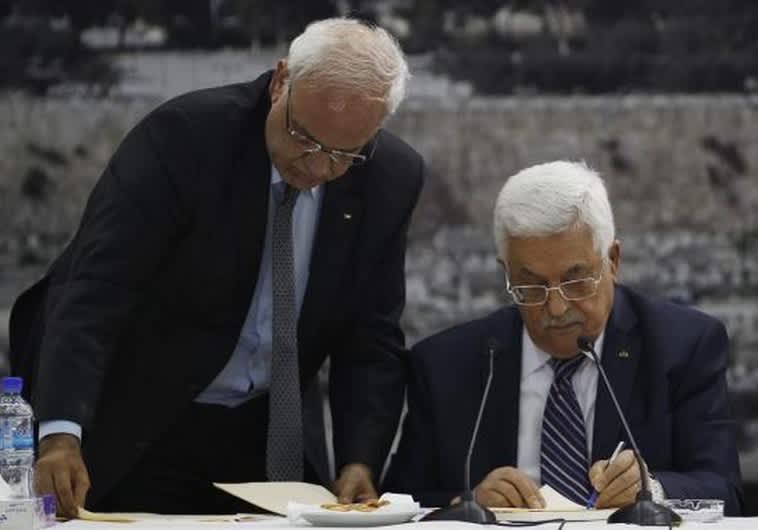 Palestinian Authority President Mahmoud Abbas (R) and his chief peace negotiator, Saeb Erekat, in Ramallah (Reuters)
Pulmonary fibrosis is a form of lung disease that can result in lung scarring. As the lung tissue becomes scarred, the sufferer will find it increasingly difficult to breathe. In most cases, there is no known cause for the disease.Given his declining health, Erekat is said to have greatly reduced his public duties and sometimes requires oxygen to assist his breathing, Ynet reported.Erekat, one of the architects of the Oslo Accords, will be temporarily replaced by the head of the Palestinian intelligence service, Majid Faraj.Faraj is one of the Palestinian Authority’s top officials and has taken on an increasingly important role in Palestinian diplomacy in recent times. In July, Faraj joined Erekat in meetings with US Middle East envoy Jason Greenblatt and US Ambassador to Israel David Friedman in Jerusalem.Reports that 62-year-old Erekat’s health is in decline comes at the same time as Palestinian Authority President Mahmoud Abbas’s medical condition is also in question after spending a number of hours at a Ramallah hospital on Saturday.Palestinian news agency Wafa reported that Abbas was discharged from hospital after undergoing “routine medical checks.”Palestinian sources told The Jerusalem Post’s sister newspaper Maariv that “82-year-old Mahmoud Abbas was suffering from exhaustion.”