UN Secretary-General Antonio Guterres did not mince words in his critique of Israel as it marks fifty years since it reunified Jerusalem in the Six Day War. 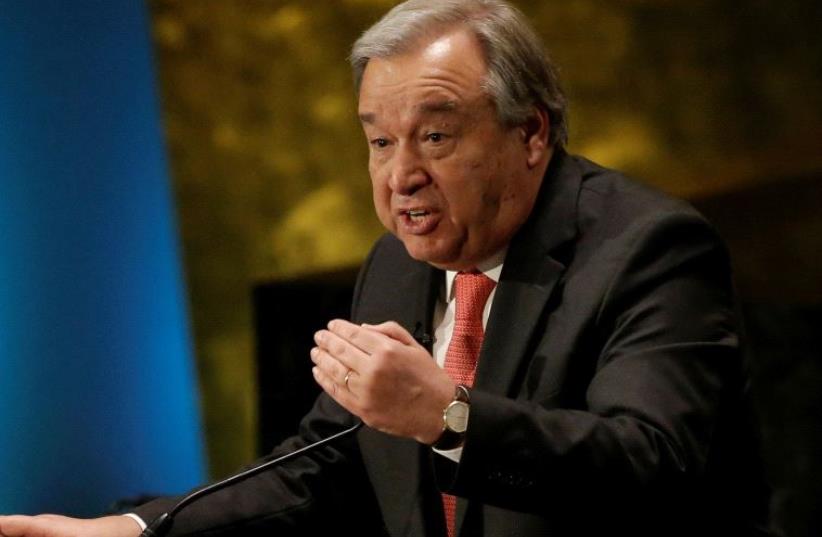 Antonio Guterres
(photo credit: REUTERS)
Advertisement
NEW YORK- UN Secretary-General Antonio Guterres said that the five-decades-long Israeli occupation has imposed a "heavy humanitarian and development burden on the Palestinian people" and "fueled recurring cycles of violence and retribution." The UN chief expressed his concerns regarding the prospects for regional peace in the Middle East in a statement released Monday, as Israel marks 50 years since it won the Six Day War in which it reunited Jerusalem.   According to Guterres, the perpetuation of the occupation is also sending “an unmistakable message to generations of Palestinians that their dream of statehood is destined to remain just that, a dream; and to Israelis that their desire for peace, security and regional recognition remains unattainable.” Ending the Israeli "occupation" of the West Bank and east Jerusalem, and achieving a negotiated two-state outcome, is the only way to lay the foundations for enduring peace, the secretary-general stressed.
UN official resigns over report dubbing Israel ‘apartheid regime’ (Reuters)
“It’s the only way to achieve the inalienable rights of the Palestinian people,” he added. “Generation after generation of Palestinians who have been compelled to grow-up and live in ever more crowded refugee camps, many in abject poverty, and with little or no prospect of a better life for their children.”“Now is not the time to give up on this goal,” he said. “Now is the time to return to direct negotiations to resolve all final status issues on the basis of relevant UN resolutions, agreements and international law.” “Continued settlement construction and expansion; violence and incitement; and the illicit arms build-up and militant activity in Gaza risk creating a one-state reality that is incompatible with realizing the legitimate national and historic aspirations of both peoples,” Guterres added. The secretary-general also said he believes that resolving the Israeli-Palestinian conflict will “remove a driver of violent extremism and terrorism in the Middle East and open the doors to cooperation, security, prosperity and human rights for all.”In response to the secretary-general's comments, Israel’s Ambassador to the UN Danny Danon said, “The attacks on Israel by our neighbors did not begin in 1967 and any attempt at a moral equivalency between killing innocent people and the building of homes is absurd.  Instead of spreading Palestinian misinformation, it would be best if the UN stuck with the facts."It is preposterous to blame terror and violence in the Middle East on the one true democracy in the region.  "The moment the Palestinian leadership abandons terror, ceases to incite against our people and finally returns to direct negotiations, then real progress can be made towards peace."