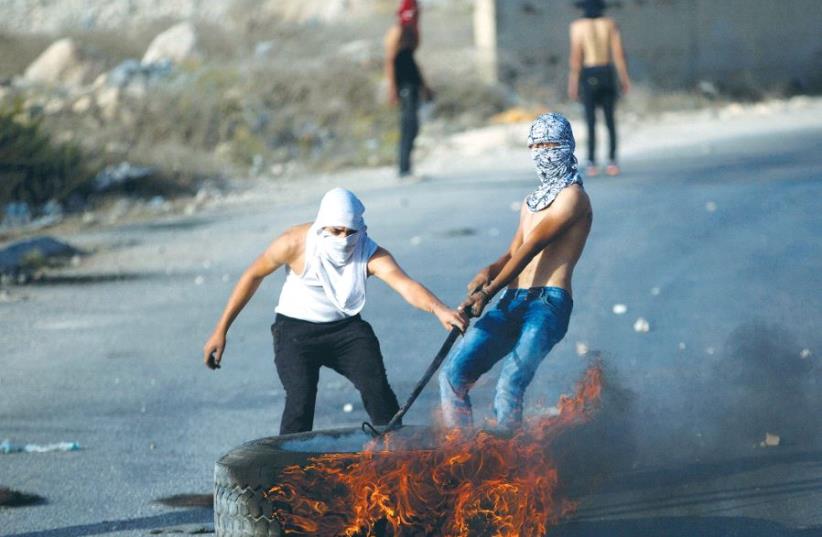 PALESTINIAN PROTESTERS drag a burning tire during a protest in a-Ram, northeast of Jerusalem.
(photo credit: MOHAMAD TOROKMAN/REUTERS)
Advertisement
Palestinian fatalities from violence related to the conflict with Israel dropped by 37%, according to the UN Office for the Coordination of Humanitarian Affairs.Also, the number of Israelis killed went down by 48%, OCHA said in its 10-page annual report called “Fragmented Lives: Humanitarian Overview 2016.”While it provided some data on Israelis, the report primarily focused on humanitarian issues facing Palestinians in east Jerusalem, the West Bank and Gaza.The “occupation” was the main cause for Palestinian suffering, the report charged.“At its heart, the crisis in the oPt [occupied Palestinian territories] is one of a lack of protection for Palestinian civilians – from violence, from displacement, from restrictions on access to services and livelihoods, and from other rights violations – with a disproportionate impact on the most vulnerable, children in particular,” said David Carden, who heads OCHA oPt.“While the trends vary from one year to the next, the pervasive lack of protection and accountability for violations of international law remains,” he added.OCHA said the “internal Palestinian political divide is also a serious contributing factor.”According to the report, 107 Palestinians were killed in conflict- related violence in 2016, compared to 169 the previous year.
UN official resigns over report dubbing Israel ‘apartheid regime’ (Reuters)
Eighty of the 107 deaths “were perpetrators or alleged perpetrators of attacks or attempted attacks against Israelis,” OCHA said. Nineteen were killed in demonstrations and clashes.Eight were killed in Gaza, it added.The highest number of fatalities, 36, occurred in Hebron, followed by 26 in Jerusalem.Palestinian injuries also dropped by almost 80% to 3,247 in 2016 from 15,477 in 2015. The majority were during clashes, demonstrations and search and arrest operations in the West Bank and east Jerusalem, the report said.It added that 1,900 of the injures were from tear gas, 616 from rubber- or sponge-coated bullets and 437 from live ammunition. The highest number of injuries, 746 occurred in the Jerusalem area, followed by 659 in Bethlehem and the Gush Etzion region.Another 363 Palestinians were injured in the Ramallah area and 341 in Hebron.With respect to Israeli casualties, 9 civilians and 4 soldiers were killed by Palestinians in 2016, compared to 25 Israelis killed the previous year.Out of the 2016 fatalities, eight were in the West Bank and 5 within sovereign Israel.Four of the 2016 fatalities were women, the report said.In addition 210 Israelis were wounded by Palestinians in 2016, compared with 304 the previous year.“The number of settler violence incidents resulting in Palestinian injuries or damage to property declined in 2016 for the third consecutive year,” the report said. It credited preventative measures by Israeli security services for the decline.