Kayed, a member of the PFLP, was arrested in 2002 and placed on administrative detention in June after serving a sentence of more than 14 years. 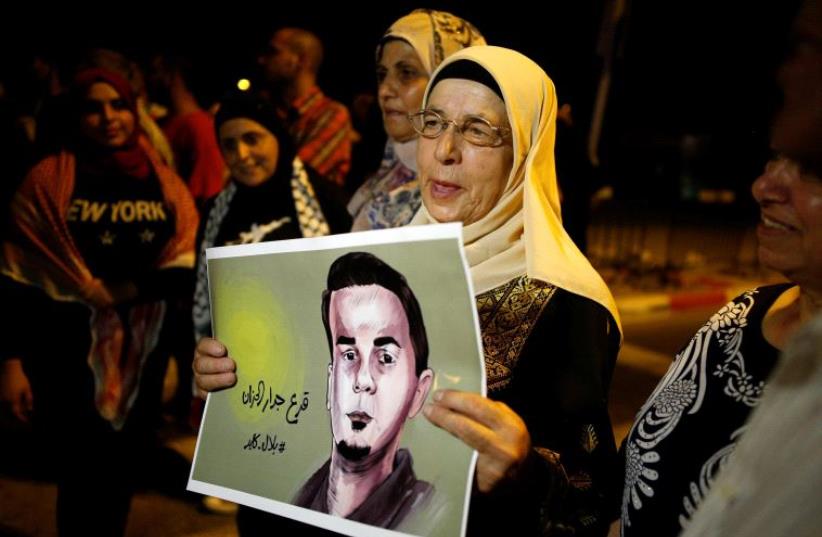 The mother of the hunger-striking Palestinian prisoner Bilal Kayed holds his picture during a protest in favour of his release, at Barzilai Hospital in the southern Israeli city of Ashkelon August 9, 2016
(photo credit: REUTERS)
Advertisement
A UN official has denounced Israel’s holding of a Palestinian terrorist who is in the 67th day of a hunger strike while in administrative detention as “egregious.”“I am deeply concerned about the deteriorating health of Palestinian detainee Bilal Kayed, after 67 days of a hunger strike protesting his detention without charge or trial,” Robert Piper, the UN’s resident coordinator and humanitarian coordinator for the occupied Palestinian territory, said in a statement on Saturday.Kayed was arrested in 2002 and sentenced to 14 and a half years in prison for crimes related to his affiliation with the Popular Front for the Liberation of Palestine. Immediately upon his nominal release on June 15, he was placed in administrative detention.This is a part of a recent trend of a few other cases of Palestinian terrorists who served their prison terms, were due to be released, but were instead shifted to administrative detention.The Foreign Ministry had not responded to the UN criticism by press time.Administrative detention involves judicial proceedings without standard trial and evidentiary procedures, with only the judge overseeing the case getting to see all of the classified evidence and the defendant receiving a mere paraphrase.Most of the world criticizes such proceedings as failing to give the detainees a fair chance to defend themselves. Israel and the small number of other countries who use it say it is sometimes the only way to prevent more terrorist attacks without revealing intelligence sources in open court.A hearing on a petition to the High Court of Justice demanding Kayed’s release is set for Monday after Beersheba District Court Judge Aharon Mishnayot denied his initial request for release. Mishnayot was previously president of the IDF’s Judea and Samaria Courts from 2007 to 2013 and is extremely familiar with administrative detention issues.In early August, Australia reportedly moved toward passing a specific law to place around a dozen prisoners serving sentences for terrorist crimes in administrative detention upon the conclusion of their sentences.“This is an egregious case, in which Mr. Kayed was placed on administrative detention on the day of his scheduled release after completing a 14.5-year prison sentence,” Piper said.Piper denounced the Israeli practice of administrative detention, citing the United Nation’s “long-standing position that all administrative detainees – Palestinian or Israeli - should be charged or released without delay.“The number of administrative detainees is at an eight-year high,” he alleged.Israel is currently administratively detaining more than 700 Palestinians, whereas the average in recent years had been around 200 to 300.Kayed’s hunger strike has gained traction among other Palestinians being held in Israeli prisons who have also undertaken a hunger strike in solidarity with him, according to Piper. Protests have been held outside Barzilai Medical Center in Ashkelon, where he is being held.A number of hunger-striking detainees have been released by Israel in recent years once their health dropped to a point of their lives being in danger. At that point, usually the state has offered a relaxation of detention conditions and a deadline by which the hunger-striker will be released.