“US Latinos are and will be important decision makers. It is important that the Jewish community is an ally and accompanies them in this process,” said Dina Siegel Vann. 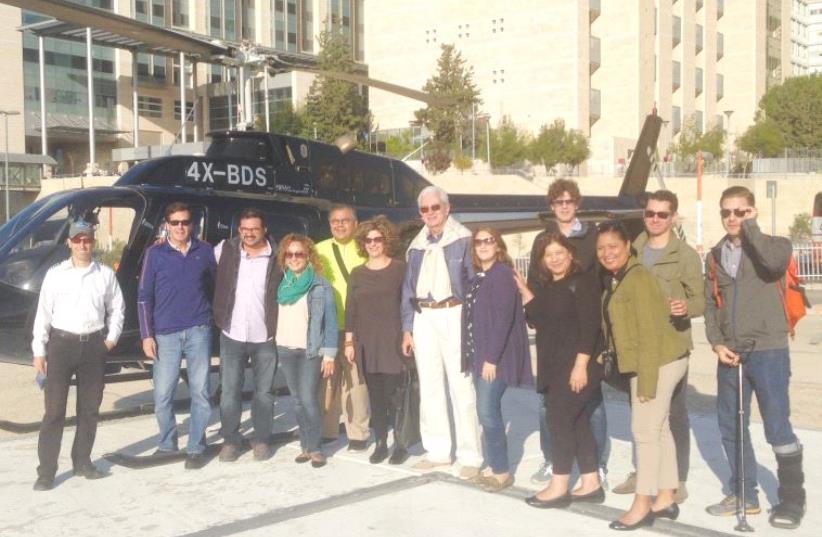 A delegation of US Latino leaders prepare to board a helicopter flight from Jerusalem to the Gaza border
(photo credit: ELIYAHU KAMISHER)
Advertisement
A delegation of Latino opinion and policy leaders from the US toured Netiv Ha’asara on the Gaza border Wednesday, where they contributed to a peace mosaic on the separation barrier.“It’s a beautiful project, but we all know that walls are usually a temporary solution. Hopefully one day it won’t be needed,” said Martin Castro, chairman of the US Commission on Civil Rights. Castro spoke to the Post on Wednesday in a personal capacity, not representing the views of the USCCR. Castro is one of 13 members of the delegation in Israel for six days as part of the American Jewish Committee’s Project Interchange.Since 1987, Project Interchange has brought more than 6,000 diplomats, government officials, civic, religious, media and university leaders from 97 countries to Israel in an effort to promote relations between the Jewish state and world opinion makers.“US Latinos are and will be important decision makers. It is important that the Jewish community is an ally and accompanies them in this process,” said Dina Siegel Vann, director of the AJC’s Arthur and Rochelle Belfer Institute for Latino and Latin American Affairs.A 2012 AJC survey showed that most Latinos in the United States are largely unconnected to American Jews, with only 18% being highly familiar with Jews and 31% not familiar with them at all.Castro believes the American- Jewish experience is a useful model for US Latinos who are trying to organize politically. “We view the American-Jewish community model as one we should emulate,” he said.On the way to Netiv Ha’asara, the delegation flew above the Old City of Jerusalem in a helicopter, admiring the “city of gold,” while also getting an up close look at the complexities of the city’s mixed Jewish-Arab geography.“Everything is so small here,” said one participant as the helicopter ride landed 20 minutes later near the Gaza border.On this fourth day of their tour, participants also heard a lecture on the integration process of Israelis of Ethiopian origin and those who immigrated from the former Soviet Union in the 1990s.Some drew similarities to the struggles facing Ethiopian-Israelis with that of the Black Lives Matter movement in the US.“The solutions you are seeking here are almost exactly the same in the US,” one participant told Fentahun Assefa-Dawit, the director of Tebeka, an NGO that seeks to advance the rights and status of Ethiopian-Israelis.Adolfo Hernandez, who directs community health at the Pritzker Family Foundation, said integration of Arab-Israelis within the Jewish state struck a cord with him.“It’s like having an oppressed minority within an oppressed minority,” he said. “As a child of undocumented parents, I feel like I can relate to both.”Castro said the group has been exposed on the trip to Arab-Jewish coexistence models, such as the Arab-Jewish Community Center in Jaffa, saying he was impressed “when Arab and Jewish communities come together to be full citizens.”Arab-Jewish coexistence did not appear to have advanced since his last visit to Israel 15 years ago, he said, adding: “It’s disappointing that the projects are only in one city or one locality.”Another participant, Maria Quiñones-Sánchez, the first Latina councilwoman of Philadelphia’s 7th District, who represents a diverse community that includes a mix of Latinos, African- Americans, Jews and Palestinian, said that already during the trip she has grown to admire the country’s people and values but is left with unanswered questions.“Is there such a thing as integration and open immigration? How can they have peace, when they live in fear of chaos? How do we create a state of peace, diversity and democracy?” she said in a post on her website.The delegation will meet Thursday with Muhammad al-Madani, a member of Fatah’s Central Committee, in Ramallah and Dr. Tal Becker of the Foreign Ministry to discuss the peace process.