Uzi Dayan: We are committed to our brothers the Druse and this is the time to show it

Dayan said that it is Israel’s duty to help them since it is in the country’s interest that southern Syria is dominated by an entity supportive of Israel and not jihadist groups. 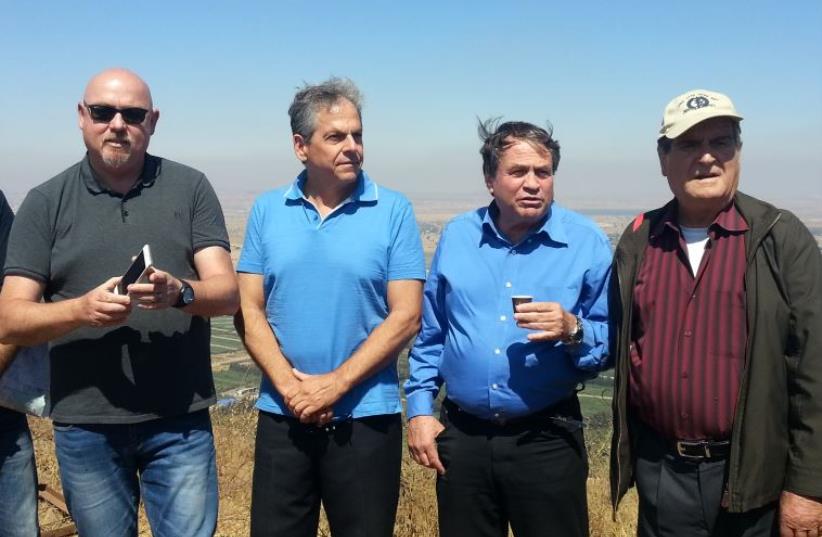 Solidarity rally attended by local Druse leaders and Jewish mayors and members of the Security Council to Israel. Right to Left: Col. (ret.) Gideon Abbas, Maj. Gen. (ret.) Uzi Dayan, Security Council for Israel President Giora Salz , municipal head for the upper Galilee region, Dimi Afrezef, municip
(photo credit: Courtesy)
Advertisement
Maj. Gen. (ret.) Uzi Dayan, head of The Security Council for Israel, called on Monday for Israel to immediately assist Syrian Druse because they face an existential danger that can be averted.“We are committed to our brothers the Druse and this is the time to show it,” said Dayan.The Security Council for Israel, an  NGO founded and headed by Dayan, who previously was the IDF deputy chief of staff and head of the country's National Security Council, works to influence Israel's political and security policy.The Security Council for Israel toured with the Druse in the Golan on Monday in the background of the fear of the security of the Druse in Syria that has grown recently.The Council met with Sheikh Maufak Tarif, the head of the Druse community in Israel.Dayan said that it is Israel’s duty to help them since it is in the country’s interest that southern Syria is dominated by an entity supportive of Israel and not jihadist groups.Therefore, continued Dayan, Israel needs to confirm its commitment to the safety of the Druse in Syria and declare that it will not allow any harm to befall them. Israel should also insist that other countries support this position.Israel also should respond positively to any Druse requests for aid whether it is for weaponry, training of security forces, or humanitarian needs, said the former IDF commander.Syria is disintegrating and its borders are being erased and by extending assistance to the Syrian Druse it will bolster the pro-Israel Druse in the Golan, continued Dayan.Dayan clarified that he is not calling for Israel to send military forces into Syria, but rather providing assistance that would enable the Druse to mount their own defense.The sooner Israel does this, the less need there will be for a military intervention by Israel in the future, argued Dayan.