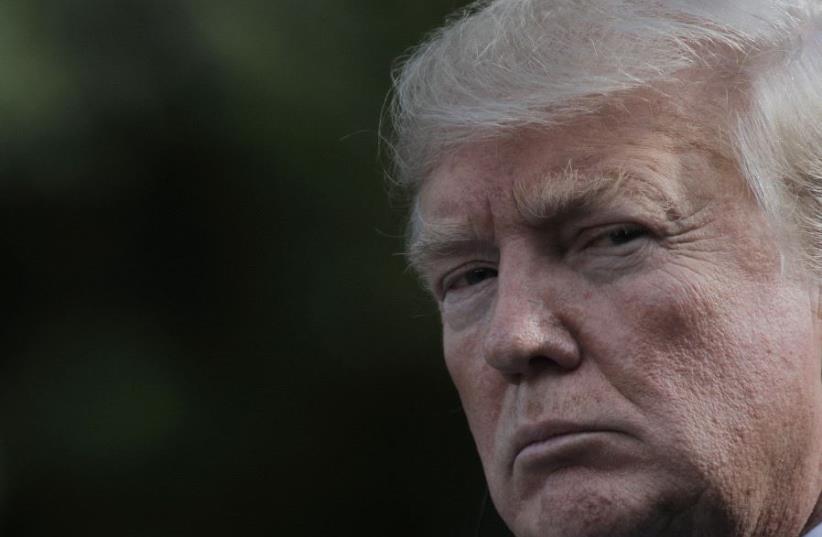 US President Donald Trump looks on during a news conference in the Rose Garden of the White House in Washington, US, June 26, 2017.
(photo credit: REUTERS)
Advertisement
WASHINGTON - The Trump administration shares Prime Minister Benjamin Netanyahu's concerns over Iran's presence in southern Syria, and is working with Israel to prevent it, a White House official told The Jerusalem Post on Monday.Netanyahu seemed to question that commitment over the weekend in Paris, outlining to reporters his opposition to a ceasefire agreement negotiated among Russia, Jordan and the US holding in southwestern Syria since July 11. Israel fears the agreement grants Tehran de facto freedom of movement in a region close to its border.It was a rare rebuke of Trump from Netanyahu, who considers the new president a strategic and political ally."Both governments – the United States and Israel – are rightly concerned about Iran’s malign influence in the region," a White House official told the Post. "A core goal of US policy in Syria is to ensure that no vacuum is created which Iran can fill."Trump officials claim the ceasefire is a successful diplomatic achievement that has prevented Syrian bloodshed and demonstrated the value of cooperating with Moscow. Trump himself said that he is negotiating a second ceasefire that would govern another section of the war-torn country. But critics question whether Russia and Iran are using the pause in fighting to consolidate their gains and regroup for a new offensive.Another administration official told the Post last week that Israel was “not a party to it [the negotiations], but were consulted,” after a national security adviser to the president claimed on CNN that Israel was directly involved in the ceasefire negotiations. Areas under the agreement’s jurisdiction are close to the Golan Heights.A State Department official acknowledged that Israel was indeed consulted "at each step of this important process." In a phone call with US Secretary of State Rex Tillerson on Sunday, Netanyahu reportedly expressed his concerns with the ceasefire and its consequences."We have stayed in close touch with Israel throughout this effort," the official told the Post on Monday. "The secretary made clear that we are committed to pursuing an agreement that de-escalates violence and saves lives while also addressing the very real security concerns of Syria's neighbors, including Israel. Those efforts and our intensive consultations with Israel will continue."Israeli diplomatic sources said that Iran is working to establish air, land and sea bases in Lebanon– a development which Jerusalem cannot tolerate. Their designs extend into southern Syria, Netanyahu asserted.Jerusalem maintains that Iran is not only interested in sending military advisers to Syria, but also is keen on establishing ground and air bases there, something that could radically change the situation in the region. He said that Israel would oppose any agreement in Syria that enables Iranian backed Hezbollah presence there.Herb Keinon contributed to this report from Paris.