By RACHEL MARDER
MAY 20, 2012 21:54
Advertisement
Israeli photographer Adi Nes, who famously turned Leonardo da Vinci’s The Last Supper into a scene in an army mess hall, has returned with a new body of work, shot in the Jezreel Valley and called The Village, showing in three simultaneous exhibits in Tel Aviv, Paris and New York starting this month.The project includes images of kibbutz members working the land, dramatic moments in the life of a family, a young man, alone, with a horse and a choir singing together. The colors are rural, light and dark, the scenes Biblical and echoing of a Greek tragedy, all against the backdrop of the labor Zionist vision. Nes intentionally made the time period ambiguous and environment dreamlike.Photographs like the one of the boy stand in contrast to photographs of the collective, and express an underlying tension between public and private life on the kibbutz, between individual dreams and communal dreams, conforming and standing out, and open and closed spaces. Still, all seems idyllic, the sky is bright blue and the land is green and white. But passion and secrets lurk underground.“Behind the surface the atmosphere is very charged,” says Nes in a phone interview with The Jerusalem Post ahead of the shows’ opening. “The village maybe tells the story of Israel today.”In one shot, a few young men negotiate about a goat with an older man whose hands are raised in despair, which Nes, who was born in 1966 to Iranian immigrants and raised in Kiryat Gat, a development town in the Negev, says represents the next generation on the kibbutz selling away their property as their social environment crumbles around them.Nes, who recently moved from Jaffo to the Jezreel Valley with his partner and four children, photographed in different villages and kibbutzim, sometimes indoors and sometimes in familiar outdoor areas to capture the well-known orchards and landscape for which the valley where the Israelites fought the Philistines is known.He began researching for the project five years ago, soon after he wrapped his series “Biblical stories” (2003-2006). His other critically acclaimed series are of marginalized populations: mainly Sephardi soldiers (1994- 2000), Sephardi boys (2000) and prisoners (2003). Nes takes classic scenes from art history and the Bible and combines them with his own life experiences growing up as a gay youth on the periphery of Israeli society.In all of his projects the viewer can see the issues of Israeli, Jewish, racial and sexual identity that Nes is working through. During his youth, Nes recalls feeling different from his peers and trying to hide his cultural identity. At the same time, he yearned to be part of the group, was active in the Zionist youth movement Hashomer Hatzair and admired kibbutz laborers.In the Soldiers series, the viewer feels the same tension between public life and private life, as some soldiers are shot alone, while many are shot in hearty communal scenes.“In many cases you feel the tension between these two parts of my personality in my art,” he says. “On the one hand you feel part of the group, the nation, the narrative, the dream, but on the other hand you can criticize it.”You can admire the soldier or the kibbutznik, but criticize him at the same time.“When I went to the army suddenly I felt that I was proud,” Nes says. “For me, the Israeli army was still the big melting pot of the Israeli society, like it was called in those days. I felt very proud to serve in the army, to find a place in the group.” 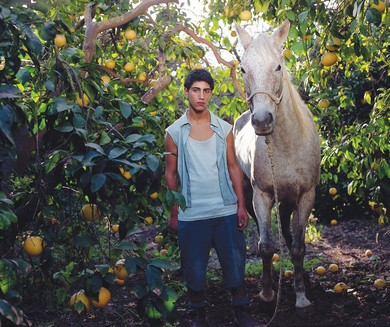 Nes, known for generally working with real people (he seldom uses professional models or actors) in staged scenes, or digitally manipulating his images, traces in the Soldiers series the universal Israeli experiences in the army, the feelings of closeness and group unity, showing soldiers sleeping together and napping alone, urinating outdoors and in battle. He also explores meanings behind Israeli masculinity, as the buff, tan soldiers show off their muscles, roughhouse in the water and wrestle.He says the benefit of working with real people is his ability to capture genuine emotion and authenticity. The chorus photo in the Village was staged after Nes took the portrait of another group of people singing together and staged his models to resemble that group, to resemble a real chorus. In another Village photo, a male soldier appears overcome with emotion. That was no act, Nes says.“He got into this moment when I worked with him.”In response to claims that the Soldiers series is quite homoerotic, Nes agrees, but says that homoeroticism exists in every place in which men are together, including the army, sports and in the street, and everyone will understand what he wants to from the same image.“I’m not a provocative or controversial person,” he says. “I’m trying to express myself... it’s presented in a way that you will find empathy or you will recognize the identity of the other and then you will recognize the identity of yourself. What is the basis of a strong nation if not to recognize ourselves and our neighbors? It starts from there.”A print of Last Supper (1999), part of the Soldiers series which is hanging in the Israel Museum in Jerusalem, sold at auction at Sotheby’s for $102,000 in 2005, and another for $264,000 in 2007.His decision to use the soldier as a protagonist came out of his desire to explore the central place of the army in Israeli identity, and also out of his disturbance at the time that people had forgotten those killed during the Lebanon War, which began when Nes was 18.“I wanted to bring them back to the front of the stage,” he says. “I wanted them to be the heroes of my cultural project.”In the Boys series, Nes drew from childhood, a time when he recalls questioning his identity.“I think my art is composed of all the layers that exist in my personality. In my personality they can live in peace and I think in my art also.”
‘The Village’ is running at the Gallery Praz Delavallade in Paris, the Jack Shainman Gallery in New York and the Sommer Contemporary Art in Tel Aviv from May 31-July 28.
Advertisement
Subscribe for our daily newsletter