J.D. Salinger passes away at 91

By ASSOCIATED PRESS
JANUARY 28, 2010 20:57
salinger 311
(photo credit: AP)
Advertisement
J.D. Salinger, the legendary author, youthhero and fugitive from fame whose The Catcher in the Rye shocked andinspired a world he increasingly shunned, has died. He was 91.
Salinger died of natural causes at his homeon Wednesday, the author's son said in a statement released Thursday by Salinger'sliterary representative. He had lived for decades in self-imposed isolation inthe small, remote house in Cornish, NH.
The Catcher in the Rye, with its immortal teenage protagonist, the troubled,rebellious Holden Caulfield, came out in 1951, a time of anxious, post-War,early Cold War confusion and the dawn of modern, conforming adolescence. TheBook-of-the-Month Club, which made Catcher a featured selection, advisedthat for "anyone who has ever brought up a son" the novel will be"a source of wonder and delight — and concern." 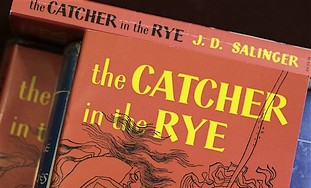