The bar mitzva edition of the Tzlilei Yaldut Festival promises to delight children with its impressive lineup. 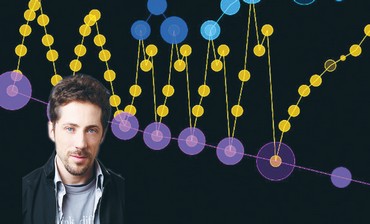 THE ICONCERT will be a humorous affair with Idan Alterman (Courtesy)Also in the big gun category is the iConcert slot, which is described as “classical music with 3D technology.” This is a first local airing for the Music Animation Machine technology devised by Stephen Malinowski. The invention allows audiences to not only hear music played live in concert but also to appreciate the sounds through their sense of vision, whereby the notes being played are displayed in various colors and enhanced through the provision of 3D glasses. The iConcert show will be a highly entertaining and humorous affair, with actorcomedian Idan Alterman playing the role of the mad scientist. It also stars acclaimed Swiss violinist Etienne Abelin, who will operate the technology and computers together with the Israel Camerata Orchestra, Jerusalem.The 75-minute show is for children from the age of four and will be followed by a workshop where the kids will be able to use the technology themselves.“There is a Music Animation Machine clip on YouTube, which I believe has been viewed 100 million times. I think this is the future of music education,” Leshman declares.Meanwhile, budding violinists will be able to avail themselves of the polished teaching services of some top-notch classical musicians, such as Hagai Shaham and Itai Shapira at the Ilona Feher Master Classes for Young Violinists. Feher was an internationally renowned Jewish Hungarian violinist and teacher whose past students include the likes of Pinchas Zukerman, Shlomo Mintz and Shaham. Feher spent the last two decades of her life as a resident of Holon.Elsewhere in the jewel-strewn three-day program, you can find the How a Song Is Born session at which Yehonatan Gefen will share some of the secrets of his writing craft with small children and their parents. There will also be quite a few dance and music shows over the three days, including a performance of Clothes Stories by the Fresco dance company choreographed by Yoram Carmi; the Story Flutist musical show directed by Yarden Bar-Kochba; and the Pinocchio Dell’arte production that incorporates music, acrobatics, masks and puppet theater.Leshman is happy with the mix of events in the festival program.“Where else could you come across Sarit Hadad, Hagai Shaham and Stephen Malinowski?” he says.“We have managed to bring them together at the festival, and there will be some wonderful musicians playing for the children. We should always aim to give children the best quality musical entertainment we can.”