Forester for a Day

A unique experience for tourists in KKL-JNF forests. A new KKL-JNF project offers groups of tourists from all over the world a unique and exciting experience: working as a forester for one day.

By KKL-JNF STAFF
KKL_200711_A
(photo credit: KKL-JNF)
Advertisement
A new KKL-JNF project offers groups of tourists from all over the world a unique and exciting experience: working as a forester for one day. The Forester for a Day project will allow visitors to work alongside KKL-JNF foresters, carrying out hands-on woodland-maintenance tasks, getting to know the country, learning about nature and making their own personal contribution to the upkeep and development of the forest. During their visit to Israel tourists will enjoy the memorable experience of a day’s work in the forest, at the end of which they will be presented with a certificate in recognition of the contribution they have made. Forester for a Day project will also connect people with nature. It will strengthen ties with all communities worldwide and allow visitors to interact directly with the countryside around them as they work in the forest. And, of course, the forests themselves will benefit from the loving care they will receive. The volunteer foresters will undertake a variety of tasks essential for forest conservation: pruning and removing low branches that speed the spread of flames when fires break out; cutting paths, to prevent fires from spreading; and removing pruned material, which can catch fire. The Forester for a Day pilot project is being launched now in the Carmel Forests, which about six months ago suffered the largest fire in the annals of the Israeli state. Dozens of people were killed and the woodland was badly damaged. In the future the project will be expanded and extended into other parts of the country. KKL-JNF’s Tourism Department held a special Launch Day on Mount Carmel at 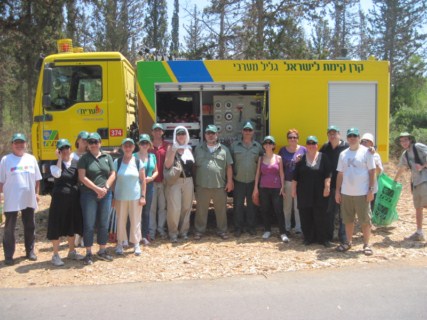 KKLwhich they presented the new project to dozens of tourism agents responsible for bringing thousands of tourists to Israel from all over the world. Now that the agents have learned about the project, they will be able to offer it to groups of tourists interested in experiencing a day of unique activity in the forest. The Launch Day included lectures about the project and about KKL-JNF in general, a film, a bird’s eye view of the scorched areas, a tour of the Carmel and hands-on experience of forestry work under the professional eyes of KKL-JNF foresters. This program is similar to the one that will be offered to tourists who chose to take part in the project. While the tourism agents listened to explanations in the conference hall at Nir Etzion, their children took part in activities organized by KKL-JNF one-year-program volunteers. Esther Weinstein, Director of KKL-JNF’s Tourism Department and one of the project’s initiators, opened the event and explained that the project is designed to offer tourists a new type of activity, which will enable them to form a real bond with Israel. Dafna Nof, Director of Carmelim Tourism Association reviewed some of the local tourist attractions: trails for hiking, jeep excursions, cycling or horse riding; a variety of extreme sports activities in natural surroundings; wineries; art exhibitions; and, of course, the enchanted woodland landscape.   Zeev Kedem, Director of KKL-JNF’s Fundraising Department, emphasized that the message behind the organization’s Forester for a Day project is “Come and take part in what we do – share our experience, lend a hand and work together with us to ensure that there will be no more fires here.”After the lectures, the visitors went to a lookout point close to Nir Etzion to observe the burned areas from above, with Michael Weinberger, Director of KKL-JNF’s Western Galilee region, as their guide. He told his guests about the Carmel fire and of KKL-JNF’s role in battling the flames, and described the long rehabilitation process that the area would have to undergo. Volunteers and tourists would play a vital part in preventing the outbreak of future fires, he said.Nature, however, waits for no one, and it has already begun to assert itself. Mount Carmel is regenerating on its own, but human intervention is necessary to protect the forest from additional outbreaks of fire and to create picnic and recreation areas to replace those that went up in flames. The tourism agents did more than just look and listen: they were quite prepared to roll up their sleeves and get to work. Equipped with saws and pruning shears, they pulled on gloves and went out into the field. Lital Ganini, a tourism agent from Rishon LeZion, told us that activities of this kind would appeal to tourists who have visited Israel in the past and now want to experience the country from a slightly different perspective. “The contribution they will be making to the restoration of Mount Carmel will provide them with a very special experience,” she said.
Tourism agent Orit Buchni of Tel Aviv added that these activities have great value and importance for tourists. “It’s a good way to get in touch with nature, make a contribution and get involved in significant ecological activities,” she said. Ela Gefen, also from Tel Aviv, agreed: “It’s a great idea that’ll suit all those people who want to feel that they haven’t just come here to tour the country, but to get involved and give something of themselves as well.”
For Articles, comments or use please contact
Ahuva Bar-Lev
KKL-JNF – Information and Publications
Email: [email protected]
Phone: 972-2-6583354 Fax:972-2-6583493
www.kkl.org.il/eng
Advertisement
Subscribe for our daily newsletter