Israel gets 'Happy' at the UN

Tel Aviv adaptation of hit song "Happy" was chosen by singer Pharrell Williams to take part in the UN’s International Day of Happiness. 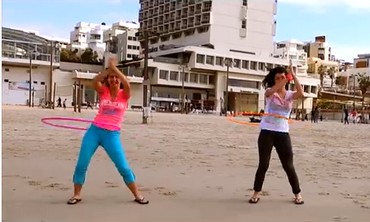 When the non-profit news and educational organization ISRAEL21c (www.israel21c.org) took a camera out onto the streets of Tel Aviv to film its own version of the Pharrell Williams Academy Award-winning song “Happy,” its goal was to create a feelgood video that would give people abroad a different view of the city.Just over two weeks later, the Grammy-winning artist chose the Tel Aviv adaptation of his hit as one of the best in the world, and invited it to be submitted for use in the UN's second International Day of Happiness. Since its release, more than 759 tribute versions of Williams's song have been uploaded to Youtube from 92 countries.In Israel alone there are about seven versions of the song.To celebrate the International Day of Happiness on March 20, Williams teamed up with the United Nations Foundation to choose the best 80 or so of these videos and stream them throughout the day on the Web, putting them up at noon in each time zone.ISRAEL21c’s version, “Happy Tel Aviv-Yafo,” was the only video from Israel chosen to take part in the event. You can catch it in hour 11 at the site 24 Hours of Happiness (www.24hoursofhappiness.com).“We are delighted that Pharrell Williams and the UN chose our video for the day of happiness,” said Nicky Blackburn, editor and Israel director of ISRAEL21c. “People abroad often have certain assumptions about Israel, so this was a really wonderful opportunity for us to be able to show the world what an incredibly joyful and happy place Tel Aviv actually is. Being able to do so as part of a UN event was even more significant.”ISRAEL21c’s video was filmed in a two-day shoot using volunteer dancers, many who joined in spontaneously on the street. It was shot at several locations around the city, including Habima Square, Neve Tzedek, Dizengoff, Rothschild Boulevard, Tel Aviv Port and the beach.Since it was uploaded to Youtube on March 3, it has been viewed over 210,000 times in 194 countries, shared widely on the web and featured on TV. Viewers come not just from North America, Europe and Asia, but also from unexpected countries like Iraq, Egypt, Lebanon, Pakistan and Syria.“We’re so excited about the success of this film,” said Blackburn. “Israel often scores highly in world happiness surveys and it was a pleasure to show the world why. We thoroughly enjoyed making the film and seeing the spirit of Israel come alive for thousands of people around the world.”
Advertisement
Subscribe for our daily newsletter