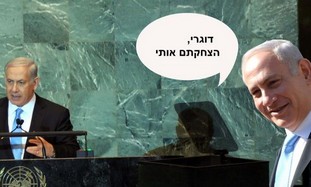 Bibi "bombs" himselfShortly after Gilad Schalit was , Prime Minister Binyamin Netanyahu made sure to be photographed with him, and subsequently faced criticism. Then, Netanyahu turned into an internet meme – "Bibi bombing." Mimicking the awkwardness of Bibi smiling in the background while Gilad and Noam Schalit hugged, fans of the meme have photoshopped the Prime Minister's mug into famous photographs. Some have Bibi watching approvingly as Jack and Rose kiss in Titanic, another "Bibi bomb" shows him on by the plane in Casablanca's final scene, and yet another has him grinning in the iconic picture of US President Barack Obama and others learning that Osama Bin Laden was killed. An entire blog was created in honor of the meme. Netanyahu then responded on Facebook with his own "Bibi bomb," in which he is watching himself speak at the UN, with a bubble saying: "You really made me laugh!"Halloween isn't a Jewish holiday, but this year's hit costume is a member of the tribe – Anthony Weiner. All you need is boxers, an undershirt and a cell phone. The Forward reported earlier this month that popular costume shop Ricky's NYC is selling a grimacing mask that resembles the disgraced New York congressman. In other Jewish Halloween costumes, Ricky's also sells a Bernie Madoff prison uniform with matching handcuffs.For a TV show about New Yorkers, Gossip Girl does not have many Jews – only central character Blair Waldorf's stepfather, portrayed by Wallace Shawn. Every episode of the evening soap centers around one event, which all the characters attend, and this week, it was a Yom Kippur breakfast at the Waldorf resident. In honor of the high holiday-themed episode, the show came out with a guide for the Gossip Goy, complete with a chauffeur/shofar pun:For some real-life New York gossip, Schmooze favorite couple Jared Kushner and Ivanka Trump took their two-month-old daughter Arabella to synagogue on Succot with Lulav and Etrog in tow last week. The Daily Mail wrote that Kushner "held some flowers in one hand – perhaps a gift for his wife." Oops.If you like zombie and Jesus jokes, then you'll like Are You Ready To Rapture – a video portraying the second coming as the return of The Jewish Zombie who "died for your sins and came back for your brains." Warning: This video is probably offensive to Christians, and has some animation that is not safe for work.Are you a mensch? Do you live in San Francisco? You may be a candidate for the “Bay Area Mensch of the Month” calendar. Dana Hall and Elizabeth Shapiro are looking for 12 nice Jewish boys for the project, meant to raise money for the SMART program, which provides scholarships to underprivileged children to attend private schools. The deadline for submissions is December 1 – if you fit the bill, check out http://menschofthemonth.wordpress.com.The Weekly Schmooze collects the hottest Jewish culture news from around the world. Ranging from celebrities to philanthropy to quirky communities, we're here to schmooze about Jews. If you have any news to share with The Weekly Schmooze, write to: weeklyschmooze@gmail.com.