Articles of Clothing: Edge at the Dizengoff Center

Documenting Israelis and their knack for looking fantastic, no matter what the occasion.

By LAUREN IZSO
Lena Kod
(photo credit: Lauren Izso)
Advertisement
The morning hustle and bustle is underway outside the Dizengoff Center in Tel Aviv. As buses come and go, people crowd around the shelter, hoping each bus that approaches is the one they are waiting for. Sipping her coffee, Lena Kod is taking advantage of her last few minutes of freedom before her shift, and she looks good doing it.When you get dressed in the morning, your clothes should match. This is one of the first life-lessons every little girl learns from her mother. We are taught that if we are mismatched, we will somehow look unkempt. Sadly many girls live their lives believing that beauty is in the perfection of exact color pigmentation, and don’t recognize that sometimes the exact opposite is true. Kod, 25, is a prime example. Clean and couture are two words that never appear in the same sentence. 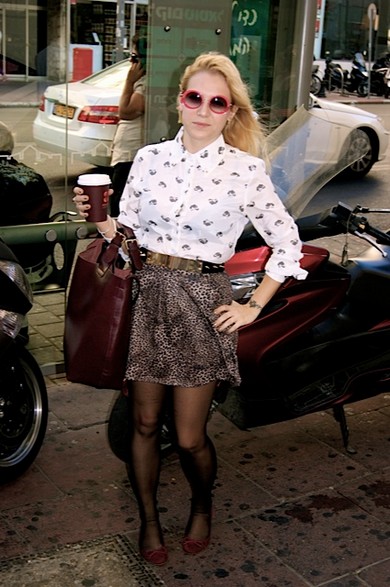 Lena KodOf course that’s not always true, and there is such a thing as too much. Kod’s edginess, however, is anything but too much. Having said that, combining patterns must be taken seriously and executed thoughtfully, or else it can be disastrous. Here are some rules to live by when attempting to wear complimentary patterns:1. Size does matter
Pay attention to the size and volume of the pattern. Volume can refer to how vibrant the colors are, or the physical size of the images. Make sure one print is busier than the other. The animal print compliments her blouse nicely because the color is significantly more vibrant, creating a nice contrast.2. Minimal matching
Don’t live your life according to a color scheme, but some color coordination is acceptable, if done correctly. You can never go wrong with matching your bag to your shoes. Always a win. Kod’s burgundy tote and matching flats pull her outfit together fluently.

Lena Kod3. Belt it
If ever in doubt of anything: belt it. A belt is always a simple solution to outfit uncertainty. Whether you want to make it more fitted, if you want to separate colors, or you just want that fabulous vintage skirt that you found in your bubbie’s closet to stay up: belt it.

Patterns don’t have to be unpleasant. With the right aesthetic balance, more than one pattern doesn’t have to be overwhelming.“I want to look put-together, but not too frigid. I always wear clothes that don’t go together, and I make them work,” says Kod.Just like you did when you were a little pisher, choose clothes that your eye is drawn to. Don’t listen to that silly voice in your head that tells you to match.Kod’s fun patterns don’t make her look outrageous. She is able to use the careful combination of contrasting patterns to let her eccentric personality shine through, but not explode all over the concrete floor. Just like when you were a toddler and your mother told you not to eat too much junk food, or not to watch too much television, everything should be in moderation: Clothing included, especially when dealing with something as delicate as pattern.

Try it: Combine your two fave patterns (keeping rule #1 in mind) and punctuate your outfit with a neutral bag, and matching shoes. Again, matching bag and shoes never lose.

Warning: Patterns can get very exciting, and as tempting as it may be, refrain from adding a third pattern to the color palette. Two are more than enough, and if you wear three, you risk looking like a kindergarten class attacked you with magic markers.Follow @laurenizso