By LAUREN IZSO
Bryanboy and Rumi Neely
(photo credit: Noa Magger)
Advertisement
“I wanted to know why Israeli fashion is the way it is,” said fashion blogger extraordinaire Daniel Dykes, sipping his cocktail at the super chic and newly-renovated Rothschild Hotel in Tel Aviv last week. Dykes was in Israel along with four other of the most-read style critics in the online fashion community who accepted invitations from Kinetis,an Israeli non-profit educational organization, to tour Israel and learn about Israeli style culture. Joanna Landau, the founder of Kinetis, says she organized the tour to demonstrate Tel Aviv’s wealth of creativity, innovation and entrepreneurship. Dykes, the editor-in-chief at along with Bryanboy of BryanBoy.com, Ada Alti of Trendland, Rumi Neely of Fashion Toast, and Robb Young of A Shaded View of Fashion, all had one thing is mind when they boarded their flights to the Holy Land: What on earth is Israeli fashion? 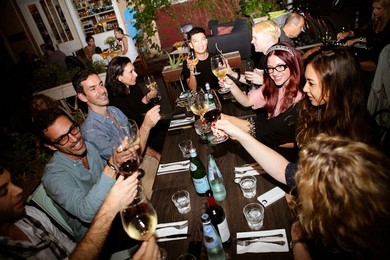 (Noa Magger)
As part of the tour, Kineits hosted the first ever Vibe Israel fashion bloggers event, which involved an evening of cocktails and high fashion at a trendy boutique hotel in the company of the Israeli style community. Also included in the bloggers’ invitations was a week-long series of tours and workshops with some of Israel’s most successful designers.Dykes traveled to Israel all the way from Australia, and found something he did not expect, he told The Jerusalem Post. He was impressed by the fashion, and admitted that it was much less conservative than he predicted. Dykes said that he expected to find more Hasidic Judaism embedded into the fashion culture but found something way more relaxed, younger, and with much less “parental control” than he had anticipated. 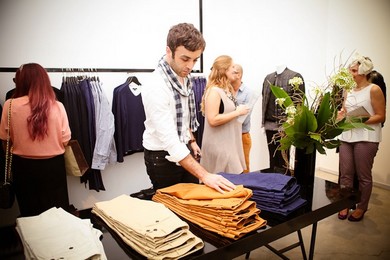 (Noa Magger)
But what really surprised him was what he learned about Israeli culture.“Understanding comes through experience,” Dykes wrote on his blog, which has 1.6 million readers. “And what you’ll experience is the fact that the country’s cultures, its fashions and its geo-politics are intertwined.” US-based Filipino blogger, Bryanboy took to Twitter to express just how much he enjoyed himself and his experience in Tel Aviv:

Toda Raba Tel Aviv! I love you and your amazing and kind and hospitable people.

The team spent time with many impressive fashionistas including local designer Dorin Frankfurt, who also attended the Rothschild Hotel event, Maya Negri, Danielle Lehavi and many more.Bryanboy enjoyed spending time with fashion Guru Dorin Frankfurt so much that he is featured in a Vibe Israel Twitter post, sporting a Dorin Frankfurt crown:

While spending time in the Old City of Jerusalem, Bryanboy enthusiastically participated in old Jewish customs as the Western Wall. He is the only person that makes a kippa look trendy.

Dykes was also excited for the Old City and told the twitter-verse that visiting Jerusalem was on his bucket list. This is just how excited he was:

Up and about and heading to Jerusalem. As excited as a school girl meeting Justin Bieber, just with fewer hormones.

Alti also tweeted about her affection for Israel as she was getting ready to head back to Greece:

The event clearly left an impression on these young fashion bloggers, as confirmed in their social media coverage. Event organizer Landau says she plans on holding this successful event and others like it again in the future since it’s clear how much of an impact Israel’s creativity can have on the world. Kinetis has organized four blogger events in the past year, this being the fifth. “There is nothing like the excitement bloggers create,” Landau told the Post.“It is the most efficient way of reaching people. The bloggers at this event have a combined readership of 10,000,000.” The Kinetis organization is committed to promoting Israel as a major contributor to the world’s creativity and innovation. The Vibe Israel events in the past have invited leading “mommy-bloggers”, food bloggers and design bloggers, however this is a first for fashion.Landau added that the reason behind this endeavor is to establish the initial building of relationships with other countries though fashion, and through the eyes of bloggers who are being directly immersed into authentic Israeli culture.“We want to advance the conversation past politics and conflict, and expand the lens through which the world sees Israel,” said Landau.Landau says that each event has been successful because they choose topics according to certain criteria. Firstly, there must be a large online following, and secondly, Israel must have an entrepreneurial basis in the field. “With the constant tweeting, posting, tumblr, and instagram, they are getting their readers excited,and at the same time our local community is excited and proud of what we have to offer the world,” Landau explained.Landau described the Vibe Israel events as a sort of “blind-date” experience. “We can only put our best foot forward and hope everyone enjoys themselves,” she said.By being directly immersed in Israeli culture, these Internet style journalists and their readers have little choice but to form their own opinion, but as Landau puts it, “You can’t not fall in love with Israel.”The hotel event also included an exhibition from graduating class of Shenkar College’s fashion design program who showed off their final projects to the international bloggers.

(Yoni Cohen)
While bloggers were posting on twitter, design student Mark Goldenberg’s bird-inspired collection did a different kind of tweeting. Inspired by Israeli sculptor, Nachum Gabba, his designs use color, movement and shape to embody the delicacy of his favorite flying species. The dresses, made primarily of silk organza are a combination of architectural and artistic design. He says the every piece of his collection is a rare species of the wild. 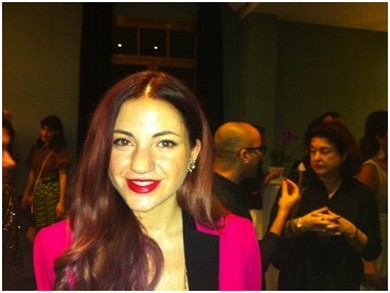 Ada Alti (Yoni Cohen)
“These clothes have nothing to do with anything mainstream. Israeli fashion is game changing,” said Alti, who traveled from Greece, and was dressed to impress for the soiree.
Advertisement
Subscribe for our daily newsletter