Trendspotting: The Looks of a Year to Come (part II)

From New York, to London, to Paris and Milan, five overriding trends from the Fall/Winter 2011 Fashion Weeks.

By KATHRYN RUBIN
Prada 311
(photo credit: Reuters)
Advertisement
While spring has just arrived to the northern hemisphere (and for those still enduring the subzero temperatures, it still feels quite far away) the fashion industry has already provided the world with a glimpse of the styles that we will be sporting this time next year. While the fetish inspired Louis Vuitton collection may have seemed so distant from Gucci’s dandified 1940s styles or Dolce and Gabanna’s boy meets girl line, all the shows had certain underlying “themes” that connected them to each other. RELATED:
Ciao Bella: La Moda Italiana
The City of Lights: A la Mode So after a month long fashion carousel ride from New York, to London, to Paris and Milan, here are five of the top trends for Fall/Winter 2011. Fabulous FurAttention animal right activists, you'll want to start preparing your protest signs already, as fur is back for the Fall/Winter 2011 season – and in a furious way. For the past few winter seasons, designers have dabbled in fur, incorporating the material into several different pieces; however, at the fall/winter 2011 shows, fur was not only present, but it stole the spotlight. From faux to real, from long to short, from a simple trim to a complete piece, and from neutral colors to bold eye-popping hues, fur tops the fall/winter trend list. In Paris, Jean Paul Gaultier grabbed his audience's attention with a mink and tweed coat, while others appeared in fur-trimmed puffers, and Russian fur hats (below). In New York Marc Jacobs created oversized fur collars and Prabal Gurung topped off elegant lace ensembles with half jackets embellished with fur.Jean Paul Gaultier Jean Paul Gaultier However, nowhere was the upcoming fur trend more apparent than in Milan where Prada dazzled its audience with a shaggy salmon-hued fur covered coat (below) and Versace showcased white fox sleeves. And then of course there was Gucci, where designer Frida Giannini sent models cascading down the runway in magnificent jeweled toned stoles made from fox, mink and goat hair (below). Gucci 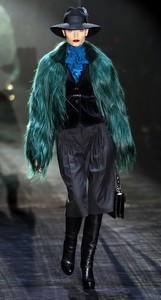 GucciLavish Lace The lace trend, which emerged in last fall’s spring/summer 2011 shows, continued to intertwine itself into almost everyone of the Fall/Winter 2011 collections. From the plains inspired Rodart collection, where Kate and Laura Mulleavy incorporated neutral toned lace, to the fetish inspired Louis Vuitton collection, where Marc Jacobs decorated his sexed-up uniforms with the material. While the American designer wowed audiences in Paris with his outrageous Louis Vuitton collection, Jacobs also impressed his audience back at the New York fashion week, where he showcased an entire ensemble made out of dark blue lace. However, nowhere was this emerging lace trend more apparent than at Jason Wu's show, where the young designer used 15 different kinds of lace to create an array of stylish (baroque inspired) silhouettes with lace sleeves, skirts with lace panel overlays, gold lace gowns, and even mini lace veil masks covering half the face of some of his models. Spectacular ShadesWhile some of the designers, like Channel and Jill Stuart, stayed true the classic winter somber hues, most opted for vivid eye-popping color palettes. The fall 2011 runways were literally littered with bursts of cobalt blues, deep purples, and emerald greens as well as dashes of saffron yellows, ruby reds and foxtrot pinks.In Paris, the French catwalks were filled with shades of blue as many of the Parisian houses, such as Dior and Yves Saint Laurent, decked models head to toe in rich variations of this primary tone (Dior below). Even London, traditionally a gray city, was alive with colour as Burberry Prorsum sent models streaming down the runway in bright oranges, baby blue and fire engine red variations of the brand’s classic coat (below). The “Coats of Many Colors” collection, designed by Christopher Bailey, even dared to alter the brand’s notorious plaid prints, throwing dashes of red and yellow amongst the black and gray prints. 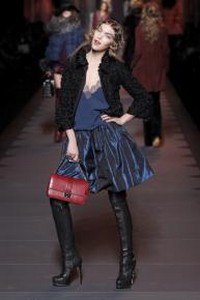 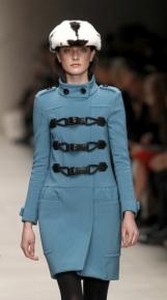 GucciThe Bottega Veneta fall color palette was filled with bright pops of fuchsia, blood orange and mustard yellows (below); while at the Gucci show, Frida Giannini played with different jeweled tones, mixing and matching tones of deep purples, peacock blues, teal greens and fuchsias with each other as well as with different rusty shades. At the New York fashion week, it was the Libertine line that really dared to take advantage of the full color spectrum as Jonathan Hartig's dramatic use of bold tones and bright hues put a modern spin on his 1960s inspired line. 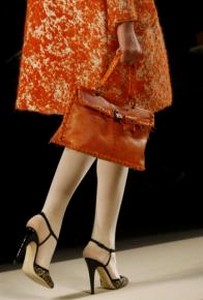 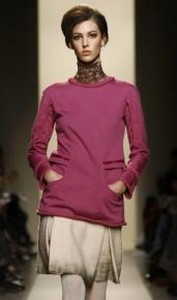 Bottega VenetaAppealing AndrogynyWhile sharp, form fitting tailored suits will never go out of style, designers appeared to have relaxed their menswear-inspired styles for next year’s wintry season. Next year's borrowed-from-the-boys look is not just about pairing a tux jacket with snug pants and super high heels; instead, it's about a playfully androgynous look combined with a slightly “grunge” and relaxed effect. Nowhere was this trend more apparent than at the Dolce and Gabbana show where the designer duo sent models parading down the runway crisscrossing between menswear inspired styles and sexy feminine silhouettes.  Models dressed up as boys emerged in pinstriped banker suits with torn off sleeves, skinny short pants, double breasted jackets, suspenders and porkpie hats (below). Over at Chanel, jackets were styled in layers of  tweed and loose fitting cuffed wool pants were paired with flat boots (below); while at the Stella McCartney show, the British designer displayed several extra-wide-shouldered blazers that nearly doubled the width of the model’s tiny shoulders. Dolce and Gabbana 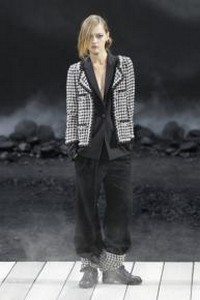 ChanelPlush Patterns While no one pattern reigned above the rest, there were several front runners that are sure to find their way into our fall/winter wardrobes. Plaid and checkers are classic Fall/Winter staple items, but for next season designers appeared to have found inspiration in brighter, bolder and dressier plaids rather than the cozy flannels seen in previous years. From Burberry Prorsum’s 60s styled checkered coats to Prada’s drop-waist block-colored silhouettes with checks in purple and red, there was no escaping this board game pattern. 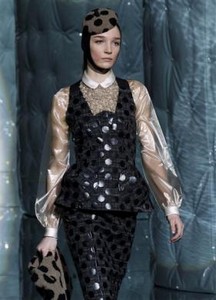 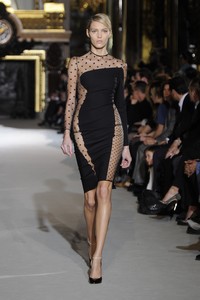 Stella McCartneyPolka dots was another pattern that was scattered across the runways - in abundance.  While polka dots are typically reserved for children (and mini mouse), the looks shown on both sides of the Atlantic, proved once and for all that this geometric print has definitely grown up.  From tights, to dresses, to jackets, Marc Jacobs embraced the “dot”, making it elegant and sophisticated (above); while in Paris, Stella McCartney showed off her cheeky sense of style sending models out in a series of slinky tight polka dot dresses (above). 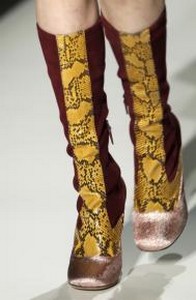 GucciGucci In Milan, the snakeskin pattern slithered its way on to almost every runway as the biggest names in the industry incorporated this reptile print throughout their collections. Prada's line-up included python trompe l'oeil Mary Jane high heels (above) and over-sized snakeskin coats; while Missoni paired Easter-egg colored ensembles with snakeskin dusters (above). Over at Gucci, the reptile pattern was everywhere as Frida Giannini sent models down the runway in multi-colored python jackets, teal green reptile print skirts well as a series snakeskin bags (below). 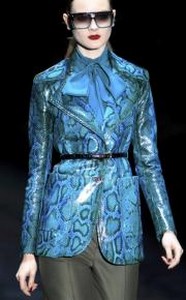 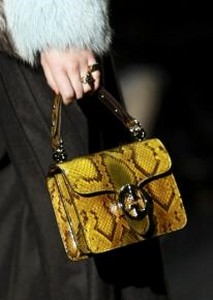